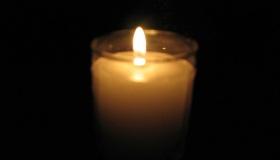 Jews engage in numerous practices to commemorate a yahrtzeit for the anniversary of a relative’s passing, generally a first degree relative [1]A first degree relative is defined as a father, mother, son, daughter, brother, sister and spouse (Shulchan Aruch YD 374:4). for whom one would observe mourning. What are these practices and on what date are they observed?

Determining the Date for a Yahrtzeit

If the person died in a different time zone than his relative, the yahrtzeit is determined based on the time and location of the person who died, independent of where the relatives may be. [14]Gesher Hachaim, volume 1, 32:14. See however Penei Baruch 39:40 who cites other opinions as well.

Some claim that a yahrtzeit is only observed for fifty years, but the common custom is to observe a yahrtzeit forever. [15]Nitei Gavriel, volume 2, 77:22

There is a custom to light a candle for the yahrtzeit of a relative. This custom is mentioned in the Magen Avraham in a completely different context. The halacha states that when there is a great need, it is permitted to ask a non-Jew to perform a forbidden act at the beginning of Shabbos, after sunset but before it gets dark (tzeis ha’kochavim). [16]Shulchan Aruch 261:1 The Magen Avraham [17]OC 261:6 says that since people are so careful about lighting a candle for their relatives’ yahrtzeit, it is considered a great need, such that one would be able to ask a non-Jew to do so at the beginning of Shabbos. It is also permitted to light the yahrtzeit candle on the night of yom tov, since he will benefit from its light, but he cannot light it during the daytime of yom tov, since that will not serve a purpose. [18]Gesher Hachaim, volume 1, 32:4. One could argue that this does not apply nowadays when the house is fully lit on Yom Tov night with electric lights. Also, this is difficult for the Penei Baruch, … Continue reading

Fasting on the Day of a Yahrtzeit

The Shulchan Aruch [19]YD 102:12 and OC 568:1 and 568:7. rules that it is proper to fast on the yahrtzeit of a parent. Furthermore, the Rama [20]YD 391:3 rules that one should not participate in a meal on the night of a yahrtzeit, even though the fast has not yet begun. However, the Pischei Teshuva [21]YD 391:8 quotes the Mekom Shemuel who limits this to abstaining from a meal for a wedding, but not for the meal of a bris, pidyon ha’ben or siyum. If the yahrtzeit falls on Shabbos or Rosh Chodesh, according to the Shulchan Aruch [22]OC 568:9 one would fast on Sunday, but according to the Rama, [23]There one need not fast at all in such a case. The Rama [24]There also adds that this is the halacha on any day on which Tachanun is not recited.

The Taz [25]OC 568:5 writes that if somebody is one of the key players in a bris – which generally includes the mohel, sandak and father of the boy – he is exempt from fasting. The Gesher Hachaim [26]32:7 suggests that this should be extended to a siyyum; however, the Shach [27]YD 246:27 quotes from the Maharil that one should not eat at a siyum when he has yahrtzeit. The Gesher Hachaim [28]32:7 suggests based on the Beis Lechem Yehuda that one can eat at his own siyum on a yahrtzeit, but should not partake at a siyum made by somebody else. Some say [29]Nitei Gaviel, volume 2, 72:6 that learning two pages of gemara with the commentary of the Rosh is somehow equivalent to fasting, and one can fulfill the custom of fasting in such a manner.

The practice of fasting on a yahrtzeit is much less widespread today than it once was. The Minchas Yitzchak [30]Minchas Yitzchak 6,135. See also Nitei Gavriel, volume 2, 72:1. explains that since it is difficult for many people today to fast, many have the practice to instead sponsor a “tikkun” for the yahrtzeit, meaning that they provide food for everyone in their synagogue. By doing so, they gain the mitzvah of tzedaka (by giving this food to the poor), as the recitation of and answering “amen” to the blessings on the food, in memory of the deceased relative of sponsor.

Shulchan Aruch [34]YD 344:20 rules that when a wise person dies, we visit his grave at the end of twelve months. The custom has developed to visit the grave of any departed relative on his yahrtzeit. [35]Gesher Hachaim, volume 1, 29:1 and 32:5. He also cites the Tiferes Yisrael in Eduyos 2:6, but there appears to an issue with the girsa (textual variant) there. Some say that even one whose relatives are buried far away and will not be able to go them on the day of the yahrtzeit, should still go to another Jewish cemetery nearby. [36]Nitei Gavriel, volume 2, 76:10 Some also say that even a kohen, who cannot enter a cemetery, should nevertheless go close to the cemetery. [37]Nitei Gavriel, volume 2, 76:11 The custom is to recite Psalms chapters 32, 16, 17, 72, 91, 104 and 130 while at the cemetery; [38]Gesher Hachaim, volume 1, 29:3 and 32:5. although normally it is not proper to perform mitzvos in a cemetery since the dead can no longer perform mitzvos, it is permitted to recite words of Torah in honor of the memory of the deceased even in the cemetery. [39]Shulchan Aruch 344:17 The Chazon Ish is reported to have said that one who is learning full-time in yeshiva need not leave in order to visit his relative’s grave, but rather should learn extra that day. [40]Nitei Gavriel, volume 2, 76:3

The Rama [41]YD 376:4 rules that one always recites kaddish on a yahrtzeit, and if he is able to, he should lead prayers as well.

In a place where only one person says kaddish, [42]The custom in most communities in the past was that only one person said each kaddish. This is clear for Rama (YD 376:4), Taz (YD 376:4), Shach (YD 376:7-13), as well as Biur Halacha (132), from the … Continue reading the Rama [43]YD 376:4 rules that somebody within shiva (the first seven days of mourning after the death of a relative) would take priority over a yahrtzeit; if there is somebody in sheloshim (the first thirty days of mourning after the death of a relative), the yahrtzeit gets one kaddish and the person in sheloshim gets the rest of the kaddeishim; and if there is somebody in the eleven-month period of saying kaddish for a parent, the yahrtzeit gets all of the kaddeishim. The Biur Halacha, [44]Biur Halacha 132 however, rules that a yahrtzeit is entitled to one kaddish even in the presence of somebody in shiva, and that somebody in the eleven months of saying kaddish for a parent is entitled to certain kaddeishim which are external to the main part of the prayer service, such as shir shel yom. In any case, the Rama [45]YD 391:3 himself rules that if there is a varying local custom, we follow the local custom regarding the matters of how to distribute kaddish.

Additionally, the Rama [47]OC 581:1 quotes the practice in many communities during the period of selichos, that the person who leads the services for selichos is entitled to lead all of the prayers for the entire day. [48]There is a debate among the commentaries on the Shulchan Aruch if this is coming to include just Shacharis and Mincha, or if it even includes Maariv the night before, see MB 581:14. The Mishnah Berurah [49]581:14 quotes the Magen Avraham [50]OC 581:7 that he has priority even over a yahrtzeit. However, the Mishnah Berurah [51]581:14 also brings the opinion of the Eliya Rabba and Pri Megadim that if the yahrtzeit is fasting he should be allowed to lead services even during the period of selichos.

The Rama [52]YD 265:11 also quotes a practice that when there is a bris (circumcision), the mohel (the one who performs the bris) leads the prayer service. The Shach [53]YD 265:23 questions if this is a correct practice to begin with, and he says that certainly if there is a mourner or a yahrtzeit, the mohel should not have priority over them to lead the services. However, it is clear from the Shach that the prevailing custom was indeed that the mohel does have priority over the mourners to lead services, and yahrtzeit would probably be the same halacha as a mourner.

There is also a custom that on the Shabbos before a yahrtzeit, one should receive the maftir aliyah, [54]However, some insist that he should not receive maftir, but rather one of the seven main aliyos, see the second opinion in the Penei Baruch 39:12. lead the services for Musaf, as well as the Maariv service immediately following Shabbos. [55]Gesher Hachaim, volume 1, 32:2 Others have the custom that one leads all of the payer services on the Shabbos before a yahrtzeit. [56]Penei Baruch 39:2 Also, the yahrtzeit is entitled to an aliyah on the Torah reading day which coincides, or precedes his yahrtzeit, and he should recite a Kel Malei prayer for the soul of his relative at the time of his aliyah. [57]Gesher Hachaim, volume 1, 32:2 However, the prevalent custom is to recite the Kel Malei prayer on the Shabbos before the yahrtzeit, or earlier if necessary. [58]Kol Bo Al Aveilus, 5:4:21

Some have the practice to recite kaddish and lead services for their grandparents once their parents are no longer able to do so; however, they are not entitled to do so if that means that they will take these privileges away from other mourners present. [59]Matte Efraim, dinei kaddish yasom, shaar 3, seif 14; Penei Baruch 39:8; and Nitei Gavriel, volume 2, 70:12

As always, customs vary and you should ask your rabbi questions about appropriate practice.

David Roth is a semicha student at RIETS and a summer intern at Torah Musings.