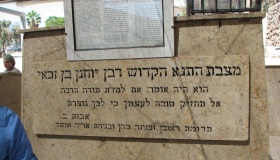 The destruction of the Second Beis Hamikdash was a devastating catastrophe for the Jewish people. The Gemara (Bava Basra 60b) records the sense of lethargy and depression that set in – Jews were so demoralised, they did not see any reason to continue Judaism. Beyond the initial depression, the long term questions of the future of Jewish identity and observance loomed large. What does Jewish life look like in a post Beis Hamikdash world? The Beis Hamikdash had been the centre of religious life for centuries. The Jewish calendar featured the pilgrimages of Aliya LaRegel. The agricultural cycle involved bringing the first fruits, the Bikkurim, to Yerushalayim. At many important moments in one`s life, such as the birth of a child, and salvation from a potential danger, one would bring a sacrifice. The absence of the Beis Hamikdash meant there had to be a paradigm shift in Jewish observance and identity.

The leader who charted a course forward at this point was Rabbi Yochanan Ben Zakai. He interacted directly with the Roman authorities, such as when he famously made three requests from the Roman leader outside Yerushalayim (Gittin 56a). However, it is in his Takkanos, enactments, that he made at this time, that we can see the direction he set for Jewry.

The Gemara in Rosh Hashana records that he made eight Takkanos after the destruction of the Beis Hamikdash (a ninth was made at an unspecified time). These rulings spanned a broad range of areas, such as the rules of conversion, the setting of the calendar and the agricultural cycle. However, the enactments were not haphazard, but rather represent three different elements of the reaction to the destruction.

A second group of enactments were made, not to remember what was, but to adapt to the new reality. Rabbi Yochanan Ben Zakai made five rules, each of which are based on the fact that the situation on the ground has changed. (Many of these rules are quite technical, so I will attempt to simplify them)

The destruction of the Beis Hamikdash had changed many things about Jewish life. Rabbi Yochanan Ben Zakai adapted those practices that had to reflect the new reality.

The eighth enactment is the most astonishing. (Once again, this rule is quite technical, but the explanation below, which is the crux of the idea, can be understood without understanding the full rule.) When the Beis Hamikdash was in existence, the new produce of a field could only be eaten after the Omer sacrifice was brought on the second day of Pesach. In the absence of the sacrifice, the new produce can be eaten from daybreak of the second day of Pesach, a number of hours earlier than it could be eaten when the Beis Hamikdash existed. Rabbi Yochanan Ben Zakai removed this permission to eat produce earlier than during the time of the Beis Hamikdash. He stated his rationale –“Next year the Beis Hamikdash will be rebuilt, will people not say “Last year we ate at daybreak?””

Not content to remember the past, and change in the present, Rabbi Yochanan Ben Zakai looked to the future. As everything around him crumbled, on the back of the worst calamity and depression the Jews had faced, he also looked towards a better future.

In Our Days, As Then

Since that event, one of the few equivalent catastrophes that has happened to the Jewish people is the Holocaust. The centre of Jewish life for the previous three hundred years was destroyed in less than a decade. Millions were killed, millions were refugees who had to rebuild their lives from nothing. As with the destruction of the Beis Hamikdash, beyond the short term mourning and desperation, there was also the more long term question of how to rebuild Jewish life.

One can find within Orthodoxy today all three elements of the reaction of Rabbi Yochanan Ben Zakai. There has been a move to ensure a continued connection to our past, a move to make the necessary changes in the present, and a move to look towards our future.

In many parts of Orthodoxy, there has been a pronounced effort to maintain a connection with our past. Many students today learn in yeshivos named Mir, Ponevezh and Grodno, named after the famed yeshivos of pre-war Europe. The great rabbis of pre-war Europe, such as Rav Elchonon Wasserman, the Chofetz Chaim, Rav Yerucham Lebowitz, Rav Chaim Ozer Grodzinski, loom large over the discourse of much of Orthodoxy. The wearing of hat, jacket, streimel and Kappote have been maintained, despite the demise of the cultures that gave rise to them. Sometimes, the Holocaust is consciously or subconsciously repressed in an attempt to maintain a feeling of connection, not a break, with pre-war Europe. In many ways, the great past of European Jewry has been maintained and perpetuated within Orthodoxy.

There has also been a movement within Orthodoxy to adapt to the new situation. In many parts of Orthodoxy, the Land of Israel and the Jewish people have been consciously introduced into discourse as these topics became more central in our current situation. Yeshivos have been established in Israel where students serve in the Israeli army, with names like Sderot, Petach Tikva, HaKotel, Mitzpe Ramon. In the Diaspora, yeshivos have been established that allow students to learn in yeshiva whilst earning a degree or a vocational qualification. Changes in women`s education and the increase in the study of Tanach are further examples of the changes that Orthodoxy has made as it adapts to its new environment.

There has also been a movement in Orthodoxy which is future oriented. Just three years after the Holocaust, Jews had fulfilled that hope of two thousand years – to live as a people in their land. Now was not a time to merely respond to society, but to build one. Jews threw themselves into professional and academic occupations, not merely as a way of adapting to a foreign society, but as a way to build one of their own. Jewish perspectives on society have been formulated, the fields of Mishpat Ivri and Jewish political theory have been developed, aiming to build the Jewish State in a Jewish way. In the Diaspora, Jewish perspectives have been formulated in more universalistic terms, also aiming to be proactive in building of wider society.

Three Sides Of The Same Coin

One could put names on these sectors – The first is largely Charedi, the middle National Religious and the third Modern Orthodox. However, what this framework can do is break down the barrier we generally erect between these three. All the above elements of Orthodoxy are not yet working in tandem, but they are all reading from the same script. Just as Rabbi Yochanan Ben Zakai two thousand years ago, Orthodoxy has seen catastrophe and responded in a similar way. It has maintained a connection to the past, adapted to its new situation and has continued, even after facing a great catastrophe, to look towards the future.

Aron White is a fourth year student at Yeshivat HaKotel.