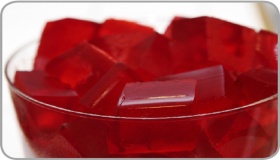 For many years, gelatin–which is typically derived from non-kosher sources–has posed a potential problem for kosher consumers and has been a major subject of debate among halachic authorities. However, recent developments in gelatin production might cause a problem even for those who have been historically lenient.

Gelatin is defined as 1. a nearly transparent, faintly yellow, odorless, and almost tasteless glutinous substance obtained by boiling in water the ligaments, bones, skin, etc., of animals, and forming the basis of jellies, glues, and the like. 2. any of various similar substances, [such] as vegetable gelatin. [1]http://dictionary.reference.com/browse/gelatin?s=t Vegetable gelatin has few if any kashrus concerns but gelatin derived from animals has generated vibrant discussion.

Although according to the above definition gelatin can be made from ligaments, bones, skin, etc., of animals, the discussions of halachic authorities appear to be exclusively regarding the bones. If the gelatin comes from a kosher animal that has been slaughtered properly, it is kosher and pareve [2]Igros Moshe YD 1:37 and Igros Moshe YD 2:27, based on Noda B’Yehuda, Volume 1, YD 26, because something that is completely dry does not have enough taste to make a forbidden meat and milk … Continue reading according to everyone. Today, a major source of kosher gelatin is the bones of kosher fish.

The Gemara [3]Chullin 114a says that one who cooks bones with milk is exempt from punishment because the bones do not have the status of meat on a Biblical level, which is codified in Shulchan Aruch. [4]YD 87:7. See also in Mishnas Rebbi Aharon YD 16,2, where he is unsure if the prohibition is really only Rabbinic, as we had suggested, or if it is indeed Biblical in nature, but one who does so is … Continue reading The Gemara further states that if a non-kosher piece of boned meat falls into an otherwise kosher mixture, the bone counts as part of the kosher meat to nullify the non-kosher meat, [5]YD 99:1 or at the very least do not count towards the forbidden part. [6]First opinion in Rama there.

Although in general the bones are still rabbinically prohibited, in the case of gelatin there may be even more room for leniency because the bones are completely unfit for human consumption. They were never included in the prohibition of eating a non-kosher animal in the first place. This is similar to a case described by the Rama, [7]YD 87:10 who permits putting milk into an animal’s stomach which is completely dry like wood, since it is no longer considered meat. The Shach [8]There 33 writes that the same applies to any innards of an animal, such as bones. [9]The Shach has one caveat, however, which is that he says that one should not l’chatchila (initially, in the first place) make such a mixture; however, the Pischei Teshuva (there 19) quotes R. … Continue reading

Based on the above, R. Chaim Ozer Grodzinski [10]Achiezer 3:33:5 permits the use of gelatin from a non-kosher animal. An additional consideration of his is that the processing of the gelatin makes the bones inedible for even the consumption by a dog. Therefore, the bones, even when reconstituted in the form of gelatin, are considered “changed” (nishtanu) in the process and unconnected to the original non-kosher product. He also noted that gelatin is almost always used in a way that it is nullified by sixty (i.e., it is less than one sixtieth) in the finished product. [11]He explains that there is no problem of ein mevatlin issur l’chatchila (nullifying a prohibited item in the first place) in this case based on a responsum of R. Akiva Eiger (207). R. Eiger … Continue reading This is also the position of R. Ovadia Yosef [12]Yabia Omer YD 8:11 and can be inferred from the responsa of R. David Tzvi Hoffman. [13]Melamed l’hoil YD 2:24 R. Yechezkel Abramsky [14]The responsum is printed in the introduction to Volume 4 of Tzitz Eliezer. Note that R. Abramsky rejects the logic to permit gelatin based on nishtanu (that it is changed), and permits it only … Continue reading also proposed this approach but cautioned against leniency, out of fear that permitting something which had previously been assumed to be prohibited will lead to people being lax about the halachic process in general. [15]Whenever a Halachic authority mentions something like this, one would need to determine whether the conditions under which he made such a statement would still apply, and whether if he were alive … Continue reading

However, R. Aharon Kotler [16]Mishnas Rebbi Aharon, YD 16-17 argues that the reason that bones are not included in the prohibition of eating non-kosher animals is simply because they are unfit for human consumption. However, if they are reconstituted into gelatin, they are fit to eat and the prohibition returns. This is because he holds that when the prohibited item itself is reconstituted, as opposed to just being mixed up with other things to make it possible to eat the bones, the bones themselves will become like the meat. If so, at the very least there is a problem of achshvei (showing that this item has importance), which renders the item rabbinically prohibited. [17]Achshvei is when one eats something which is not fit for human consumption; on a Biblical level, there is no prohibition whatsoever but rabbinically there is a prohibition to eat this item because … Continue reading This is also the position of R. Moshe Feinstein. [18]Igros Moshe YD 2:27, in the last paragraph. R. Moshe Feinstein writes that gelatin from a non-kosher animal is forbidden because the Rambam ruled that bones are forbidden even though there is no … Continue reading R. Yitzchok Yaakov Weiss [19]Minchas Yitzchak 5:5 likewise writes that gelatin from bones of non-kosher animals has been determined to be forbidden by most Halachic authorities (al pi daas rov minyan u’binyan shel gedolei ha’torah). R. Yosef Eliyahu Henkin, while admitting that there is room to be lenient if the bones are completely dry, questions whether gelatin is actually made from completely dry bones. He then says that one should act stringently anyway since such gelatin is available, and we should try to support those making gelatin with more stringent standards. [20]Edus L’Yisrael, page 177

R. Tzvi Pesach Frank [21]Har Tzvi YD 83 takes an interesting middle approach: he argues that the case of bones that are only rendered unfit from human consumption, but are still fit for a dog’s consumption, is a matter of debate. It is contingent on the halachic argument between the Noda b’Yehuda and the Shach about whether the above-mentioned Rama, who permits putting milk into an animal’s stomach that is completely dry like wood, also applies to the stomach of a non-kosher animal. Was the Rama only lenient about the prohibition of meat and milk or even about non-kosher animals? However, if the bones are rendered unfit even from the consumption by a dog, they should be permitted by all. He concludes that until we better determine the actual situation, one should be stringent, but one should not tell those who are lenient that they are acting incorrectly.

It is also important to realize that the production process today may not be the same as that dealt with in the decades-old responsa mentioned above. The Kosharot organization in Israel [22]Emunas Itecha, Volume 97, page 41 has made the claim that today most gelatin is made from fresh bones, in which case the leniency of dried bones would no longer apply. Therefore, the gelatin made from these fresh bones of non-kosher animals should be forbidden according to all halachic authorities.

R. Yaakov Ariel [23]Emunas Itecha, Volume 98, page 143 responded that even if it is true that gelatin is made from fresh animal bones, the second leniency still applies. In the process of making gelatin, the bones are rendered inedible to a dog. He concludes that it is proper to be strict on that matter, but objects to calling it non-kosher.

The Kosharot organization responded, [24]Emunas Itecha, Volume 99, page 152 agreeing with R. Ariel that if the gelatin was indeed made inedible to a dog in the process that it would indeed be kosher according to some halachic authorities. However, they deny that this is what actually happens in the process of extracting gelatin. [25]On http://www.toraland.org.il/media/273100/emunatTahapuhotZman.pdf, page 16 of the pdf, footnote 73, it is suggested that the argument over whether it is unfit for consumption of a dog might really … Continue reading Accordingly, even the lenient authorities would have to rule strictly if the facts as reported by Kosharot are confirmed.

The OU and most mainstream kashrus organizations in America are stringent like R. Aharon Kotler and R. Moshe Feinstein; they only certify gelatin that is made from the bones of kosher fish, or from kosher animals which have been slaughtered properly. [26]See http://oukosher.org/blog/industrial-kosher/the-fascinating-story-of-kosher-gelatin-or-how-a-product-from-beef-can-be-used-in-dairy-delicacies/, see also … Continue reading I have found conflicting sources regarding the policies of the Rabbanut in Israel. [27]According to RJJ Journal of Halacha and Contemporary Society, Volume 30, page 66, footnote 1, the Rabbanut follows the lenient position. However, according to an article on the Kosharot website … Continue reading

David Roth is a semicha student at RIETS and a summer intern at Torah Musings.