Is There A Bracha On The Mona Lisa? 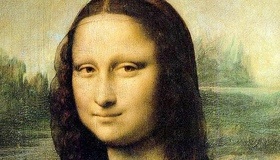 Is There A Bracha On The Mona Lisa? Reciting Blessings On Pleasures Other Than Food and Drink

The Talmud [1]Brachos 35a states that one is forbidden to enjoy the pleasures of this world without first reciting a bracha (blessing) to thank G-d. But not all pleasures are equal. Drinking fine wine requires a blessing but does appreciating art, enjoying a nice breeze or other common pleasures? The reasons behind the brachos teach us an important lesson about appreciation and making distinctions.

I. Blessings on Pleasures

The Talmud compares one who partakes without first reciting a bracha to a person who has committed me’ila, the illicit use of sacred objects (belonging to the Beis HaMikdash) for personal benefit. Additionally, it points out that the texts in Tehillim ostensibly seem to contradict each other, at one time stating “the earth is the L-rd’s and the fullness thereof” [2]Tehillim 24:1 and subsequently stating “the heavens are to G-d and earth He has given to mankind,” [3]Tehillim 115:16 allowing for confusion as to whether the earth belongs to G-d or man. The Talmud resolves this seeming contradiction by explaining that prior to reciting a bracha the earth is viewed as belonging to G-d, but once a person has recited a bracha then the world has been given for human enjoyment.

Not all blessings address pleasure. The Mishna also discusses brachos regarding natural phenomena, such as on seeing great mountains or seas. [4]Brachos 54a These brachos are not on experiencing a pleasure but as praise and acknowledgement of the Divine creation. [5]That these are not for “pleasure” is clearly seen in the fact that these brachos include cases of lightning, major storms and earthquakes, each potentially quite dangerous but clearly showing the … Continue reading The most noticeable difference between these types of brachos is that those on pleasures are always said before partaking of that pleasure, while a bracha in praise or acknowledgement is recited following the experience. [6]Birkas HaMazon and the other brachos recited after eating are also in the category of praise and acknowledgement and are not viewed strictly as brachos on pleasures.

Several Rishonim wondered about the parameters of this rule of not benefiting from worldly pleasures without a bracha. For example, they ask why the bracha of borei me’orei ha’eish is only recited following Shabbos and Yom Kippur as a part of Havdalah, and not recited each day as we see and benefit from the light of a fire. Quoting Rabbeinu Yosef, Tosafos [7]Pesachim 53b and the Mordechai [8]Brachos 189 answer that these brachos are only recited for pleasures which “the body enjoys”; the benefit enjoyed from light does not meet that criteria. [9]This is also quoted by the Beis Yosef (298 sv u’mevarech). It should be noted that the Sefer HaMichtam (Pesachim 106a) specifically rejects this approach, writing that even the bracha of borei … Continue reading Similarly, they point out that the recitation of “Yotzer Or” each morning is not a bracha said on enjoying or benefiting from light but more a matter of praise and acknowledgement of the nature of G-d’s creation of light.

Taking a slightly different approach (or perhaps just adding clarity to Tosafos), the Ritva [10]Pesachim 54a wrote that “we do not find brachos on enjoyment of pleasures that are outside of the body, only on something which the body benefits from.” The Ran [11]Chidushei HaRan, Pesachim 53b elaborated on this idea, pointing out that one who enjoys bathing in hot or cold water or enjoys the comfort of a pleasant (cooling) breeze does not recite a bracha, and all the more so for pleasures that do not touch the body at all. It would seem that this approach understands the idea of “bodily pleasure” as being a pleasure that actually enters the body, clearly precluding the light of a fire that, beneficial as it is, remains external at all times.

Quoting the idea from Tosafos and the Mordechai, Rav Moshe Isserles [12]Darchei Moshe, OC 216 extended it further. He used this reasoning to explain why we do not say a bracha on pleasant sounds such as music. As much as fine music may delight, this joy cannot be viewed as a bodily pleasure in this regard.

Aside from the above explanation, the Magen Avraham [13]OC 216:1 (followed by the Mishna Brura [14]OC 216:4 ) quotes the Matte Moshe who writes that unlike fragrant aromas, a bracha is not recited on sounds/music since there is no “substance” (mamash) to the pleasure. He also adds that there is no bracha on the pleasure gained from water (a cool swim on a hot day, Jacuzzi, hot tub, etc) or anointing oils and creams because they do not enter the body. [15]On the surface this seems to be against the words of Rashi (Yoma 76b sv dumya) who writes: “Just like oil which is applied externally and is absorbed into the body, so too water is absorbed … Continue reading

A potentially troubling source is the list of forbidden pleasures of Yom Kippur, which includes washing and anointing but omits smelling pleasant aromas, which is permitted. Accordingly, there would seem to be strong cause to mandate recitation of a bracha on experiences of pleasurable washing and anointing, perhaps even more so than for aromas.

This position is made even stronger by the fact that when the Talmud [16]Yoma 76b explained the sources of these prohibitions on Yom Kippur, it equated anointing to drinking. However, Rabbeinu Tam [17]Quoted in Tosafos Yeshanim, Yoma 76b pointed out that this comparison of anointing to drinking is unique to Yom Kippur and does not apply in other areas of Halacha. For this reason, he explained, it is permitted to rub oils from chelev (forbidden fats sometimes used in creams and soaps) on oneself even though the Torah has forbidden their consumption. In that case as well, anointing is not equivalent to drinking.

This approach of Rabbeinu Tam is important beyond the law pertaining to applying oils and creams. Following this approach, it would be appropriate to suggest that each area of Halacha has its own parameters and threshold in terms of when a particular act is deemed to be a significant act of enjoyment or benefit. There would then be no room to ask why aromas are viewed as halachically significant in regard to requiring a bracha before enjoying them but as insignificant in regard to Yom Kippur.

Even if this point is accepted–that we should not compare standards in one area of Halacha to another–that cannot be said in the case of brachos. The Talmud itself did precisely that, stating that eating without the recitation of a bracha is similar to committing me’ila. In several places the Talmud [18]Pesachim 26a, Krisus 6a ruled that “sounds, appearances and aromas are not subject to the prohibition of me’ila”. Ostensibly this would mean that each of these three is not considered to be a halachically meaningful benefit so that even if a person would have such a pleasure without reciting a bracha he has not violated the prohibition of me’ila. Yet, brachos are required for them. More importantly to our point, it is clear that these three pleasures are linked, so that if a bracha is required for aromas it should also be so for beautiful sights and sounds.

Rav Yechezel Landau [19]Tzlach to Brachos 43b focused on the original statement of the Talmud that one is prohibited to enjoy the pleasures of this word without a bracha and that doing so is the equivalent of me’ila. He was troubled by the seeming inconsistency that based on the abovementioned sources that me’ila does not apply to the pleasures of sound, sight and aroma, yet the Sages established brachos for aromas. This, he explains, is what compelled the Talmud [20]Brachos 43b to provide an independent source for the requirement of a bracha on aromas based on the verse of “let all souls praise G-d”.

In a somewhat similar vein, Rav Ovadia Yosef [21]Responsa Yabia Omer (vol 4, OC 8:17) wrote that aromas are different than sights and sounds. While there is a small physical pleasure below the threshold of me’ila), there is also a pleasure of the soul. Together, these pleasures rise to the threshold of necessitating a bracha, something which does not apply to sights or sounds that lack the soul pleasure.

The Radvaz [22]Responsa Radvaz (vol 1 #297) took a far simpler approach to this dilemma. Writing that the threshold to require a bracha is far lower than that of me’ila, he differentiated between the two. In order to violate me’ila there must be “substance” (mamash) to the pleasure. However, for a bracha all that is required is enjoyment. [23]It should be noted that the Radvaz has a somewhat different understanding of the idea that me’ila does not apply to sounds, sights and aromas. He writes that this is only true if the aroma or sound … Continue reading Following this logic he indicates that in fact one is obligated to recite a bracha not only on pleasant aromas, but also on beautiful sights and sounds. [24]This seems to be the understanding of the Sefer HaMichtam (above in footnote #8) as well, who wrote that the bracha of borei meorei ha’eish is also a bracha on the pleasure. While they do seem to … Continue reading

An alternative understanding might be to distinguish between pleasures/pleasurable experiences that are fundamentally the work of G-d and those that tend to be man-made. This seems to be borne out by the language of most of the brachos recited on foods and aromas, which focus on the “borei” (the Creator). [25]The texts of HaMotzi and Shehakol while lacking this word “borei” clearly focus on G-d as the provider. While there are certainly special sights and sounds that are the handiwork of G-d, many of them are not. A beautiful human voice or the singing of a bird are the work of G-d but instrumental music is not. So too with sights, where so much great art, architecture, jewelry, and the like are products of human creativity. The same can be said for the pleasure gained from water or oils–while these substances are clearly the handiwork of G-d, it is not their substance per se that generally brings the pleasure, but the experience of the hot tub, Jacuzzi or rubbing on of the oils.

If this is correct, then it is clear that it is necessary to recite a bracha to give thanks only for foods, beverages and aromas that generally are already products of the Creator [26]While most fragrances are from plants, flowers or even animals (musk), there are some that are synthetically produced from chemicals. This is less true with foods, commonly only seen in the realm of … Continue reading and not products or experiences that commonly (in the case of sounds and sights) or overwhelmingly (in the case of the pleasures of water or oils/creams) are the result of human creativity and efforts.

Regardless of which explanation may strike a chord, aside from the minority opinion of the Radvaz, there is no bracha to be recited prior to having the pleasure of seeing great artworks or landscapes. However, if upon seeing these mountains, seas and other natural sights one is moved to acknowledge the Creator, one recites, as established by the Sages, the bracha of Osei Ma’aseh Bereishis.