Yom HaAtzmaut as a Lasting Holiday

Posted by: Eliezer Melamed in Posts May 6, 14 4 Comments 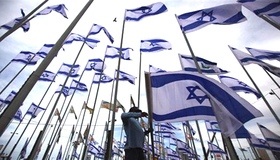 Excerpted with permission from the official English translation of Peninei Halakha, Zemanim 4:3-5.

On Yom HaAtzmaut (Israeli Independence Day), the Jewish people were delivered from bondage to freedom – from subjugation to the kingdoms of the world, to political independence. This also brought about an actual resurrection from death to life. Until then, we were unable to defend ourselves against the enemies who pursued us. From that day on, thanks to God’s kindness, we began to defend ourselves and win our battles. True, all the enemies who rise up to destroy us have yet to be destroyed, but after the establishment of the State of Israel, we formed an army, thank God, and we have the strength to fight back and triumph. And even though more than 20,000 holy souls have been killed in wars and terror attacks since the State came into being over sixty years ago, just a few years beforehand, during the horrific Holocaust, more than six million holy Jews were killed in the span of five years – more than three hundred times the amount. This is the difference between having the ability to fight back and being a helpless victim.

That day brought about a salvation for Diaspora Jews, as well. They now have a country that is always willing to absorb them, and even works on their behalf in the international arena. Before the State was established, almost no one paid attention to our complaints against the murderous, anti-Semitic persecutions that raged in many countries. After Israel gained independence, however, even the most evil regimes were forced to take into consideration Israel’s possible reprisals on behalf of the Jews living in their midst. Even Communist Russia had to relent and allow the Jews to leave from behind the Iron Curtain, something that was unfathomable before the State was born.

The establishment of the State also brought spiritual salvation to the Jews. Previous to this, the Jewish nation underwent a profound spiritual crisis since the dawn of the modern era. The opportunity to integrate into the civil and national frameworks of the developed nations, which the Jews were granted, generated a strong desire to assimilate. This is not the place to elaborate on the reasons for this crisis; our master, Rav Kook, zt”l, deals with the issue at length, discussing its various facets. In brief, a dangerous process of assimilation and the abandonment of Judaism developed in all countries that embraced modernization. This process threatened the very existence of the Jewish communities in the Diaspora. Assimilation began approximately two hundred years ago in Western Europe, spreading gradually to Eastern Europe and the capitals of the more developed Arab countries. Today, most young people in the Jewish community of America marry out of the faith, and even those who marry Jews beget very few offspring. Under these circumstances, Diaspora Jewry is fading away. Only in the State of Israel is the Jewish population growing; and intermarriage is relatively rare. Moreover, the percentage of Jews connected to Torah and mitzvot in Israel is higher than that of any other Jewish community in the world. This spiritual salvation came about in the merit of the establishment of Medinat Yisrael, which enabled the ingathering of the exiles and diminished the temptations of assimilation.

Thus, Yom HaAtzmaut is invested with three sanctities: the mitzvah of settling the Land, the beginning of redemption which created a Kiddush Hashem in the eyes of the nations, and the various salvations that the Jewish people merited with the rebirth of sovereign nationhood in our Land.

A verse in Shir HaShirim says, I made you swear, O daughters of Jerusalem, by the gazelles or by the hinds of the field, that you not awaken nor arouse the love until it desires(Shir HaShirim, 2:7). The Sages explain that God administered three oaths when Israel went into exile amongst the nations: two to Israel, and one to the Gentiles. He adjured Israel not to ascend “as a wall” (some versions read, “against the wall”) and not to rebel against the nations; while He adjured the Gentiles not to overly subjugate the Jews (Ketuvot 111a). Afterwards, the Gemara adds three other oaths that Hashem administered to the Jews: “That they will not reveal the End [of Days], delay the End, or reveal the secret to the Gentiles.” Furthermore, “Rabbi Elazar says, The Holy One, Blessed Be He, said to Israel: ‘If you fulfill the oath, fine; but if not, I will allow your flesh [to be devoured] like that of the gazelles and the hinds of the field.’” (there).

One of the Rishonim, Rabbi Yitzchak De Leon, author of Megillat Esther [on the Rambam’s Sefer HaMitzvot], understands the oaths to mean that “we may not rebel against the nations and conquer the Land forcibly,” and this is the intention of “not to ascend as a wall.” Based on this, he concludes that there is no mitzvah to settle the Land until Mashiach arrives (Gloss on the Ramban’s Addendum to Sefer HaMitzvot, Positive Commandment 4).

Many interpretations have been given for the three oaths. Several of them imply that we must not precipitate the End [of the exile] and ascend to the Land forcibly, without first considering the matter realistically. For there is reason to fear that, because of the hardships of exile and the protracted anticipation for redemption, people will ascend to the Land impetuously, without any practical means by which to build the Land and stand up against the nations of the world. This will lead to destruction and crisis instead of the beginning of redemption. Therefore, God made us swear that we will not attempt to return before carefully calculating our actions. Rather, we should ascend and build the Land gradually, in coordination with the nations of the world, or by way of manifest miracles, which comes to pass if we deserve the “I [God] will hasten it” form of redemption (Yeshayah, 60:22).

Indeed, the modern return to Zion occurred gradually. The Jewish community in the Land established itself step by step, while the Zionist Organization simultaneously engaged in international diplomatic efforts, until the nations recognized the Jewish people’s right to return to their Land and build there a national home. Accordingly, after the League of Nations agreed in San Remo to return the Land of Israel to the Jewish people, Rabbi Meir Simcha of Dvinsk, zt”l, wrote that “the fear of the oaths has faded away.” [1]The [full] quote can be found in HaTekufah HaGedolah, p. 175. We will mention a few of the sources. Rashi explains [the Gemara’s statement] “They shall not go up as a wall” [to mean], … Continue reading

There is a mitzvah to establish a holiday, to rejoice and praise God, on a day when Jews were delivered from distress. This is what prompted the Rabbis to establish Purim and Chanukah as everlasting holidays. Even though it is forbidden to add mitzvot to the Torah, this mitzvah is an exception, for it is derived from a logical inference (a kal va’chomer): when we left Egypt and were delivered from slavery to freedom, God commanded us to celebrate Pesach and sing praise to Him every year; all the more so [must we celebrate] Purim, when we were saved from death to life (Megillah 14a). This is what the Rabbis relied on when establishing Chanukah as well (Ritva, ibid.). The Chatam Sofer explains (Yoreh Deah end of 233, Orach Chaim 208) that since this mitzvah is derived from a kal va’chomer, it is considered a biblical commandment. However, the Torah does not prescribe exactly how to make a holiday; therefore, one who does anything to commemorate these great salvations fulfills his biblical obligation. It was the Rabbis who determined that we read the Megillah, prepare a festive meal, send portions of food to others, and give charity to the poor on Purim, and light the candles on Chanukah.

Many Jewish communities throughout the ages kept this mitzvah of instituting days of joy in commemoration of miracles that happened to them. Many of them used the name Purim in reference to these days, like “Frankfort Purim” and “Tiberias Purim.” Some communities had a custom to eat festive meals, send portions of food to one another, and give alms to the poor on these days. Maharam Alshakar (49) writes that the enactments made by these communities have binding force, obligating all of their descendants to keep them, even if they move to a new community. Other Acharonim concur (Magen Avraham and Eliyah Rabbah 686:5). [2]The Pri Chadash (Orach Chaim 496, Kuntras HaMinhagim 14) disagrees with Maharam Alshakar, writing that we should not establish new holidays after the destruction of the Temple, when the Rabbis … Continue reading

The great gaon, Rabbi Meshulam Roth (Rata), writes: “There is no doubt that we are commanded to rejoice, establish a holiday, and say Hallel on [the fifth of Iyar], the day which the government, the members of the Knesset (who were chosen by the majority of the people), and most of the greatest rabbis, fixed as the day on which to celebrate, throughout the Land, the miracle of our salvation and freedom” (Responsa Kol Mevaser 1:21). [3]In his Responsa Kol Mevaser (vol. 1, 21:2-3), the brilliant Rabbi Meshulam Roth (about whom our master HaRav Tzvi Yehudah HaKohen Kook said that he was the gadol ha’dor after the passing of … Continue reading
———