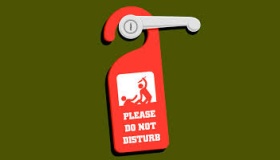 Sometimes lying is allowed, even in such mundane ways as how we answer the phone. Clearly, lying should be avoided whenever possible. The Torah emphasizes: “Mi-dvar sheker tirchak, Keep far from a false matter” (Ex. 23:7). Truth is a prime value in Judaism, described as God’s signature (Shabbos 55a).

Yet, other values sometimes take precedence. Peace famously overrides truth. Hillel ruled that you may praise a bride as beautiful even if she really is not (Kesubos 16b). Another value that apparently takes precedence over truth is privacy.

In a startling ruling, R. Yitzchak Fuchs (Halikhos Bein Adam Le-Chaveiro, p. 374) quotes R. Shlomo Zalman Auerbach and R. Shalom Yosef Elyashiv as permitting you to say that you are not there if you cannot take a visitor or telephone call. Of course, you should preferably tell them the truth, that you are busy. However, if this will anger or offend them, you may lie or have someone else lie for you.

Rav Auerbach added that this permits you to leave a voice mail message saying that you cannot answer the phone. Really, you might be able to answer but choose not to for whatever reason. However, you are not required to divulge that information so you may simply say that you cannot answer (ibid., n. 51). Rav Auerbach also quoted R. David Tzvi Hoffmann as instructing his wife to tell people who asked for him during his nap that he cannot be disturbed because he is preparing his lecture. Presumably this was during his later years, when he was a weak, old man. That sleep afforded him the strength to teach and therefore could be considered preparation (ibid., n. 52).

Ostensibly, this is an example of peace overriding truth, for which we have a Talmudic example. However, there is more to this equation. These great sages added that you are not obligated to interrupt your activity, whatever it may be, to greet visitors or engage in their business. Additionally, you are not required to divulge your reasons. Just because someone calls you or knocks on your door, you do not lose your right to privacy. Therefore, as a last resort, you may lie to get rid of them.

However, this permission has limits. First, you may not do so in front of children. They are impressionable and may see this as a primary response rather than a last resort (ibid.). Additionally, you may not do this regularly. Even when lying is permitted, you may not become a liar. The prophet denounces those who “have taught their tongue to speak lies” (Jer. 9:4), implying a regularity that in itself forbids non-truths, even if otherwise acceptable.

Yet I find this permission bewildering. Is it really so hard to simply say that you are “unavailable”? This is a catch-all term that is vague but accurate. Why lie when you can firmly but pleasantly assert the truth? Perhaps there is no such word in Hebrew (or German, for Rav Hoffmann). Personally, I prefer vague truth over polite lie. I suspect these sages would agree and were speaking about circumstances in which this is impossible.

I am likewise puzzled by the permission to maintain an occasionally false voice mail message. Why say that you cannot answer the phone when you can simply identify the home and ask the caller to leave his information? “Hello, you have reached the Schwartz’s. Please leave your name, number and reason for calling after the tone. Thank you.” Why be imprecise and possibly incorrect?