Shimshon and the Gates of Chevron 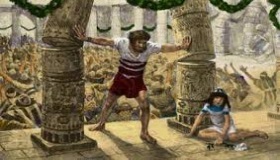 Shimshon and the Gates of Chevron

I. Perspectives and Parshanut

A student once asked me whether there was really anything new to write about Tanakh, given all of the great minds that devoted so much time to it over so many years. Yet in spite of the question’s logic, anyone who reads contemporary Parshanut knows that there always seems to be more room for truly exciting new insights and observations about the Jewish people’s “Book of Books.”

At the same time, I can understand people who can’t imagine that the Sages would have missed so many of the insights that have come out in recent years. There are actually many answers to this, but one answer is that some of these insights were so obvious to them that they felt that there was no reason to write about them. [1]See R. Y. S. Reggio in the introduction to his Biur Yashar who takes up such an explanation. In my mind, one observation that may have been obvious to the Sages and yet continues to be ignored by most contemporary writers is the centrality of Biblical figures’ tribal identities.

Since we have long lost any sense of belonging to a certain tribe and tend to think of ourselves as just Jews, it is understandable that we ignore the tribal motifs that figure prominently in Tanakh. Yet by doing so, we often miss the most central strands in important Biblical narratives. I will give one example in which I believe that an otherwise opaque narrative becomes extremely lucid and clear. That story is the rather disturbing one of the last formal shofet (judge) described in the book of Shofetim, Shimshon.

There are many things that set this story apart. For one, we are at a loss to understand why Shimshon is categorized as a shofet altogether. Loosely translated as “Judges,” the shofetim were ad hoc military and religious leaders, particularly known for their repulsions of Israel’s enemies from its land. In contrast, Shimshon’s efforts do not push the powerful Philistine enemy away. And if he is a leader at all, he is ironically one without followers, for whereas the other shofetim lead their armies into battle, Shimshon leads only himself. No doubt, his actions cause the Philistines serious losses and brings them to tread more carefully in their policies towards the Jews. (A contrast between the cautious way in which they tried to entrap Shimshon at the end of the story and the brazen way in which he is captured at the beginning is a clear sign that this is the case.) Even so, this is in stark contrast to any of the other leaders that we read about in this book.

But there is something far more troubling. If not every single shofet was exemplary, neither is there anyone whose behavior is quite as murky as Shimshon’s. His life is marked by highly questionable liaisons with Philistine women, which serve as the catalyst to the struggle he takes on against the external enemy as well as against his own darker side. And in the end – as with his campaigns more generally – it is these same women that prove to be his undoing and ultimately for his own death-wish.

The narrative clearly draws our attention to fact this most manly of all Biblical figures is ultimately defeated by the “fairer sex.” And while there are other examples of Biblical women showing themselves ironically more powerful than their male adversaries, in the case of Shimshon it is not incidental but a powerful central theme.

In fact, the theme of men outdone by women begins even before he is born. His unusual birth is marked by an unnamed mother who “gets it” and a father, Manoach, who does not. Hence the angel announcing his birth first appears to his mother and not to his father. Showing the purposefulness of this choice, the narrative relates how Manoach is subsequently calmed by his wife when she explains that their vision will not result in their death. This pattern continues in his youth, wherein he is accompanied not only by his father but uncharacteristically by his mother as well. Nor is that the end of it. Paralleling his father’s experiences, Shimshon’s consorts ultimately always get the upper hand.

I believe that the key to all of this is to be found in Shimshon’s Danite identity, an identity meaningfully juxtaposed to that of Yehudah – both in this story and in the Chumash as well. We should remember that Yehudah and Dan are in charge of building the Mishkan, the essential structure of Jewish existence. That means that they encapsulate the Jewish people from head to toe. Accordingly, Yehudah leads the first of the four encampments while Dan leads the last. In this sense, they are both leaders of their respective groups, but whereas Yehudah is given the national leadership as well, Dan’s position is that of the national rearguard.

In the period of the Judges, Yehudah all but disappears. The leadership exhibited by their ancestor in Genesis and by the tribal leader Calev (and apparently Nachshon) on the way out of Egypt is not truly seen until it is revived by the House of David. During this period, the tribes have to fend for themselves and need to do their best until Yehudah decides that it is time to reassert itself.

That being the case, Shimshon’s main role may not be as a leader of the Jewish people. To the contrary, he is chosen as an anti-leader; as a parody of Jewish leadership when its natural source of leadership hides itself. Hence Shimshon is the last shofet because all of the other tribes have been given a chance and Dan is essentially all that is left. As such, he represents the bottom of the barrel. [2]He is the last of the official Judges, since we do not include Eli and Shmuel who are transition figures. Significantly then, Shimshon’s main function is to force the hand of Yehudah and start their eventual induction to reclaim the national leadership. Via Shimshon’s painfully awkward and highly limited leadership, he shows Yehudah what the Jews are stuck with unless and until Yehudah decides to live up to its natural role.

Thus it is no coincidence that Shimshon takes the gates of Gaza on his shoulders to Chevron, the capital city of Yehudah. It is from there that David would reign when he ruled only over Yehudah, before the rest of the tribes united behind him. And it is also no coincidence that this occurs after the men of Yehudah turn Shimshon in to the Philistine overlords who demand his capture. This act is a clear display of the extent to which the Jewish people’s men of valor have forsaken their role. In short, when Shimshon shows his own personal valor, one that should have been carried by Yehudah on a national level, he literally drives the contrast home, taking the message straight to the capital of the tribe of missing national leadership.

Through our focus on the roles of Dan and Yehudah in this story, we can also understand the unusual roles played by his father and mother. It seems likely that Manoach plays the same role on a micro level that the tribe of Yehudah plays on the macro level. [3]Even though Manoach is actually from Dan and tradition relates his wife as being from Yehudah (Bava Batra 91a), this may be one more flourish of a reversal within a reversal or simply showing that … Continue reading The traditional role of the mother, certainly in the Bible, is to follow her husband’s leadership (albeit with the power to critique and voice dissent) and to provide the rearguard of their family. In the case of Manoach, he literally follows his wife, [4]Shofetim 13:11. See Berachot 61a, which presents a figurative understanding alongside its more literal understanding. in the same way as Yehudah follows Dan in our story. Hence we see that the lack of natural national leadership is so far-reaching that it impacts all the way down to the very structure of Jewish home life.

Understood this way, from start to finish, the story of Shimshon shows how bad things had gotten during this period of Yehudah’s dormancy. Accordingly, it also sets the stage for the paradigm shift that would be required, such that the Jews could subsequently avoid the bizarre and serpentine maneuvers of Shimshon, eloquently foreshadowed so long before. [5]Bereshit 49:17.
———

2014-05-26
Francis Nataf
Previous: A World of Kindness
Next: Rav Soloveitchik at TED Talks