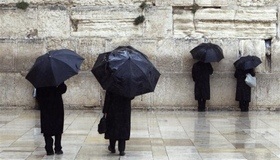 Posted by: Gil Student in From The Hashkafah Files, Magazine May 12, 14 1 Comment

Last week Israel experienced a downpour of rain. The timing is particularly interesting, perhaps marking the difference between a blessing and a curse, and raising an interesting example of decision-making in theology. Rain is good in the right time. At the wrong time, it destroys crops and ruins the year’s harvest.

Traditionally, the demarcation between good rain and bad rain is the month of Iyar. The Mishnah (Ta’anis 12b) states that rain that falls after Nissan is a sign of curse. Current practice stops the prayer for rain on Pesach, although one opinion is that it should continue until the end of the month of Nissan. But all agree that in Iyar we do not pray for rain.

This is what raises the issue with last week’s rain. Tuesday was the first day of Iyar. The rain fell on Wednesday and Thursday. Does this mean that the rain, which reportedly raised the Kinneret reservoir by two inches, was a sign of a curse?

It is certainly possible that something that seems like a blessing could end up being a curse. Indeed, many things in life that we think are good turn out to be bad. In Shemoneh Esreih, we refer to God as “Gomel chasadim tovim, the Bestower of good loving-kindness.” This phrase seems redundant since a chesed is by definition good. We use the same phrase in the last of the morning blessings, Birkhos Ha-Shachar, concluding: “gomel chasadim tovim le-amo Yisrael.” On this passage, the Eitz Yosef (in Otzar Ha-Tefillos, vol. 1 p. 65) explains that sometimes a chesed is good in the short term but ends up leading to trouble. Winning a cruise ticket may seem like a great reward but if the boat sinks, it is a disaster. I cannot envision a circumstance in which additional water in a reservoir is a bad thing, particularly in the Middle East, but my lack of imagination should not limit God’s ability. Additionally, if crops are ruined then we can readily see the bad side to the rain.

But perhaps we need not pursue that direction. R. Avigdor Lowinger (a distant cousin I’ve never met) discussed this issue last year in the journal Emunas Itecha (“Geshamim Le-Achar Chodesh Nissan” in Emunas Itekha, Tammuz 5773, issue 100 [now online here]). He points out that the two Talmudim disagree. According to the Talmud Bavli (Ta’anis, ad loc.), the blessing of rain continues until the end of the Hebrew month of Nissan. However, according to the Talmudi Yerushalmi (Ta’anis 1:8), the blessing and curse depend on the solar calendar as determined by the tekufah. Until the end of the month that begins with the tekufah, rain is a blessing. After that it is a curse.

One might think that this is a theological issue, not subject to the rules of decision-making. Whether rain is a blessing or not is a matter if divine truth, not rabbinic fiat. However, the issue affects practice: when do you fast during a drought and pray for rain? Therefore, it falls under the umbrella of the rules of decision-making. The Rif, Rosh and Rabbeinu Chananel follows the Talmud Bavli. The Rambam (Mishneh Torah, Hilkhos Ta’aniyos 3:9) rules according to the Talmud Yerushalmi, that Torah scholars only fast until the end of Nissan of the tekufah (30 days after the tekufah, see Mishnah Berurah 575:21). The Tur and Shulchan Arukh (Orach Chaim 575:7) follow the Rambam.

Therefore, the question is not whether the rain fell after Rosh Chodesh Iyar, which it did, but if it fell more than 30 days after the tekufah of Nissan. The answer is: yes and no. I asked R. Lowinger’s father, an expert in the Jewish calendar, when the dates for the tekufah of Nissan were this year. I claim no expertise on these complex calculations.

Another consideration is the rainfall during the rain season. The Yerushalmi (ibid.) adds that if rain fell during the proper season as a blessing, additional rain is a continuation of the blessing and not a curse. This year, rain was very light. It snowed in December and sprinkled lightly throughout the winter. Is that enough to be considered a rain so that last week’s downpour was a continuation? Was the flooding that accompanied the downpour a manifestation of the curse? That is beyond my decision-making ability.