Demographics, Terumah and Ingathering of the Exiles 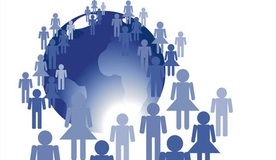 The status today of the terumah portion of produce allotted to kohanim, as well as other agricultural mitzvos, is a story of population growth as well as a perplexing Maimonidean statement. Most agricultural mitzvos today are of rabbinic nature. One wonders about the contemporary impact of the Talmudic statement (Sotah 14a) that Moshe was desperate to enter the land of Israel so he could fulfill all the land-based mitzvos. If Moshe would enter today, he would be unable to fulfill many of them on a biblical level! Yet that will change, and may already have, although it depends to some degree on your eschatological vision.

The Rambam (Mishneh Torah, Hilkhos Terumos 1:26) writes something that might seem innocuous at first but is actually startlingly wrong. He writes:

Terumah today, even in the places acquired by those who returned from Babylonia, even during Ezra’s time, is not biblical but rabbinic. For biblical terumah is only in Israel in a time when all Jews are there. As it says, “when you come,” [when you] all come like you did in the original conquest and as they will come in the future in the third conquest. Not like the second conquest, in Ezra’s time, in which only some [Jews] came and therefore the Torah does not obligate them [in terumah on a biblical level.] And so it seems to me is also the law regarding ma’aser, that today you are only obligated in it rabbinically.

This is difficult for two reasons. First, he bases his statement on a verse, yet that verse does not exist. Nowhere regarding terumah does the Torah say anything about entering the land. Second, the Talmud (Kesubos 25a) explicitly states that the condition of entering the land does not apply to terumah, as opposed to challah to which the condition applies. This Rambam contradicts the Torah and the Gemara! It is so wrong that it must be right. A scholar of his caliber does not make such basic errors. The resolutions offered to explain this passage are varied and have practical contemporary impact.

The Maharit (Responsa, vol. 1 no. 25) suggests that the Rambam quotes a verse regarding challah (Num. 15:18), although that verse says “be-vo’akhem” and not “ki savo’u,” as the Rambam quotes. R. Shaul Yisraeli (Eretz Chemdah, vol. 1 p. 80) quotes the Tzelach (Berakhos 26a) as explaining that the Rambam intentionally changed the language of the verse to teach that any phrasing of the word implies a requirement of all Jews to return. He also quotes the Netziv who suggests it is a copyists’ error.

Interestingly, the collection of textual variants in the back of the Frankel Rambam discusses the problem of the verse. Unlike the Netziv’s suggestion above, it points out that the verse exists in all manuscripts and printed editions, even in the Rambam’s responsa (Pe’er Ha-Dor 16). It also adds that many times the Rambam quotes verses incorrectly.

The Maharit argues that while the Gemara differentiates between terumah and challah, the Rambam follows the view of R. Yoshiyah in the Sifrei that equates the two. This debate over whether to equate the mitzvos can also be found in Menachos (67a). The Or Samei’ach (ad loc.) takes the same approach. According to them, the Rambam rules contrary to the Gemara because he sides with a conflicting text.

R. Chaim Soloveitchik explained this Rambam in two different ways. His father (Beis Ha-Levi, vol. 3 no. 1 ch. 4) quotes the answer he offered in his youth. According to the Rambam, challah is only rabbinic today for an essential reason while terumah is rabbinic for an ancillary reason. The Gemara differentiates between the two because it discussing on an essential level. On that level, terumah really should be a biblical obligation today. However, for a side reason it is not. Terumah requires dividing the land and allocating it to the different tribes, and that requires all of the people entering the land. Lacking the required population and the division of the land, terumah cannot be a biblical obligation.

In his posthumously published novellae on the Rambam (Chiddushei R’ Chaim Ha-Levi, Hilkhos Terumos 1:10; Hilkhos Shemitah 12:16), Rav Chaim adopts a different approach. He suggests that the Rambam derives the rule about terumah from shemitah and quotes that verse (Lev. 25:10). Just like shemitah requires a majority of Jews to enter the land, so too terumah and ma’aser. A key difference between challah on the one hand and terumah and shemitah on the other is when Jews leave the land. According to Rav Chaim, challah only needs all Jews to enter the land together at the time of conquest. Afterward, it is irrelevant how many Jews remain in the land. But terumah and other mitzvos require most Jews to be in the land, both at the time of conquest and beyond. Any time less than a majority remain in the land, the mitzvah loses its biblical force.

The Chazon Ish (Zera’im, Shevi’is 3:6; 21:5) explains that the Rambam learned terumah from challah, however only partially. The Gemara denies a full comparison but can still allow for a partial comparison. Challah is a biblical obligation as long as all Jews enter the land together at a time of conquest. The entering of the land is what generates the sanctity in the land that obligates in the mitzvah.

However, we know that is not true regarding terumah because the mitzvah was not observed during the years that Israel was conquered and divided. Therefore, the entering could not have generated the sanctity and the obligation. Rather, the people–with a king and prophet–generated that sanctity through their agreement. However, we learn from challah that we need a majority of Jews in the land for the mitzvah. Therefore, the Chazon Ish adds, even during the exile, if a majority of Jews dwell in the land there is a biblical obligation of terumah.

R. Isser Zalman Meltzer (Even Ha-Azel, Hilkhos Beis Ha-Bechirah 6:16), a leading student of R. Chaim Soloveitchik, quotes and disagrees with his esteemed mentor. He reaches a conclusion similar to that of the Chazon Ish.

According to the Chazon Ish and Rav Meltzer, if the majority of Jews in the world move to Israel then the mitzvah of terumah, among others, would regain biblical status. This will have practical impact in a number of ways, including cases of doubt. Wikipedia claims that there are 13.4 million Jews in the world, of which 6.1 million live in Israel, slightly less than half. However, the definition of a Jew is unclear. Between Russians and Ethiopians in Israel, many of whose halakhic status is questionable, and Reform patrilineal issues in America, the numbers of halakhic Jews is unknown. There may already be more than 50% of Jews in Israel.

According to Rav Chaim, the majority of Jews need to be part of the initial wave of immigration, the conquest. This raises an interesting theological question. The Rambam (above) mentions a third conquest, the first in the time of Yehoshua and the second in the time of Ezra. The establishment of the State of Israel is the third in history. If it occurred without the majority of Jews coming at one time, how will terumah (etc.) ever be a biblical obligation again? Does the Rambam, as explained by Rav Chaim, require an expulsion from Israel and then another return en masse? There are midrashim describing a terrible battle at the end of days in which the Jews are forced to flee. Is that what Rav Chaim would have in mind if he were alive today?

Perhaps the issue is what to consider a single conquest/return. Clearly the return does not need to be on the same day; that many people cannot arrive all on one boat or airplane. Maybe a wave of immigration can last a few years, maybe a decade. Is it possible that the non-stop immigration over the past hundred or so years counts as a single wave? In the end, our job is to learn Torah and observe mitzvos. When the time comes, we will understand exactly what is supposed to happen.