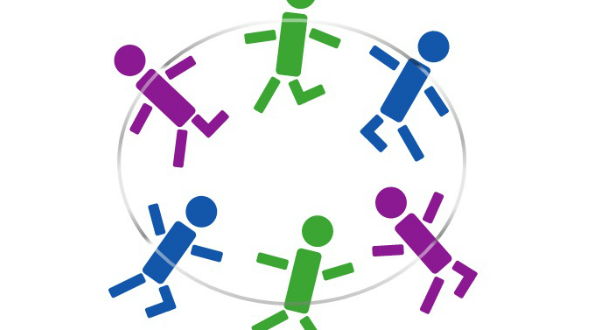 The Circle Dance in Jewish Thought

Posted by: Gil Student in From The Hashkafah Files, Magazine Apr 29, 14 3 Comments

The circle dance has become associated with Jewish culture, both Charedi and Israeli in different ways. What is more iconic than rabbis and celebrities dancing the “hora” on the Chabad Telethon? In the past, we have addressed the halakhic aspects of a circle dance that includes men and women together. [1]In this post: link. See also the lengthy discussion and many sources cited in R. Shmuel Katz, Kedoshim Tihyu, ch. 4. However, it also has interesting philosophical aspects.

I. Dancing in the Bible

The Torah reading for the seventh day of Pesach is often translated as saying that Miriam led the women in a song and dance. Just like it is unclear whether the women sang (link), it is also unclear whether they danced. The Torah (Ex. 15:20) says that the women went out with tupim and mecholos. Tupim are generally translated as drums. Mecholos, the plural of machol, is ambiguous. At times it means a musical instrument (Radak suggests a wind instrument like a chalil) and at times a dance.

Jewish Medieval commentators on this verse unanimously explain mecholos as an instrument, similar to tupim. Shadal even states that only Mendelssohn’s Bi’ur and Christians suggest the women danced. However, Shadal was wrong. The ancient Aramaic translations of Onkelos and Pseudo-Yonasan translate mecholos as dancing. R. Aryeh Kaplan, the recent traditional translator, followed Onkelos (The Living Torah).

II. Dancing in the Talmud

In the Talmud, dancing figures prominently in the Sukkos celebrations in the Temple, the Simchas Beis Ha-Sho’eivah. The Mishnah and Gemara (Sukkah 51a-b, 53a) describes how the Torah scholars would entertain the large crowds with dance. However, it is clear that those were fire dances, individuals dancing with torches, sometimes tossing them high into the air. There is no indication that these rabbis were dancing the hora.

Elsewhere, the Talmud explicitly discusses a circle dance. The Mishnah (Ta’anis 26a) states on the the 15th of Av (Tu B’Av), single women would dress similarly (so as not to embarrass the poor) and go out and dance in order to attract a suitor. The Mishnah uses the word “machol,” meaning a circle dance.

At the end of the passage and the tractate, the Gemara (Ta’anis 31a) adds that in the future God will make a circle dance with the righteous:

Use of the word “machol” implies that this is not just a circle but also a circle dance. Of course, this passage is merely an allegory for the afterlife, as R. Avraham Ben Ha-Rambam (Milchamos Hashem, ed. Margoliyos, p. 75) pointed out. However, this means that there is unique symbolism in the circle dance.

R. Avraham (ibid.) explains the significance of the circle. It represents joy of knowledge attained. In the afterlife, the righteous will have complete understanding of God, something that is impossible in this world (the finger pointing directly at God showing the completeness of the divine understanding). This is a very Maimonidean understanding of the afterlife, unsurprising coming as it does from Maimonides’ son. R. Bachya Ben Asher (Commentary to Ex. 25:30) explains the circle from a more kabbalistic perspective. In the afterlife, souls enjoy being in God’s presence. The circle represents the endless joy the righteous will receive in the afterlife. For both commentators, the circle dance shows spiritual joy. However, for R. Bachya, the circle dance is the endless joy of basking in God’s presence while for R. Avraham, it is the joy of divine understanding.

The Maharal (Be’er Ha-Golah, ch. 4) explains the passage in even more detail, allowing for two interpretations of his position. The Maharal sees dance as a way to achieve spiritual pleasure. Joy that remains in the heart is limited but if it is acted out, as in dance, it knows no bounds. Additionally, ecstatic dance leaves no time for thought and thought, the Maharal states, impedes joy (I’m still thinking about that). Since the joy of the righteous in the afterlife is boundless–active and without any impediments–it is described as dance.

True joy is spiritual. The Maharal believes that the physical is potential. When someone acts, he engages the actual rather than the potential. Dance is a form of engaging the actual. Therefore it generates a spiritual joy. Similarly, the righteous in the afterlife will enjoy spiritual pleasure. It is not a literal dance but a joy that is metaphorically described as dance. This joy in the afterlife is joy in God. Therefore, God is described as sitting in the middle of the circle, with everyone pointing at Him. Additionally, the righteous will be more complete in the afterlife, without their physicality serving as an additional barrier to God.

When you dance, you glide above ground. You jump and you leap. The Maharal explains that the rising of dancing symbolizes the additional holiness of the righteous in the afterlife. They rise above their physical bodies that hold them back in this world.

IV. The Significance of the Circle

However, as we noted above, the Talmud describes two kinds of dance. There is the sole dancing in the Temple and the circle dancing of the young women. The Maharal has focused on the significance of dancing. But why are the righteous described as engaging in specifically a circle dance?

The Maharal explains that in a circle, every point faces the center. Similarly, the righteous will all connect to God and only to Him. And yet, just like the circle’s center is set apart from the perimeter, God is ultimately unreachable, distinct from the righteous.

The Maharal finds great significance in that as people move around the circle, each individual takes another’s place. He says that it is to prevent the claim that a righteous individual will have limited connection to God, as we do in this world. Rather, the movement in a circle shows that the righteous will connect to God from all sides, all angles, on every level.

R. Eliyahu Dessler (Mikhtav Me-Eliyahu, vol. 4 p. 150) interprets this in a marvelous, if not entirely plausible, way. He explains that every individual has a role in this world. If you faithfully fulfill your religious purpose, you merit a place among the righteous in the afterlife. Each righteous person on his own cannot fulfill everything but together, all the individuals who have achieved their individual goals, as a group have reached completion. As long as you what you are supposed to, you join together with others and fulfill everything. [2]See also R. Chaim Friedlander, Sifsei Chaim, Emunah Ve-Hashgachah, vol. 1 p. 219.

R. Yehoshua Hartman, in his edition of Be’er Ha-Golah (vol. 1 p. 502 n. 1086) argues with R. Dessler’s interpretation without naming his interlocutor. R. Hartman argues that in the Maharal’s view, a person is judged in the afterlife entirely on his own merits. In this world, we are judged as groups; cities and countries are punished based on majority. But in the world-to-come, someone righteous can only connect to God based on his own accomplishments, not those of others.

Rather, the Maharal means that the circular dance implies complete connection with God. Each righteous person, based on his own merits, lacking the physical which serves as a barrier to the divine, achieves full connection. 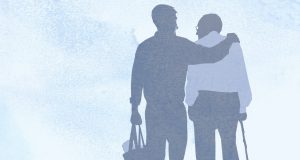