Rabbi Lamm on Women and Tefillin 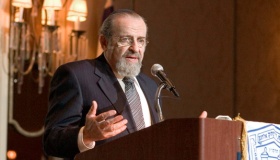 Rav Norman Lamm’s son-in-law, R. Mark Dratch, was kind enough to forward with permission to publish this letter he sent to his nephew, R. Ari Lamm

You asked me about comments Zeida made in a sermon, “As If Things Weren’t Bad Enough” (April 8, 1972), which are now receiving wide attention, and whether these comments reflect his halakhic opinion.

In his sermon he wrote,

The principle of separate seating in the synagogue must not be thought of as representing any claim of inequality of inferiority. Its purpose is to remove the distraction that may come because of erotic stimulation. If the purpose of coming to a synagogue is for American Jews to indulge in a kind of social ritual of self-identification as Jews, then there certainly is no reason for men and women to sit separately. But that is not our conception of prayer. For us, is the presentation of oneself before God, the focusing and concentration of all his thoughts on the One before Whom he stands, and hence any distraction must be banished. The ideal for prayer, so conceived, is kedushah or holiness; and the bane of holiness is eroticism. Kedushah is perishah me–arayot. If ten women so desire, they may organize a minyan, and conduct tefilah be-tzibbur, public services; and in such a case, if men straggle in to such a synagogue, it is they who are guests sitting behind the mechitzah. I am told that in Boston there is a group of young Orthodox students, all girls, who are highly concerned about their role in Judaism, and have decided to pray every morning while donning the tefillin. I have no objection to that, and would encourage them. There was a time that (according to Rema) such behavior was frowned upon as yuhara , or arrogance, but that was because it was an act of exhibitionism by an individual. However, the case is far different when a whole community of women has decided to accept such a mitzvah. More power to them! I wish that every man would join a minyan to lay tefillin.

Before addressing the issues directly, allow me to share a number of observations about Norman Lamm—the man, rabbi, scholar, my father-in-law, and your grandfather—and the masorah in learning, psak, and leadership I received from him during the last 32 years. These points will put my comments into perspective.

First, as you know, Zeida is a complex and nuanced person. In my introduction to the Vayikra volume of his newly published “Derashot LeDorot” I described him as “a man whose brain is that of a Litvak, whose soul is that of a ḥassid, whose DNA is that of a Galitzianer, whose disposition is that of a scholar, whose pen is that of a poet, whose eye is that of an artist, whose tongue is that of an orator, and whose heart is that of a ba’al ḥessed.” He is all these, and more. Because of this, as he suggested when he proposed the term “Centrist” to describe our brand of Orthodoxy, which he based on the Rambam’s comment in Hilkhot Deot 1:6, שיהא אדם שם דעותיו תמיד, he approaches every issue thoughtfully, critically, and with nuance. There are no pat answers in his world.

Second, Zeida is an independent thinker, and encourages and supports this quality in others. His ideas, of course, are always nurtured by extensive study, research, reading, knowledge, and contemplation. This is true in worldly matters as well as in Torah and Halakhah. This, he told me, is the legacy he received from the Rav, zt”l. Rav Soloveitchik nurtured Zeida’s creativity and analytic abilities in learning; he would accept nothing less from him. He also supported his right and responsibility as a posek for his community, even during the early stages of his rabbinate. You know how the Rav encouraged him to stand by his position in the controversial Manhattan eruv situation—even when the Rav himself later came out against it. And during my rabbinic career, before he would even discuss a matter with me, Zeida forced me to be fluent in the texts and sources relevant to the religious matters to which I needed to respond, referred me to others if he felt they had greater expertise (as he himself has asked sheilos of others when he felt it was necessary), and taught me that it was my obligation to accept personal responsibility for the decisions I would ultimately share.

Third, Zeida is sensitive to individuals and their needs. He has the strength to look beyond contemporary trends of religious correctness to see what is needed and desirable, and what is right—religiously and humanly—in any given situation. He has the strength of character to articulate and support those convictions in the face of harsh criticism and personal attacks.

Fourth, Zeida championed new and novel opportunities for women to grow intellectually and religiously. It is he who asked the Rav to give the first gemara shiur to women at Stern College. It is he who developed and supported the post-graduate Talmud program at Stern College. He was an early supporter of the institution of Yo’atzot Halakhah (which includes in its ranks your cousin, Tova Warburg Sinensky).

And finally, Zeida is religiously conservative at heart when it comes to matters of shul practice. He told me on a number of occasions that although he can understand, and sometimes even justify, some of the evolutions in synagogue practice that he sees, he did not want to have a shul which his grandfather (R. Yehoshua Baumol, zt”l, author of Responsa Emek Halakhah,) would not recognize.

All that being said, let me respond to the issues of his 1972 sermon. You told me that there are those who are citing these lines as Rabbi Lamm’s psak in these matters of current interest. As you suggest, citing these sentences as a definitive halakhic position is improper for a number of reasons.

I spoke with Zeida about this and he told me that he did not consider his comments in this sermon as a psak. After all, halakhic rulings are tersely argued, citing and analyzing numerous sources. Sermons are of a different genre. They are popular pieces of rhetoric meant to inform, inspire, and challenge. (Zeida’s sermons always did!) This is not meant to denigrate the value of sermons (see Zeida’s “Notes of an Unrepentant Darshan” to prove the point) nor to dismiss the care and precision with which he constructed every drashah. His words clearly show sympathy, although not unreserved, for opportunities for women’s spiritual expressions in general as well as his support for some of the social, economic, and political concerns that were beginning to appear on the public sphere in the early 70s.

What was Zeida’s intention? To answer this question, let’s consider his audience. Who sat in the pews of the Upper West Side’s Jewish Center in 1972? What was their general level of observance? Interesting to me is a comment Zeida makes in an earlier sermon to the same congregation. On June 19, 1965, Zeida quoted the Vilna Gaon’s rhetorical take on the obligation of met mitzvah. It is not the unclaimed corpse to which it literally refers, but, rather,

the mitzvah itself! The met mitzvah …includes…those mitzvot which have been abandoned, neglected, and unattended….So it is with the various observances of Judaism: they are often at the mercy of religious fashion.

To illustrate this point, Zeida brings as examples the mitzvot of making loans (as opposed to outright giving tzedakah), mishloach manot on Purim, sha’atnez, standing for the elderly, washing hands before eating bread, davening minchah, and tzni’ut. While some of these mitzvot still require our special attention, many today are de rigueur. My sense, from conversations with Zeida, is that in his 1972 sermon he was cajoling a generally religiously nonchalant community to be more passionate and committed in their desire to perform mitzvot. He was voicing his concern against religious showmanship (hence the emphasis on yuhara, which the Rema associates with tzitzit rather than tefillin). He also, in the context of other issues, was validating the emotional and spiritual needs of women that were just beginning to become the subject of public attention.

Whatever Zeida would say to a woman who would approach him privately to ask about wearing tefillin, I do know that he would listen to her very carefully—with dignity and respect—in order to understand her and her needs and her dreams, he would examine the halakhic sources with great scrutiny to understand the thrust of halakhic history and tradition, and he would struggle to find the answer that was sensitive and proper. He would, as he always does, take a holistic approach in dealing with this challenge, one which he would see as shared by her, her rabbi, and the Torah community. And what would he say to her? He told me that if her intentions were le-shem Shamayim, he would suggest that she don tefillin privately.

I have had my share of issues, public and private, with which I dealt as a pulpit rabbi. Zeida’s guiding hand and abiding trust in me enabled and empowered me to grow in my learning, my responsibility, and my sensitivities. You, on the eve of your rabbanut, have that same trust. Use it humbly. See it as a challenge. Exercise it responsibly and without fear. Cherish it as an expression of our love, trust, and confidence. Accept this masorah of leadership and scholarship…lehagdil Torah u-le-ha’adirah.