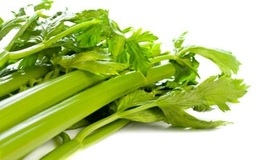 There is an opinion that one should wash one’s hands for karpas specifically at the Seder table, and not in another location, such as the kitchen sink [6]Rivevot Ephraim 1:300. though common practice is not to be particular about this. According to most customs, celery, potatoes, parsley, or radishes are used for karpas [7]Regarding the various vegetables which may be used for karpas see: Magen Avraham 473:4; Machatzit Hashekel 473:4; Shulchan Aruch Harav, OC 473:16; Chayei Adam 130:5; Kaf Hachaim, OC 473:49; Minhag … Continue reading though ultimately any vegetable is acceptable. [8]OC 473:4. However, it is best not to use a type of vegetable for karpas that could theoretically be used for marror. One must be sure not to use the same vegetable for both karpas and marror. [9]Mishna Berura 473:20, 475:25. There is a view that the vegetable used for karpas must be raw, or at least a vegetable that can be eaten raw. According to this approach, the widespread use of a potato –which is cooked beforehand and cannot be eaten raw– would be disqualified. Common custom, however, is not to be concerned about this. [10]See Mikra’ei Kodesh p. 184-187; Siddur Pesach K’hilchtato 2:5:3.

The karpas should be dipped into the salt water in its entirety; not merely a small portion of it. One should also dip it with one’s hands rather than with a fork. [11]Piskei Teshuvot 473:23. According to many authorities one should eat less than an ounce of karpas in order that one not be obligated to recite a bracha achrona. [12]OC 473:6; Mishna Berura 473:55,55. But see Rambam, Hilchot Chametz Umatza 8:2. Nevertheless, one who did eat a large amount of karpas should not recite the bracha achrona afterwards. [13]Shulchan Aruch Harav, OC 473:18; Mishna Berura 473:56. Most people do not recline when eating the karpas though some have the custom to recline. [14]Rivevot Ephraim 4:113:3; Moadim U’Zmanim 7:183.

There are a number of reasons why karpas is eaten at the Seder and what it represents. [15]Bach, OC 473. We are taught that merely having the ability to enjoy a meal that includes vegetables and dip is in itself a sign of freedom, as slaves are not provided with such luxuries. The karpas also serves as an appetizer to suppress one’s hunger thereby allowing one to enjoy the Seder without any stomach grumblings. Some sources suggest that the karpas is actually a “warm-up” to the dipping of the marror. [16]See Pesachim 114b.

The karpas also serves to recall the fancy coat that Yaakov Avinu gave to Yosef, which ultimately led to our descent to Egypt and the subsequent slavery. [17]Shabbat 10b; Sefer Hamanoach, Hilchot Chametz U’matza 8:2; Ben Ish Chai, Tzav. Indeed, fine linens, such as those that comprised Yosef’s elaborate coat are referred to in Scripture as “karpas“. [18]Esther 1:6; Megilla 12a; Rashi, Bereishit 37:31. Finally, the dipping of the karpas is intended to arouse the children’s curiosity so that they should ask questions as to why this night is different from all other nights. [19]Pesachim 114b; Tur, OC 473:18.
——-

2014-04-14
Ari Enkin
Previous: Daily Reyd
Next: If the Social Orthodox Had Been in Egypt, Would They Have Been Redeemed?