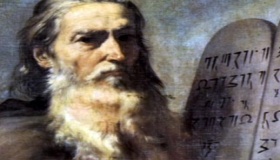 The wise son of the Haggadah asks: “What are the testimonies, the statutes and the laws which the Lord, our God, has commended you?” (Deut. 6:20). R. Zvi Kanotopsky (Rejoice In Your Festivals: Penetrating Insights Into Pesach, Shavuot and Sukkot, p. 62), a leading student of R. Joseph B. Soloveitchik (link), explains in a 1952 sermon that this was originally said to the generation of the Exodus. “The wise son is asking about צווי, the commandment. He is asking about the revelation from his father who stood at Sinai.”

R. Kanotopsky continues, in a statement of faith that I can only assume was directed against Conservative theologians but now applies equally to some thinkers who are called Orthodox (p. 63):

There is a fundamental religious principle that is sacred to us, a principle that is the very essence of our theology. We believe that revelation is not a continuous process. The Children of Israel were redeemed from the bondage of Egypt so that they might stand at the foot of Sinai, experience the drama of revelation and receive the Torah, which was given at that moment of revelation…

There are Jews today who would have us abandon the fundamentals of our faith. There are Jewish intellectuals who would have us believe that revelation is a process, a continuous process — which might have begun at Sinai but which continues with the change of time — with changing concepts and with changing ideas. It is this point of view that we are obligated, by our faith, to negate and to reject. The word אתכם (to you), which is used by the wise son and which cause so much consternation, emphasizes the very essence of our faith.