The Fast of Esther 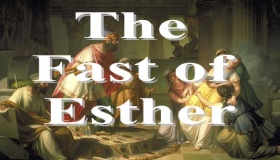 The Fast of Esther is perhaps the most misunderstood of the annual public fast days regarding what it represents and why we actually fast. It is not mentioned anywhere in the Talmud, [1]Maggid Mishna; Rambam, Hilchot Ta’anit 5:5. and only makes its first appearance in Rav Achai Gaon’s “Sheiltot”. [2]Sheiltot, Vayakhel 67. Contrary to popular misconception, the Fast of Esther is not the anniversary of the original fast that was decreed by Esther. In fact, Queen Esther’s original fast was actually a three-day affair that coincided with the start of Pesach. [3]Aruch Hashulchan , OC 686:2. The record holder for the longest fast is Adam, who fasted for 130 years; see Eruvin 18b. That’s right – Esther (and the Jews of Shushan) had no Pesach Seder that year. [4]Megilla 16. As such, there have been individuals in the past who observed a three day fast (though not consecutively) following Purim in order to better observe, in spirit at least, the original “Fast of Esther”. [5]Minhagei Eretz Yisrael (Gellis) 35:1; OC 286:3. Today, however, this practice is no longer found. [6]Aruch Hashulchan, OC 286:6.

There are a number of opinions as to what the status of today’s Fast of Esther really is. According to one school of thought, we observe the fast simply in order to recall that Queen Esther fasted on behalf of the Jewish people. This is true even though we don’t fast on the actual date that Esther fasted. [7]Rambam, Hilchot Ta’anit 5:5. According to this opinion, the fast has the status of a rabbinical commandment.

Others are of the opinion that since the fast isn’t even observed on its original date, it cannot command the status of a rabbinical law, and rather, it has the status of a custom. According to this approach, the fast commemorates Esther’s preparations in advance of her meeting with King Achashverosh, where she was going to plead on behalf of the Jewish people that he save them from Haman’s plot. [8]Beit Yosef 686.

According to yet another approach,  the fast is intended to teach us that when under attack, we are to join together and turn to God for our salvation through fasting and prayer. One will notice that the Fast of Esther takes place on the thirteenth of Adar, which was the day that the Jews were permitted to take revenge upon their enemies. The entire nation fasted and prayed for success in the battle that was about to be launched. Indeed, throughout history, we find that the Jewish people often fasted in war time.

It is noted, however, that there is no textual support to the claim that the Jewish people actually fasted in the 13th of Adar; it is essentially mere speculation. [9]Kitzur Shulchan Aruch 141:2. Indeed, the Megillat Ta’anit actually forbids one to fast on the 13th of Adar, as it is a festive day known as “Yom Nikanor” – the day on which the evil Greek general Nikanor was captured and killed by the Maccabees, which took place after the Purim events. [10]1 Maccabees 7:26-50; 2 Maccabees 15:36; Ran to Ta’anit 7a. This seems to support the theory that Ta’anit Esther is of recent vintage, no earlier than the Geonic period, as mentioned above. Some suggest that the Fast of Esther might be an exercise to secure atonement in advance of any excessive or inappropriate frivolity that one might engage in over Purim. [11]Kav Hayashar, cited in Piskei Teshuvot 686:2.

Unlike other communal fast days, the Fast of Esther has both a mournful flavor as well as a festive one. It is mournful in that it recalls the near annihilation of the Jewish people at the hands of Haman and Co., yet at the same time, it is joyful in that it expresses our confidence that God will continue to save us from our enemies in the future, as He did in the days of Purim. It is taught that prayers recited on the Fast of Esther are especially effective. Among the recommended prayers of the day is the recitation of Tehillim Chapter 22 followed by an outpouring of private and personal requests. [12]Kav Hayashar 97.

The Fast of Esther is unique among the other fast days in a number of ways. If any of the other fast days fall out on Shabbat, they are postponed to Sunday. However, if the Fast of Esther falls out on Shabbat, the fast is advanced to the preceding Thursday. The reason for this is that all the other fasts recall tragedies, the commemoration of which is to be delayed, rather than advanced, when they cannot be observed on their true date.  The theme of the Fast of Esther, however, is one of repentance, which poses no problem to observe earlier rather than later. [13]Levush 550:3; She’iltot Vayakhel 67. Some suggest that observing the Fast of Esther is part of the pirsumei nissa, publicization of the miracle, aspect of Purim. [14]<a href=”http://www.torahweb.org/torah/2007/moadim/rsac_esther.html”> http://www.torahweb.org/torah/2007/moadim/rsac_esther.html </a>

What if one is unable to fast due to illness, weakness, or the like? The Rema accepts the view that the fast is a custom rather than an obligation. [15]OC 686. As such, he rules that those who are pregnant, nursing, or otherwise ill can forego the fast. It goes without saying that those who do eat on a fast day should eat only the minimum and not indulge in delicacies. [16]Eishel Avraham (Botshatch). There exists a custom, of questionable authority, for women not to ever fast on the Fast of Esther. [17]Piskei Teshuvot 550:1. Some authorities permit one who feels that the fasting will harm him or negatively affect his Purim celebrations to forgo the fast. [18]Besamim Rosh 239.