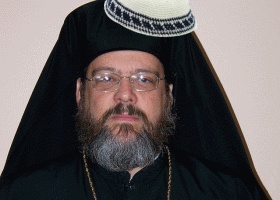 by Elli Fischer [1]Shout out to Dan M, Chaim S, and Aharon F for inspiration and ideas

In the spirit of Purim…

The Russian takeover of Ukraine has extended into the realm of religion. High-ranking clergy of the Russian Orthodox Church have begun using the art of persuasion, as well as truncheons, to assert their hegemony over the ritual lives of their ethnic cousins. The mainstream Ukrainian Orthodox Church is a vassal of the Moscow Patriarchate, yet it has had competition in recent years. One new movement calls itself the “Ukrainian Autocephalous Orthodox Church” (we have never heard the word “autocephalous” before, but we assume it means “open” or something equally problematic). Another group has created its own seminaries and hierarchy under a Kyiv-based patriarchate. Both insist on autonomy from Moscow and have recruited a small army of sanctimonious bloggers to draw interest in their plight.

The response from Moscow has been swift. Low-ranking Russian Orthodox functionary Ivan Kvetchkin was first to attack the Ukrainian clergy:

Another Muscovite seminarian added: “These sectarians worship all sorts of minor local saints. Not every priest is a saint! They just beatified this new saint, Yuri Dykulus. Can you believe that they turned that peasant into a saint?”

Moscow also expressed concern that the Ukrainian churches not under Russia’s thumb were well on their way to joining Catholicism. “This is all coming from Western Ukraine, which has a lot of Polish Catholics,” said one unidentified elder, “This is not an Orthodox movement at all. It’s neo-Catholic. Their leaders all grew up Catholic or at this blurry line between Catholicism and Orthodoxy. A few hundred years ago, a Ukrainian ‘Orthodox’ church became Catholics because they were promised that their priests could stay married. Unless we draw a line now, this will happen again. Already these young priests think they can kiss Matushka [2]Matushka is the rough equivalent of “Rebbetzin” in Russian. Really. in public. It’s an outrage! Mark my words, within a decade they will be ordaining women as Maharushkas. You won’t be able to tell that they’re Orthodox.”

An ostensibly more conciliatory approach was taken by Russian Orthodox Primate Mitya Partovay: “Any Ukraininan priest from whatever church that calls itself Orthodox is more than welcome to deliver a sermon in my church,” apparently acknowledging that Ukrainian splinter churches might still play a positive role. The patriarch continued, “I mean, a sermon is just words with no ritual significance. Technically a tape recorder can give a sermon. Even monkey can give a sermon.”

This conciliatory attempt, however, sparked a new round of outrage among social-media savvy Autocephalous Orthodox priests, who felt the Primate was comparing them to monkeys. “This is but another example of the failure of Russian Orthodox leadership,” said Vlad Upstartsky, an outspoken autocephalous priest, “They do not meet the very real needs of Ukrainians, and the people have started voting with their feet.” Given the relatively brief democratic tradition in the Ukraine, it is unclear whether Upstartsky meant that last bit literally.
———