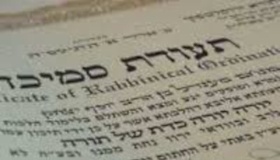 In June 1970, Rabbi Alex Weisfogel published a pithy rebuke of the American Orthodox rabbinate. A graduate of the Mirrer Yeshiva in Poland, Weisfogel gained a foothold in the United States as a rabbi in Springfield, MA. Still, he was a proud European extract. To Weisfogel, it was a quality that separated him from his younger colleagues who had studied in American yeshivot. In fact, he held this new rabbinic breed in contempt and blamed inferior American-trained rabbis for the “crisis of leadership” that to Weisfogel was so evident within the Orthodox camp at that time:

What does a frantic new rabbi in the field do when a sh’eylah comes his way? A wag once quipped that stamped on the back of every American yeshivah semichah certificate is Rabbi Moshe Feinstein’s telephone number for just such emergencies. [1]Alex Weisfogel, “Y.U.: American Phenomenon,” Jewish Life 37 (May-June 1970): 49.

Though he was the dean of halakhic decision-making in America, Rav Moshe was not the only one approached with queries; for those within the Yeshiva University orbit there was, of course, Rabbi Joseph B. Soloveitchik who commuted regularly to New York from his home in Massachusetts. Accordingly, Weisfogel continued that “perhaps for Y.U. musmachim it is a Boston number.”

Last month, Yeshiva University reminded its rabbinical students that its phone lines were still open and on occasion mandatory for those seeking to “make decisions about complex halakhic issues.” [2]“Statement from YU and RIETS,” YUNews (February 27, 2014). This set off a number of criticisms. [3]See, for example, see Steven Bayme, “Modern Orthodoxy at a Crossroads,” The Jewish Week (March 4, 2014). Several commentators recoiled at the threat of YU’s Rabbi Isaac Elchanan Theological Seminary to refuse ordination to a student who supported a controversial religious service that is at odds with the mainstream. These writers pointed out the impropriety of withdrawing ordination from a student previously in good academic standing, even as he failed to accept a position agreed upon by the “entire rabbinic faculty of RIETS.”

At the core of their concerns, Orthodox Jews have asked: why is this fair? I, too, considered all of this, but through a slightly different lens: when did the threat of ordination withdrawal become fair? Ultimately, though, the most apt question is: when did revoking rabbinic ordination become unfair?

Rabbinical policing was a common anti-reform strategy in the nineteenth century for those who cautiously guarded their versions of Orthodox Judaism. In Frankfurt, Rabbi Samson Raphael Hirsch routinely called into question the “orthodox” bona fides of Rabbi Zacharias Frankel and his students at the rabbinical seminary in Breslau. Hirsch did this because he was nervous about the changes that Frankel’s students might issue in traditional German synagogues. In his monthly journal, Hirsch charged that Frankel’s beliefs were beyond the pale of Orthodox Judaism. At least one reader questioned the basis for Hirsch’s harsh ruling. A young Hermann Cohen testified that he observed Frankel “standing in the synagogue with the prayer shawl over his head” and “singing songs” at Sabbath and holiday meals. [4]Hermann Cohen, “Briefkasten der Red.,“ Jeschurun 7 (February 1861): 297. Hirsch dismissed any and all testimonies on behalf of Frankel’s punctiliousness. For Hirsch, Frankel’s observance of Halakhah meant little if he could not back it up with more “pious” views of the Talmud and the events at Sinai.

Hirsch also took aim at ordination certificates. He did his best to monitor the German rabbinate and wrote discouraging letters to congregations rumored to be considering Breslau graduates. When asked for his opinion, the much more modern Rabbi Esriel Hildesheimer voiced similar concerns about Frankel and his students, even if he did not fully agree with Hirsch’s vilification. To gain Hildesheimer’s approval, a Breslau graduate was required to sever his connections to Frankel and his colleague, Dr. Heinrich Graetz. Ordination at Hildesheimer’s Berlin seminary was conditional, as well. Any student found to issue a ruling that contradicted one of Hildesheimer’s core positions was excommunicated. In a sense, Hildesheimer’s seminary produced missionaries equipped with his sophisticated brand of Judaism. Simply put: anyone who tampered with Hildesheimer’s gospel was a threat to his life’s work. [5]See David H. Ellenson, Rabbi Esriel Hildesheimer and the Creation of a Modern Jewish Orthodoxy (Tuscaloosa: University of Alabama Press, 1990), 81-82.

The situation in America hardly differed. In response to the publication of a slightly revised prayer book, traditionalist Rabbi Bernard Illowy wrote that any rabbi who used it could not be “considered a Jew.” [6]“Albany,” The Asmonean (July 26, 1850): 108. Ordinations were annulled in the New World, too. In the early twentieth century, RIETS graduates received their diplomas with a stipulation: President Bernard Revel reserved the right to revoke ordination of anyone who refused to leave a congregation that featured mixed pews. Revel’s biographer recorded an instance when a young rabbi refused to depart his post. In 1933, Revel published a letter that formally stripped the rabbi of his ordination and declared him unfit to answer “inquiries of Jewish Law.” [7]See Aaron Rothkoff, Bernard Revel: Builder of American Jewish Orthodoxy (Philadelphia: The Jewish Publication Society of America, 1972), 165-66.

Revel’s stance was not solely motivated by his reading of Jewish law. Like Hildesheimer before him, Revel viewed RIETS products as missionaries for his orthodox cause. His crusade to reposition Orthodox Judaism in America far outweighed any thought of manufacturing rabbinic scholars capable of deciding Halakhah on their own. Revel’s students who flouted his positions were therefore harmful to Yeshiva’s goals. Rescinding ordination was a last resort for Revel, and a drastic one at that. Yet, he sometimes felt it was a necessary means to an Orthodox end.

Of course, Orthodoxy hardly held a monopoly on this sort of practice. While I am unaware of any action taken against a graduate’s ordination, there is ample evidence of non-Orthodox seminaries going to considerable lengths to guard the values of their institutions. In 1907, President Kaufman Kohler fired three faculty members of Hebrew Union College in Cincinnati. By all accounts, all three teachers were satisfactory scholars and educators. According to one of Kohler’s closest friends, the HUC president called for the faculty members’ resignations because “they were unsympathetic with the standpoint of the institution.” [8]See David Philipson, My Life as an American Jew (Cincinnati: John G. Kidd and Sons, 1941), 190.

Likewise, leading members of the Jewish Theological Seminary in 1945 felt it well within their power to delegitimize Rabbi Mordecai Kaplan. Though the faculty of the Conservative school did not agree with the more militant opposition to Kaplan and his new radical prayer book, they did insist that Kaplan was detrimental to the goals of JTS. [9]See Zachary Silver, “The Excommunication of Mordecai Kaplan,” American Jewish Archives Journal 62 (2010): 34-35.

At some point, however, revocations were no longer in vogue. In all likelihood, “modern sensibilities” had a part in moving the trend in another direction. But perhaps, this had also to do with Rabbi Soloveitchik and his hallowed telephone number. At RIETS, the Rav’s presence loomed large and his positions became doctrine for many of his students and followers. Take, for example, the Rav’s staunch opposition to interfaith dialogue on theological matters. In 1967, the Jewish Community Council of Boston asked Rabbi Emanuel Forman of the Young Israel of Brookline if his congregation would participate in a panel on “Jewish-Catholic Relations.” Forman declined, explaining that “the major Orthodox groups are following the policy of Rabbi Joseph Soloveitchik.” [10]Minutes of the Jewish Community Council Meeting, April 6, 1967, I-123, Box 7, Folder 1, American Jewish Historical Society, New England Archives. On many other issues, however, the Rav was less insistent. He offered his learned suggestions but left the final decisions to local rabbis. [11]See Saul J. Berman, “The Approach of the Rav to P’sak and Public Policy,” in Mentor of Generations: Reflections on Rabbi Joseph B. Soloveitchik, ed. Zev Eleff (Jersey City: Ktav, 2008), 61-66.

No doubt, the Rav’s flexibility with his students poses a difficult challenge to his halakhic legacy. Moreover, it also possibly confused matters in his time. To my knowledge, the Rav never excommunicated any of his students, though, as one disciple testified in the late 1960s, the Rav “naturally would disassociate himself from many proposals and policies advocated by some of his ‘followers.’” [12]Walter S. Wurzburger, “The ‘Radicals,’” Jewish Advocate (May 4, 1967): A3. The closest he came was probably in 1975 when the Rav denounced Rabbi Emanuel Rackman’s halakhic formula to solve the agunah crisis. Speaking before the Rabbinical Council of America, the Rav described Rackman’s plan as a threat to Orthodox Judaism. “Do you expect to survive as Orthodox rabbis?” asked the Rav to those considering Rackman’s proposal. [13]See David Singer, “Emanuel Rackman: Gadfly of Modern Orthodoxy,” Modern Judaism 28 (May 2008): 140. Yet, that the Rav prefaced his remarks by stating how he “never criticized anybody” indicates just how rare an occasion the Rackman affair was for him. [14]It is also important to point out that Rackman was just a few years younger than the Rav and never formally his student.

On the whole, the Rav departed sharply from the viewpoint of Hildesheimer and Revel. Unlike those leaders who often spoke about the condition of their denomination in drastic tone, the Rav early on rebuffed the “erroneous feeling that the present generation of Orthodox is probably the last one.” [15]“Honor Rabbi Soloveitchik at Reception,” Jewish Advocate (November 15, 1935): 1. Unwilling to furnish the firmest of boundaries for Orthodoxy in America, the Rav had little need to police his students or hold their ordinations hostage. Instead, he confidently trusted that the best and brightest pupils would steer Orthodoxy on its most correct course.

The trend against ordination confiscation continued long after the Rav retired in 1984. For example, one member of the RIETS faculty called for the revocation of one YU ordainee’s credentials in 1999. The rabbinical graduate publicly announced that he was gay and subsequently called for a “deeper understanding” of homosexuality in the Orthodox community. [16]Aaron Klein, “RIETS Musmach Announces his Homosexuality,” The Commentator (May 18, 1999): 18. Nevertheless, RIETS refused to take action against the “miscreant” rabbi.

The two sides of this story collided late last month. Ordination repeals and broad rabbinic interference hold an important legacy in the annals of Judaism. For more than a hundred years, Orthodox Jews turned to this tactic in their noble battles. Still, it is undeniable that this extreme measure was one impelled by a sense of panic. That was certainly not the prevailing mood of the Rav’s Orthodox Judaism.
——–