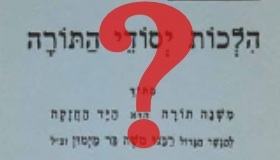 Over the years, we have returned many times to the question whether there is a decision-making process to belief (hashkafah) like there is for law (halakhah). One objection is the existence of multiple views among classical Jewish thinkers on many subjects. However, rather than proving the exclusion of belief from a halakhic-like process, it actually demonstrates the opposite.

R. Yaakov Ariel (Halakhah Be-Yameinu, ch. 1) argues for a decision-making process in belief by noting how many responsa have been written on the subject of belief. Clearly, throughout the centuries, Jews have asked their religious leaders for guidance on issues of belief. Yet, one could counter that we need to distinguish between teaching and deciding. Guidance does not imply binding response. Of course Jews looked to their rabbis to explain the complexities of Jewish belief, and the rabbis in turn offered the best answer they could based on their own understandings. But that does not mean that either the questioner or the responder considered the answer to be any more than a teaching.

I kept this in mind when recently reading Prof. Louis Jacobs’ 1975 Theology in the Responsa. Jacobs attempted to study the responsa throughout the centuries that deal with theological issues. The book is magnificent but ultimately over-ambitious. Proceeding through each century, from the Geonim through the twentieth century, Jacobs examines the main works of responsa and their theological sections. His “attempt at a fair degree of comprehensiveness” is more successful in the early centuries. As he proceeds, he misses more and more until his method nearly completely breaks down in the nineteenth and twentieth centuries, for which his selections are very haphazard and incomplete. Additionally, his definition of “theology” includes much that seems like plain halakhah (e.g. can a poor starving man steal food?). Be that as it may, the work as it stands is still an incredible review of centuries of theological (and other) responsa.

I’d like to consider here the responsa of R. Shlomo ben Shimon Duran (Rashbash of Algiers, d. 1467, discussed in Jacobs, pp. 95-101). Today, it is easy to find the theological responsa from among the 635 in the collection of Responsa Rashbash because the Machon Yerushalayim edition lists them separately in the index. [1]Under הלכות וחידושים ומליצות ופירוש מלות. Glaringly missing from Jacobs’ survey is responsum 195: Does fleeing a city engulfed in plague succeed in avoiding the decree? [2]Discussed here: link and cited by Pischei Teshuvah, Yoreh De’ah 116:8). However, his discussion of two responsa raises the issue we are addressing here.

II. The End of the World

In responsum 436, Rashbash answers the question whether the world will have an end. Rashbash states that belief in Creation is mandatory (“וכל בר ישראל חייב להאמין זה, every Jew is obligated to believe this”). However, whether the world will be destroyed is unimportant as long as you concede that God has the power to do so and depends on His will. Rashbash quotes the Rambam (Moreh Nevukhim 2:28) as saying that the world will not end and Ramban (Toras Hashem Temimah in Kisvei Ha-Ramban, vol. 1 pp. 159-160) as saying that it will. Rashbash argues that the Bible (Ps. 102:26-28) unambiguously states that the world will have an end. [3]Rashbash says that all other interpretations of this passage are forced. He concludes:

Therefore, what is revealed by this verse is in my opinion the truth. But you believe whatever you want about this.

On the other hand, regarding the end of the world, Rashbash tells his respondent to believe whatever he wants. Since Rambam says one way and Ramban says the other, you are free to choose. Even though Rashbash believes that he can prove that the Ramban is correct, he does not (or cannot?) rule conclusively on the matter.

III. Angels in the Torah

In response (no. 44) to the question of whether certain biblical events–Ya’akov fighting an angel, three heavenly guests appearing to Avraham, Bilam’s donkey speaking–happened in a prophetic dream or while awake, Rashbash answers differently. While he does not state that Rambam (Moreh Nevukhim 2:43) says that they happened in a dream, he quotes Ramban (Gen. 18:2) who quotes Rambam disapprovingly. While we see here also a dispute between Rambam and Ramban on an issue of belief that is not a fundamental principle, Rashbash does not tell his respondent to choose whichever view he wants. Rather Rashbash states his view, notes that Ramban agrees, and instructs his respondent to accept it:

Know that everything occurred while awake, and such was the view of the Ramban. This is the view one should believe and follow.

Why does the Rashbash here assert one view as valid while above he allows for either? My initial thought was that here the Rashbash implies that there is an issue of practice (וללכת בנתיבה). If so, this would fit neatly into my theory that the Rambam distinguished between beliefs that have no practical impact, for which there is no decision-making process, and beliefs with a practical impact for which we must decide. However, I cannot think of a practical application of the belief that the biblical events actually happened and were not just visions.

Alternatively, perhaps Rashbash considered this a matter of fundamental principle. Maybe he believed that we are obligated to read the Pentateuch literally. However, if so, that would mean that he considers Rambam’s own views to be contrary to a fundamental principle. I find this highly implausible, although not impossible. I consider it more likely that Rashbash was of the view that all matters of belief are subject to the decision-making process. He felt that he could rule on any issue of belief. In the case of the biblical narratives, he ruled like Ramban. In the case of the end of the world, he chose not to rule and instead merely stated his own opinion.

IV. Belief and the Halakhic Process

The variety of theological views among authorities does not undermine the idea that a decision-making process exists. After all, there are also a variety of halakhic positions. Indeed, we find support from a surprising source. In his conclusions to this volume, Louis Jacobs, who had been previously rejected by the Orthodox community for his own theological views, writes (pp. 343-344):

The result of our survey, it is hoped, has been to demonstrate that the great Respondents took their theology seriously, giving the same care and attention to questions of belief that they gave to their legal decisions… Although it had long been recognized that the Talmud uses the term ‘Halakhah’ only in the sense of a final decision of legal questions, yet, in the Responsa, the Halakhic methods of reasoning are employed even when theological questions are considered. One might almost speak of a theological Halakhah.

Jacobs concludes by stating that the variety of beliefs implies a freedom for each individual. On this, I disagree. As he pointed out, that is hardly borne out by the methodology and language of the responsa literature.
———