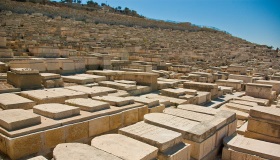 There are a number of reasons for burial in Eretz Yisroel.

Why Did Yaakov Wish to Be Buried in Eretz Yisroel?

When Yaakov was about to die he requested of his son Yosef not to bury him in Mitzrayim. [12]Bereishis 47:29-30. Rashi [13]Bereishis 47:29 “al.” quotes three reasons for this request: First, the dirt will turn into lice. Second, those who die in Chutz La’aretz will only merit techiyas ha’meisim by their bones rolling to Eretz Yisroel. Finally, he was concerned that the Egyptians would make him into an avodah zarah.

Parent Do Not Wish to Be Buried in Eretz Yisroel

There is an opinion in the poskim who maintains that it is a mitzvah for a child to make arrangements for a parent to be buried in Eretz Yisroel. However, if the parent specifically said not to bury in Eretz Yisroel then the child should not go against the words of the parent. [14]Maharalbach 63, Pischei Teshuva Y.D. 363:2.

Yerushalayim vs. Other Cities in Eretz Yisroel

It is recorded that Harav Moshe Feinstein zt”l did not advise burial in Eretz Yisroel. However, he wondered aloud why a certain gadol hador was not buried in Eretz Yisroel. Based on this, his family decided to bury him in Eretz Yisroel. [17]Stated in the Journal of Halacha and Contemporary Society 36:page 28.

The Case Against Burial in Eretz Yisroel

Many times when one is buried in Eretz Yisroel the relatives do not have the opportunity to visit the niftar too often. The Sefer Chassidim [18]710. Refer to Tosfos, Sotah 34a “avosi.” says that it is beneficial for the niftar when people come to visit and daven for the neshama of the niftar.  Others say based on the Zohar if one did not live in Eretz Yisroel during his life he should not come to Eretz Yisroel and defile the ground to be buried after he died.

Harav Henkin zt”l [19]Am Hatorah 1:15:page 5, Teshuvos Ivra 66, 68:3. was against this custom, as he felt that it exhibited haughtiness and arrogance. It used to be the custom to bury a dead person with lavish clothing. Poor people who could not afford this would leave the dead person in the street. Because of this, Rabban Gamliel left a will that he should be buried in a simple shroud and plain box. From that point on this became the custom. We see that one is not supposed to spend a lot of money on a burial. Even if one argues that it is a hiddur to be buried in Eretz Yisroel, it is uncertain if one has a right to spend a lot of money on this. He says, this is considered stealing from the widows and orphans since this will become the custom of many, and if they do not do it, the niftar may be disgraced. Perhaps it may be permitted for a gadol hador in order to show kovod hatorah. However, for others it is definitely not proper to do. One who has received a large inheritance should not waste it on caskets, marble monuments, and the cost of the trip to Eretz Yisroel. Rather, he should use the money to support Torah and give tzedakah. [20]Teshuvos Ivrei 66:page 90.

Exhuming the Grave to Bury the Niftar in Eretz Yisroel

One exception (among others) [26]Shulchan Aruch Y.D. 263:1. to this is for the purpose of burying the niftar in Eretz Yisroel. [27]Tur Y.D. 363, Shulchan Aruch Y.D. 363:1. Refer to Am Hatorah 1:15:page 5. One can see from here that burial in Eretz Yisroel is desirable. Based on this, the Har Tzvi [28]Y.D. 274. was asked if the Karliner Rebbe zt”l, who died in Chutz La’aretz, was allowed to be taken to Eretz Yisroel. In addition, the Rebbe zt”l yearned to live in Yerushalayim and those close to him knew he wanted to be buried there; therefore, it was permitted to bring him to Eretz Yisroel.

Harav Moshe Feinstein zt”l [29]Igros Moshe Y.D. 3:153. was asked whether or not Moses Montefiore and his wife may be brought to Eretz Yisroel for burial. Harav Moshe zt”l ruled that “only a child has the authority to exhume the grave, not a third party. In addition, this would be a disgrace for all the Sefard and Ashkenaz Rabbonim who are buried in Chutz La’aretz. Furthermore, Montefiore instructed his relatives to bury him in Chutz La’aretz even though he knew about Eretz Yisroel. If he wished to be buried in Eretz Yisroel he should have come in his later years to Eretz Yisroel in order to die there. Therefore, one should not go against his will.”

If the cemetery is not protected properly from vandalism it would be permitted to move the body to Eretz Yisroel or even to a different cemetery in the same country. [30]Shulchan Aruch Y.D. 363:1. Refer to B’nisivi Chesed V’emes 5747:pages 43-49 in depth.  This question arose when Gaza was given to the terrorists and there were many Jews buried there.

The Chelkas Yaakov [31]Y.D. 206. Refer to Shevet HaLevi 2:207:5. was consulted by someone who was instructed in a dream to move his relative’s body to Eretz Yisroel. One who has this question should discuss it with his local Rabbinic halachic authority.

One who was known to be a wicked person should not have his body dug up and brought to Eretz Yisroel for burial. [32]Chelkas Yaakov Y.D. 206:2.

Rabbi Moshe Dovid Lebovits is a Rabbinical Administrator for Kof-K Kosher Supervision and the author of Halachically Speaking volume 1 and volume 2.

Eating and Drinking Before Hearing The Shofar

The Mitzvah of Bikur Cholim – Visiting the Sick Part 2