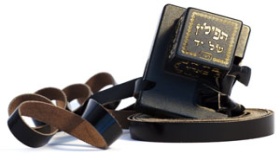 Here’s a question for you: Why don’t men wear tefillin all day long? The mitzvah is not just during morning services; it is throughout the day (cf. Tur, Orach Chaim 37). So why don’t we wear them all day?

The answer to this question is historical. It used to be that men wore tefillin all day, certainly in the times of the Mishnah and Gemara. But at some point the custom was changed to wearing them only during morning services. The good news is that we know exactly when that happened.

This laxity by many on wearing tefillin continued into the Middle Ages. Tosafos (Shabbos 49a sv. ke-Elisha) write that one should not be surprised that at that time people were lax in tefillin, since they were in the times of the Talmud also. This is attested to in many other places, and in the times of the Geonim there are even implications that almost no one in the land of Israel wore tefillin. The Beis Yosef (Even Ha-Ezer 65) quotes the Kol Bo who suggests that in some communities ashes are not placed on a groom’s forehead because the community members do not wear tefillin. There was even a responsum by R. Sherira Gaon, copied in many medieval works on halakhah, answering a question about whether it is yuhara (haughty) for a yeshiva student to wear tefillin when no one else does.

It seems that in order to defend this practice, some rishonim utilized the idea that one who wears tefillin needs a “guf naki – clean body”. The Shibbolei Ha-Leket (Buber ed., p. 382) quotes one view that “guf naki” means that a person is clean of sins. In other words, only someone without any sins is allowed to wear tefillin. This view can be found in other rishonim that explicitly dispute it. For example, the Sefer Ha-Chinukh (no. 421) states that “guf naki” does not refer to someone who has no sins or impurity, implying that someone else had suggested that it did. The author explicitly condemns those who are strict on the holiness of this mitzvah and thereby deprive the masses of the mitzvah. Rather, “guf naki” refers to the ability to refrain from passing gas and thinking improper thoughts while wearing the tefillin.

R. Moshe of Coucy (Semag, mitzvos aseh no. 3) tells of how he would travel around thirteenth-century Europe, preaching to people that they should wear tefillin during the morning prayers. Even if they cannot control themselves all day, people can certainly maintain a guf naki for the prayer services (that is the view of Tosafos [Pesachim 113b sv. ve-ein]; Rosh [Hilkhos Tefillin, no. 28 and Beis Yosef [Orach Chaim 37]; footnote 8 in the Schlesinger edition of Semag assumes the Semag agrees). Evidently, this practice of wearing tefillin only during morning prayer services took hold and the prior practice of widespread abandonment of the mitzvah slowly turned into minimal performance of it during the morning prayers.

However, someone who cannot control himself and cannot maintain a guf naki may not wear tefillin. Despite the biblical obligation, someone in a definite situation such as that should not wear tefillin at all (Shulchan Arukh, Orach Chaim 38:1). For this reason, the Arukh Ha-Shulchan (Orach Chaim 38:6) rules that those who are not obligated in the mitzvah of tefillin — such as women — should never place themselves in even a doubtful position of not maintaining a guf naki. For centuries, men who were obligated to wear tefillin refrained from doing so because of a concern for guf naki and, even today, we only wear tefillin for a minimal time. And even then, if we are certain that we cannot maintain a guf naki we do not wear tefillin. Women, who are not obligated to wear tefillin, should recognize the sensitivity surrounding this mitzvah and not place themselves in the position of even possibly lacking a guf naki while wearing tefillin without any obligation to do so. (This is without considering other issues, such as deviating from the standard custom and confirming heretics.)