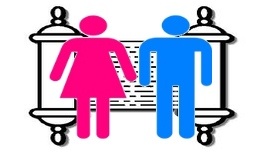 Orthodox women continue to break down ritual barriers, or at least that is what we read in the Jewish media. This past week, the media turned a story about a local school allowing girls from Conservative homes to wear tefillin into one about Orthodox women wearing tefillin. Be that as it may, we continue to discuss women and public ritual and continue to avoid the real discussion. I am as guilty as the rest. In a re-post of an old essay, I argued that tefillin is a ritual for which women have less basis to adopt than others. While true, it is to some degree beside the point.

There are two main issues: change and gender roles. Let us discuss the latter, which I think is crucial to understanding all the current debates. The traditional texts clearly discuss men and women as categories, as entire groups, even though individual men and women vary. People are unique but generalizations are utilized (see Moreh Nevukhim 3:32 that the Torah deals with generalizations and not exceptions). The Orthodox worldview, as evidenced by the most prominent literature of the past two centuries, has been that men and women have different roles in Judaism. Women are the private, home-centered individuals and men are the public individuals. Women are more spiritual and connect to God with less ritual while men require more rituals. R. Samson Raphael Hirsch (commentary to Lev. 23:43) writes:

Clearly, women’s exemption from positive, time-bound mitzvot is not a consequence of their diminished worth: nor is it because the Torah found them unfit, as it were, to fulfill these mitzvot. Rather, it seems to me, it is because the Torah understood that women are not in need of these mitzvot. The Torah affirms that our women are imbued with a great love and a holy enthusiasm for their role in divine worship, exceeding that of the man.

R. Joseph B. Soloveitchik believed that men and women were given different inherent natures as part of Creation. He is summaried by R. Avraham Besdin (Man of Faith in the Modern World, pp. 84-85) as saying:

Two humans were created who differ from each other metaphysically, not only physiologically, even as they both partake of Divine qualities. This contradicts the perverse notion that Judaism regards woman as being inferior to man. It also cuts away another false notion that there is no distinction between them in terms of their spiritual personalities. Two sexes were formed not only for propagative purposes, but they constitute existential originals. They differ in their psychical natures.

In particular, this emerges from the halakhic roles allotted to men and women. The Oral Torah teaches us that women are exempt from time-bound positive commandments. Men are obligated in various communal activities while women are exempt. Many explain that women are charged with the religiosity of the home, with the continuity of the family tradition. While the publicity-seeking atmosphere of Western culture only values the public role, and therefore places the synagogue at the center of religion, Judaism traditionally values the home over the synagogue, the private over the public.

The inner dimension of striving is the essence of the Jewish heroic act, and woman was enjoined to develop this trait of personality to its highest degree. Thus, she was assigned the private role while man was assigned the public role.

R. Joseph B. Soloveitchik devotes a chapter of his Family Redeemed (“Parenthood: Natural and Redeemed”) to discussing primarily the differences between motherhood and fatherhood. He writes (pp. 114-115):

There is a distinction between mother’s and father’s mission within the covenantal community, since they represent wo different personalistic approaches. Father’s teaching is basically of an intellectual nature…. If the father cannot accomplish it all by himself, he must see to it that his child obtains the necessary instruction.

However, Judaism is not only an intellectual tradition but an experiential one as well…. There is beauty, grandeur, warmth, and tenderness to Judaism…. Experiences are communicated not through the word but through steady contact, through association, through osmosis, through a tear or a smile, through dreamy eyes and soft melody, through the silence at twilight and the recital of Shema. All this is to be found in the maternal domain. The mother creates the mood; she is the artist who is responsible for the magnificence, solemnity and beauty.

The current debate about women’s position in Judaism is mainly (but not solely) about gender roles. Some wish to reject the worldview distinguishing between gender roles, either because they believe it does not accurately represent the Torah or because times have changed. This second argument is often made by pointing out that women can reach great heights in the secular world. Implied within that argument is that we must change religious gender roles because secular gender roles have changed. I find truth in the statement because women have accomplished a great deal in the secular world but I reject the conclusion because we should change our religious values based on secular values. The first argument above–that separate gender roles does not truly represent the Torah’s view–is, in my opinion, a false attempt at revisionism. I accept the writings of the leading Orthodox thinkers of recent times.

Once we recognize this underlying premise, we can understand the practical attitudes on the different sides of the debate. Righteous women can and always have accepted additional practices. They are exceptions to the general rules. As long as they are not attempting to change worldviews, they will face little opposition. Of course, there may be technical impediments; men sometimes face those also. But as long as they–both men and women–remain within traditional worldviews, they have leeway for personal experimentation, to find their own places within the community. That is why we can sometimes find unusual precedents in the past. Some women–Michal, for example–may have worn tefillin. Some may have been great Talmud scholars. Devorah was a prophetess. But they did not attempt to unravel traditional gender roles.

In the Charedi community today, we see some experimentation among women. There are Tehillim groups and Amen groups, among other new practices. They are usually quietly opposed by some rabbis but only mildly. Because these are not revolutionary attempts to change communal worldviews, they are left alone. Leaders have to prioritize their efforts to change the community. These are small issues, at most.

Today’s challenge is beyond that. It is about changing the community’s worldview. Make no mistake; the rhetoric is explicit. As such, it is not just about the technical issues, or about women wanting to fulfill extra commandments. It is about breaking down barriers, egalitarianism, changing gender roles. The ordination of women as rabbis is about enabling women to adopt men’s roles, not about promoting the unique righteous women of our generation. The calling of women to the Torah is also about egalitarianism. Even if technically allowed within halakhah, which I believe neither prior examples are, they are certainly forbidden when done in order to change a Torah value. There is much more to Judaism than halakhah. We must not only follow the Torah’s laws but also its worldview, its hashkafah.

There are moderate rabbis who believe women should be given more ritual opportunities. However, they are still committed to traditional gender roles, which puts them in a difficult position. They want to oppose revolutionaries but must use nuanced language so as not to oppose minor experimentation. This often leaves people wondering which side they are on. If they oppose women rabbis, why do they say that women should have leadership opportunities but not as rabbis? If they oppose women wearing tefillin, why do they say that the issue is complicated? I believe it is because they approve of individual women using their talents and spiritual accomplishments in ways that do not undermine the Torah worldview. Personally, I think these rabbis are wrong in their tactical approach and underestimate the confusion they sow by publicly allowing any experimentation. They are indirectly empowering those attempting to change the community’s hashkafah.

People are unique and need to find their own places within Judaism, embracing both the Torah spirit and laws. But sincere individuals must not be used as pawns in an attempt to alter the Torah hashkafah.