Some Notes on Isaac Leeser 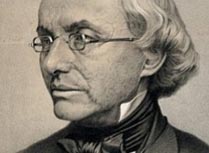 Of course, Rabbi Rakeffet is hardly through with his labor. He has continued to teach American Jewish history through his lectures and, more recently, in several online articles. TorahMusings published Rakeffet’s latest installment—a summary of his lectures—on Isaac Leeser, an important Jewish minister, journalist and organizer.

In fact, Rakeffet is not the only one who sees value in studying Leeser. In 1995, Lance Sussman published the first book-length critical biography on the nineteenth century Philadelphia traditionalist. And just last year, the University of Pennsylvania launched its Gershwind-Bennett Isaac Leeser Digital Repository. The online collection features more than 2,000 of letters of correspondence to and from Leeser. The website also provides a portal to Leeser’s Occident, his monthly journal, as well as access to other important Leeser publications. In light of these primary and secondary sources, I would like to add a few notes to supplement Rakeffet’s recent article.

1. It is somewhat overly harsh to describe “whatever Leeser tried to do” as failures. Long ago, one scholar enumerated Leeser’s “firsts.” They were:

Leeser played a critical role in all of these institutions. Moreover, most of these organizations persisted for many years before later women and men evolved or replaced them with newer iterations.

2. All of this is remarkable considering that Leeser did not receive a good Torah education. He translated difficult passages of the Bible into English and a satisfactory translation of Moses Mendelssohn’s philosophy. Yet, his traditional rabbinic education was lacking. Leeser himself admitted this. In a letter sent to Rabbi Solomon Hirschell of London in 1836, the Philadelphia minister introduced himself by explaining that his was a limited education of rabbinic works. While a young boy in Westphalia, Leeser had studied just four (of more than sixty) major tractates but was “yet too young at that time for so important a study.” Therefore, continued Leeser:

Knowing my own want of proper qualification I would never have consented to serve, if others more fitting in point of standing, information or other qualities had been here; but this not being the case, as is proved by there being yet two congregations at least in this country without a regular hazzan I consented to serve. During the whole time of my being in office constantly occurrences have taken place which demanded decisions more complicated than my own information was able to afford. But having in the neighbouring city of New York a man of sterling information and a connection of my family by name of Israel B. Kursheedt, no doubt also known to you by reputation, I occasionally referred to him. But as he is not authorized in the regular way to give decisions, and as therefore his opinions are liable to be objected to, I now address you, as already stated to ask of you, which will without doubt be a pleasure to you, to assist your brethren in America with your advice and counsel in their endeavours to worship the God of their fathers in truth. [5]Isaac Leeser to Solomon Hirschell, November 4, 1836, LSTCAT no.207, Gershwind-Bennett Isaac Leeser Digitization Project, Herbert D. Katz Center for Advanced Judaic Studies, Philadelphia, PA.

Leeser’s opponents took advantage of this weakness. Time and again, Leeser fought religious reform in the pages of his journal. On some occasions, reformers like Isaac Mayer Wise and Max Lilienthal responded with force. In other instances, they dismissed Leeser’s arguments as unlearned. For example, Max Lilienthal called it “unchivalric” were he to “use in this contest weapons, of which our adversary cannot make use.” [6]Max Lilienthal, “Why Do You Not Answer,” The Israelite (August 17, 1855): 44.

3. Across the Atlantic was another orthodox champion who could identify with this sort of slur. In 1840, Rabbi Samson Raphael Hirsch’s rivals accused the German theologian of possessing “shallow talmudic knowledge.” [7]See Michael Laurence Miller, Rabbis and Revolution: The Jews of Moravia in the Age of Emancipation (Stanford: Stanford University Press, 2010), 147. Those knocks on Hirsch’s powers of learning continued throughout his lifetime. To be sure, his enemies were exaggerating for the sake of polemic. One who reads selections of Hirsch’s Jeschurun finds that the editor ably cited from rabbinic literature.

So, perhaps Hirsch and Leeser were kindred spirits, as Rakeffet suggested. Interestingly, there are striking similarities in their tactical crusades against reform. For example, both men departed from the standard Maimonidean approach to revelation. Rambam maintained that atop Sinai Moshe received the Written Torah along with the principles of talmudic interpretation (middot ha-Torah nidreshet ba-hen). Aside from this, posited Maimonides, most other content found in the Talmud was formulated after Sinai. [8]See Moshe Halbertal, Maimonides: Life and Thought (Princeton: Princeton University Press, 2014), 116-26. Both Leeser and Hirsch believed that this interpretation allowed progressives to take advantage of the human contribution to the Talmud. Accordingly, Hirsch wrote that both the Written and Oral Law were closed (abgeschlossen) at Sinai. [9]Samson Raphael Hirsch, Horeb; Versuche über Jissroéls Pflichten in der Zerstreuung, zunächst für Jissroéls denkende Jünglinge und Jungfrauen (Frankfurt: J. Kauffmann, 1889), 19. Likewise, at a religious convention in 1855, Leeser asked his colleagues to adopt the “opinion and conviction” that the “Talmud contains the divine tradition given to Moses.” [10]“Cleveland Conference,” The Occident (November 1855): 412. It is entirely possible that Leeser obtained his position after reading Hirsch’s Horeb. That Leeser never admitted as much leaves this point unresolved.

However, Leeser did not learn his journalistic craft from Hirsch. Leeser founded The Occident in 1843. In all probability, he derived the idea to found a journal dedicated to orthodox principles from Jacob A. Franklin, who started the Voice of Jacob in London in 1841. [11]John M. Shaftesley, “Dr. Abraham Benisch as Newspaper Editor,” Transactions 21 (1968): 217. Hirsch’s Jeschurun did not appear until 1854. When a copy of the first edition arrived in America, Leeser greeted it as a sign than Hirsch was “laboring in the same cause with us, and in the same manner.” [12]“Jeshurun,” The Occident (December 1854): 441. Leeser’s own estimation of his efforts was on the mark. Not only was he the “right man” for many American Jews in the nineteenth century, he was a critical product of that particular juncture in Jewish history.
———