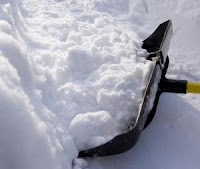 Here is what I wrote on the subject five years ago, followed by articles from R. Asher Bush and R. Ari Enkin:

I was asked about shoveling snow on Shabbos. This is a question that you need to ask your rabbi, but I’ll discuss the issues without drawing a conclusion.

One issue is whether snow is muktzah. Ostensibly, this is a simple matter because it is discussed by early authorities. Generally, you my not use something which comes into existence on Shabbos. It is considered nolad, as if it is newly born or created, and is a subcategory of muktzah. However, the Gemara (Eiruvin 46a; cf. Tosafos, Beitzah 2a s.v. ka) states that rain is not considered nolad because the moisture was in the air long before the rain fell, and therefore you can use rainwater that falls on Shabbos. Evidently, this would also apply to snow, and this is how most authorities seem to rule (cf. R. Moshe Stern, Be’er Moshe 1:20; R. Yehoshua Neuwirth, Shemiras Shabbos Ke-Hilkhasah, ch. 16 n. 110).

However, in a characteristically radical but sensible ruling, R. Moshe Feinstein (quoted in The Halachos of Muktza, p. 165 n. 10) stated that snow is muktzah for a different reason. Since we do not normally use snow for anything and it is not food for animals, snow is muktzah like stones and sticks even if it fell before Shabbos.

In 1957, there was a snow storm in Jerusalem on Shabbos and people asked R. Tzvi Pesach Frank whether they were allowed to clean the snow off their roofs (Har Tzvi, Tal Oros, soseir no. 1). One issue he raised is whether the snow has hardened or not. If it has hardened, it seems that since it has become attached to the ground it is considered part of the ground. Therefore, removing it would be similar to digging something out of the ground, which is prohibited on Shabbos. However, if it is soft snow then you are allowed to move it.

R. Dovid Ribiat (The 39 Melachos, p. 1098) also points out that this discussion is only on a hard surface like a roof, sidewalk or driveway. You may not shovel even soft snow on dirt because that is considered smoothing out the surface, which is forbidden.

R. Ribiat, in an endnote (I think 147d), quotes R. Avraham Weinfeld (Responsa Lev Avraham, no. 49) as ruling that shoveling snow is a problem of exertion on Shabbos. The Mishnah (Shabbos 126b) prohibits moving large objects on Shabbos because of the exertion. The only permission is to do it for a mitzvah. Similarly, reasons the Lev Avraham, shoveling would be prohibited unless it is to clear a path for people to walk to shul or to remove danger.

The above assumes that there is an eruv, and therefore there is no problem of carrying and/or moving the snow. What if there is no eruv? R. Menasheh Klein (Mishneh Halakhos vol. 5 no. 4: link) discusses whether, in a place where carrying is only rabbinically prohibited, you can shovel snow to prevent people from falling. He is hesitant to permit it because people often walk on snow so it is hard to determine when it is truly dangerous. He concludes that you may hire a Gentile to do it for you. Note that his assumption about where there is a biblical or rabbinic prohibition to carry is the subject of a large debate.
———
In the YU Torah journal Beis Yitzchak (vol. 40 pp. 236-238), R. Asher Bush discusses shoveling snow on Shabbos. In particular, he raises important points that I have not seen elsewhere regarding violating a rabbinic prohibition to prevent danger and exerting significant effort for the sake of a mitzvah.

You can access his Hebrew article here: link (PDF).
———
And see here for an essay by R. Ari Enkin on other halakhic issues relating to snow: link.

E-mail subscribers: Please note that posts today are automatically sent out tomorrow. This function cannot be easily turned off.