Malbim on Torah and Science 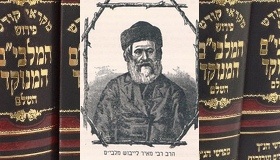 The interaction of religion and science has a long and complex history. I make no attempt here to adequately explain the different approaches to determining when to rethink cherished religious views in light of new understandings and when to cling faithfully to ancient truths. However, I find the attitude of one brilliant nineteenth century thinker fascinating.

R. Meir Leibush Weiser (Malbim) was a Talmudic savant. While still young, he wrote a short but influential commentary on the early chapters of Shulchan Arukh (titled Artzos Ha-Chaim). He held important rabbinic positions in Eastern Europe but, due to his fierce opposition to Reform, repeatedly lost those positions. His magnum opus is a commentary on nearly the entire BIble which is now considered a classic. He was widely respected in yeshiva circles, even revered, despite his unorthodox preoccupation with the Bible (rather than solely Talmud). I was taught that R. Chaim Soloveitchik held him in particularly high regard. [1]See Making of a Godol, p. 115 in the name of R. Joseph B. Soloveitchik that Reb Chaim held four of his (older) contemporaries in the highest esteem: R. Yehoshua Leib Diskin, Malbim, his father and R. … Continue reading

In his commentary to the first chapter of Genesis, Malbim twice (at least) revises prior interpretations explicitly due to new scientific discoveries. It is interesting to note not only how he proceeds but how he was subsequently criticized for it. On verse 6, Malbim addresses the creation of the “raki’a,” typically translated into English as “firmament” (following KJV). Malbim states that the commentators struggled with this, Abarbanel quoting five different views. Malbim points out that all five explanations are based on the mistaken view that spheres physically exist. However, in modern times it has become clear that the stars and planets float in space (Malbim says ether, a now-discredited theory) rather than being implanted into a sphere that surrounds the earth. He even finds midrashic support for this scientific understanding. Rather, he explains, the “raki’a” is what scientists have called “atmosphere,” where precipitation originates. [2]R. Joseph Hertz, in his Pentateuch commentary, similarly explains raki’a as “sky, the arch of heaven.” R. David Tzvi Hoffmann, in his commentary to this verse (p. 29 in the Hebrew … Continue reading It is there that the condensation in the air is converted into rain and snow, thereby differentiating between the water in the air and precipitation. [3]R. Menachem Kasher (Torah Shelemah, vol. 1 n. 551) cites the Abarbanel’s five explanations and the Malbim’s but concludes that these verses are ultimately beyond our comprehension.

Earlier, on verse 2, Malbim discusses the presence of the four fundamental elements–earth, air, water and fire–in Creation. Three of the four are mentioned in this verse–earth (ve-ha-aretz), air (ru’ach), water (ha-mayim). Malbim points out that fire is above all the other elements and some used to believe that fire emerged from air (perhaps referring to the Phlogiston theory). If so, why isn’t fire also mentioned in this verse? However, the scientists of his had shown that this is not true and that fire comes from sparks of light from the sun, which contain both light and heat (even though, he says, we know from electricity that some fire is present in air and also in water). At that time in the Creation process, the sun did not yet exist and therefore the element of fire was not present.

R. Menachem Kasher (Torah Shelemah, vol. 1 n. 331) took Malbim to task about this comment on verse 2: [4]Note that this appears in the very first volume of the series, published in 1926. R. Kasher could have changed his view later in life but I am not aware of any evidence of this. “And what he [Malbim] brought from the consensus of recent scientists, for us Jews who uphold God’s Torah, the Jewish heritage, the words of the scientists that are built only on speculation do not have the ability to push aside the tradition of our Sages.” Rather, fire is either included in air (electricity and radiation) or in the word “choshekh.” R. Kasher continues: “I find it puzzling that the author of Ha-Torah Ve-Ha-Mitzvah [Malbim] accepted the words of the scientists who wrote that the approach [that fire is contained within air] is wrong–since he [Malbim] mentioned some of those ideas [that electricity is in the air]. Why didn’t he uphold the words of the Sages?”

R. Kasher’s criticism raises important points. First, in his view, science should not be used to reinterpret the Torah. He explains that scientific understandings change over time and are therefore unreliable. Furthermore, in this case the reinterpretation was unnecessary because the traditional approach remained viable, even if not optimal. Yet, Malbim did so, demonstrating a different threshold for biblical reinterpretation. In his commentary to Psalms (145:4), Malbim writes that as each generation continues to explore the universe, it gains understanding into its workings beyond previous generations. Form his comments discussed above, Malbim seems to imply that as scientific understandings change, so can our biblical understandings. [5]In his masterful article on the Malbim and science, Dr. David Berger also points to the comments on Gen. 1:25 and 3:1 (“Malbim’s Secular Knowledge and His Relationship to the Spirit of … Continue reading

I am not suggesting that the Malbim can serve as a precedent for contemporary commentators. Because his exegetical approach (halakhic, midrashic and omnisignificant) is unique, few readers today of the Bible will follow his lead. However, his innovation offers an important example. I mean this not only in the sense of creative reinterpretation but also the key prerequisite that Malbim possessed. He was immersed in the sea of the Talmud, deeply imbued with the spirit of the Sages. He was not dismissive of tradition but a part of it. While we lack scholars of Malbim’s strength today, we can understand the spirit that flows through his commentary and embrace it as we face today’s intellectual challenges. [6]Surprisingly, R. Moshe Meiselman (Chazal, Torah, Science, p. 270), in making the point that no Torah commentator explained the text in line with the Eternal Universe theory (prior to acceptance of … Continue reading
———