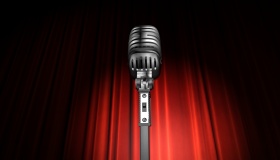 The question of stand-up comedy’s propriety comes from the same source as its benefits. Humor, we are told, is the best medicine. It relieves stress, spreads joy and serves as a break from our busy lives. At its best, it can also serve as social commentary and political criticism, sometimes sparking positive change. In theory, comedy can inspire teshuvah by highlighting religious inconsistency.

Crude comedy, which encompasses most of it, is surely improper. The forbidden language and sexual innuendo are the most obvious points of criticism. However, mockery and satire can be equally improper, denigrating people, institutions and beliefs. When everything is subject to mockery, nothing is sacred, not even that which is literally sacred. Faith falls to the side when mockery runs rampant. Tanach repeatedly attests to this. But what about comedy that lacks all of these elements? What about stand-up comedy with completely clean language that pokes fun without mocking or denigrating?

In an article in Jewish Action, R. Daniel Z. Feldman notes the existence of jokes within the Talmud and the statement that Rabbah would begin his lectures with a joke (Shabbos 30b). He goes further, quoting R. Joseph B. Soloveitchik as saying that humor reflects an appreciation of what is important in life and what is not. We must maintain perspective, laughing at the trivial and worrying about the serious.

On the other hand, too much of a good thing is bad. Life is serious. If we spend all our time in levity, if we immerse ourselves in leisure rather than dip our toes in it, we have deviated from the lifestyle required by the Torah. The Baraisa (Avos 6:5) states that one of the paths to acquiring Torah is “a little joking.” The Gemara (Sotah 25b) includes among those who do not receive the Divine Presence a group of mockers. On the citation of this passage in the Kitzur Shulchan Arukh (30:6), R. Shlomo Aviner (commentary, ad loc., vol. 1 p. 324) states that a little comedy is acceptable but not too much. Earlier (29:2, p. 308), he wrote his brief guideline for comedy: “a little with kosher content.” Here, he adds that a few (approximately 5 to 15) minutes of stand-up is fine. However, when people gather together for longer periods of stand-up comedy, they are engaging as a group in an extended waste of time. That is forbidden (see also 31:3, p. 328).

Some might argue that R. Aviner’s limit is arbitrary. Who defines how much is too much? I suspect he would agree. The key is the need for balance, the focus on a life devoted to God and man, enhanced with some lighthearted joy. Imbalance is the enemy of mental and religious health. Too much stand-up, no matter how pure, is still unkosher.