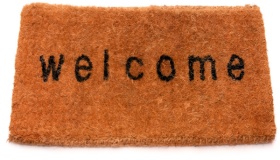 The big news in Washington is that Michelle Obama’ 50th birthday party is coming, and the invitations are out. But – get this – the DC gossip columns are all buzzing about a small sentence on the invite: “Eat before you come.” Jewish event? I think not. Now I’m not even upset that I’m not invited. Tacky? The debate is serious. Does it show fiscal responsibility that the White House is adjusting its belt, literally, in the shadow of the sequestration or is it just cheap?

Lizzie Post, great-great granddaughter of etiquette queen, Emily Post, didn’t care for it but not because it looked skimpy. “My advice to people would be not to put ‘eat before you come’ on an invite. And this is not a specific etiquette thing. To me it just sounds so instructive.” It’s bossy. We’ll eat if we want to, thank you very much.

Nothing could be more counter to a Jewish approach. As we read above, a host takes joy in watching his or her guests enjoy food, feeling privileged and blessed to fulfill the mitzva of bringing others around our table to break bread together and enjoy life’s bounty. In fact, in Jewish law, a host is supposed to serve and apportion food so that everyone gets more than what they might have taken on their own. Essen.

In the Talmud, the sage Rava was speaking to Rafram bar Papa, and said to him “Tell me some of the good deeds which Rabbi Huna has done.” Rafram replied: “Of his childhood I do not recollect anything, but of his old age I do. When he had a meal he would open the door wide and declare, ‘Whomever is in need let him come and eat,” [BT, Taanit 20b]. It’s a beautiful verbal transaction on so many levels. Instead of engaging in the usual legal debate, these two scholars want to discuss the kindnesses of a third. What sticks out in Rafram’s mind is the way in which Rabbi Huna opened his doors wide. His table was open because his heart was open. He lived in a state of perpetual generosity.

Naturally, Rabbi Huna learned this from somewhere, and chances are good that food generosity came to him – and us – as a legacy from Abraham in Genesis 18. Abraham was sitting at the threshold of his tent in the heat of the day, scouring the landscape for strangers. He sees three in the distance and rushes out to greet them. He offers much more than they expect. “‘Let me get you something to eat, so you can be refreshed and then go on your way–now that you have come to your servant.’ Very well,’ they answered, ‘do as you say.’ So Abraham hurried into the tent to Sarah. ‘Quick,’ he said, ‘get three seahs of fine flour and knead it and bake some bread.’ Then he ran to the herd and selected a choice, tender calf and gave it to a servant, who hurried to prepare it. He then brought some curds and milk and the calf that had been prepared, and set these before them. While they ate, he stood near them under a tree.”

Notice the way the text shares details of the meal. No skimping here. He rushes to get them the food but does not serve them drive-by style but with a formal multi-course and expensive feast. He does not eat with them but stands near them, an additional way he shows them that his aim is their comfort, not his own.

Hachnasat orkhim – welcoming strangers – is not a chore, a burden or the wasted expense of social capital. It is pure joy to serve others. If you ate before you arrived you would be denying your host this happiness. So don’t eat before you come. Eat after you show up. Show the White House how it’s done. And bring a serving of affection and generosity to your table.

2014-01-16
Erica Brown
Previous: Daily Reyd
Next: Embracing the Metaphysics in the First Mitzvot of the Torah

Dr. Erica Brown is a writer and educator who works as the scholar-in-residence for The Jewish Federation of Greater Washington and consults with for the Jewish Agency and other Jewish non-profits. She has published a number of books and writes a monthly column for The New York Jewish Week and the website Psychology Today, and a weekly column for JTA on Jewish leadership.