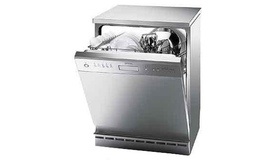 In this essay, we will discuss a common way of washing pots and dishes. Washing dishes nowadays is much different from the times of the Rishonim (see, for example, Tosafot Chullin 112a), who describe soaking dirty utensils in larger basins, heated over the fire. In modern kitchens, many wash their pots and dishes in dishwashers, which were made popular in the second half of the 20th century.

A dishwasher cleans dishes by spraying water throughout the machine, removing any food residue that was left on the dishes. Dishwashing detergent, which is placed in a special receptacle, is released and mixes with hot water, which circulates throughout the machine. The hot, soapy water breaks down the food residue, which is then pumped out of the machine. Pieces of food too large to be pumped out are caught by a filter, located at the bottom of the machine. Many dishwashers offer an optional pre-wash cycle, as well as the main wash cycle, and then a possible intermediate cycle, and a final rinse.

For a more detailed explanation of how a dishwasher operates, the following web pages (1 and 2) may be helpful.

Using Dishwashers for Both Meat and Dairy Consecutively:

The Status of the Dishwasher’s Walls

Contemporary authorities disagree regarding whether one may use the same dishwasher for both meat and dairy utensils, consecutively. They raise two concerns:

Theoretically, there are two sources of ta’am which may affect the dishwasher walls: the ta’am from the dishes themselves, and the food residue left on the dishes.

As for the ta’am from the dishes themselves, R. Moshe Feinstein (Iggerot Moshe YD 2:28) argues that it if the concern is ta’am that came from the dishes themselves, certainly that ta’am should be considered “nat bar nat” [secondary], and it would therefore not be able to render the walls of the dishwasher meat or dairy. Incidentally, this rationale applies only to kosher meat or dairy dishes; the taste emitted from non-kosher utensils always has the ability to affect another keli [utensil].

Regarding the concern that taste from meat or dairy food residue, left on the pots and dishes, may be absorbed into the dishwasher walls, the Poskim raise a number of issues.

First, some suggest that the food residue is nullified by shishim [sixty-fold volume] of water. This assumption is dependent upon the dishwasher, the type of cycle chosen, and the cleanliness of the dishes placed in the dishwasher. Older dishwashers, for example, were less likely to conserve water than newer ones, and would use between 10 – 15 gallons per load. Newer machines, especially American ENERGY STAR qualified dishwashers, made after August 2009, use no more than 5.8 gallons of water per load. It seems that in most dishwashers, the actual meat or dairy residue must be less than one third or one half of a cup in order to be considered “batel.” Meat residue refers to actual meat, and not necessarily to the quantity of soup or gravy. Many are careful to clean off their plates before placing them into the dishwasher, leaving very little meat or dairy residue. Similarly, if a “pre-wash” cycle is run, the cold water most likely removes most of the residue.

Second, some have raised a concern that in some dishwashers, pieces of meat are trapped by the filter. As the water drains, there may not be sixty parts of water left to nullify the remaining food particles. This may be a serious concern. However, since during the hot water cycle, dishwasher detergent is released, some assume that even after there are no longer enough water to “nullify” the meat, the detergent has “spoiled” (pogem) any remaining food particles, and therefore this concern does not seem relevant. Although the Acharonim (see Mechaber 95:4, Shakh and Taz) discuss whether soap may actually “spoil” food, dishwashing detergent, which is especially pungent, should certainly “spoil” as remaining meat or dairy remains in the filter.

This difference may be very significant to our discussion as one may argue that ta’am cannot be transferred in a keli sheni (Shulchan Arukh YD 105:2). Furthermore, the water sprayed by the revolving wand MAY be considered iruy [pouring] from a keli sheni, which is most likely halakhically insignificant. If, however, we view the dishwasher as a keli rishon, the food residue is actually cooking in the bottom of the dishwater, and ta’am is absorbed into its walls. If so, then the next time this dishwasher is used, it is equivalent to cooking meat in a dairy pot, which renders the entire machine and its contents basar be-chalav [meat mixed with dairy]!

My impression is that newer dishwasher models in America have built-in heating elements not only for the drying cycle, but also to insure that the water reaches and maintains the proper temperature, therefore rendering any of them a keli rishon as well.

Rav Moshe Feinstein, in numerous responsa (see, for example, OC 1:104, YD 2:28 – 29 and 3:10) argues that one may use the same dishwasher for meat and milk utensils, consecutively. He invokes the principle of bittul, and mentions that (American) dishwashers may be a keli sheni. More recently, R. Gideon Perl (Rav of Alon Shvut) and R. Yisrael Rosen (founder of director of the Tzomet institute of Torah and technology) debated this issue (see Techumin 11). While R. Perl accepted R. Moshe Feinstein’s ruling, R. Rosen challenged the assumptions mentioned above, including the reliance upon bittul, the ability of detergent to “spoil” food, and whether a dishwasher is truly a keli sheni.

2- Be’ein: Some suggest that if one washes dairy dishes, after washing dairy dishes, one may actually come to cook meat and meat together, violating the Biblical prohibition of “bishul basar be-chalav”! They fear that meat may have collected in the filter during the previous wash, and when one subsequently washes dirty dairy dishes, one may be cooking meat with milk.

This concern may be alleviated in different ways. First, one can clean the filter in between washes. Furthermore, some newer (higher end) dishwashers come with built in “garbage disposals” which dispose of all food washed away from the dishes. Finally, as we saw above, be-dia’avad one may assume that the food residue was batel be-shishim (nullified by sixty parts of water) and that the residue from the previous wash was spoiled (nifgam) by the detergent, and then unable to create basar be-chalav

Rav Moshe Feinstein, as cited above, ruled that one may use one dishwasher for meat and dairy dishwasher, washed consecutively. However, he (YD 2:24) adds that one should use separate racks for the meat and dairy cycles. He is apparently not concerned that the racks absorb taste of meat or milk, nor that the taste leaves the racks and is absorbed in the dishes. Rather, he expresses concern that there may meat or dairy residue left on the racks, which when sprayed with hot water, may then be absorbed into the dairy dishes. Some suggest that in newer dishwashers, the racks are generally clean after a full cycle, and that this added stringency, according to R. Feinstein’s rationale, is unnecessary. The silverware basket, however, often retains small pieces of food residue, and should be cleaned.

May one use a meat or dairy dishwasher for pareve dishes? If the filter (and racks) have been cleaned, there seems to be room to to allow washing pareve dishes alone (see The Laws of Kashrut by Rav Binyomin Forst, p. 262). Furthermore, there is room to allow washing pareve mixing bowls, used for cold ingredients, in either a meat or dairy dishwasher.

Washing Meat and Dairy Dishes TOGETHER in the Same Dishwasher

R. Ovadia Yosef (Yabi’a Omer YD 10:4; see also R. Yitzchak Yosef, his son and the new Rishon Le-Tzion, in his Otzar Dinim La-Isha ve-LaBat 30:15) rules that one may even use one dishwasher for meat and dairy dishes together, at the same time. He recommends, however, that one be “stringent” and wash them consecutively, “zeh achar zeh”.

Others argue that not only should this not be done, but, if both the meat and dairy utensils were “ben yomo”, and there was not enough water in the dishwasher to nullify the dishes by sixty (shishim), the water, dishes, and dishwasher may actually be rendered not kosher. If, however, the meat or dairy dishes were not used within the last 24 hours, or there was enough water to nullify the dishes by sixty, everything would be permitted (see R. Yitchak Ya’akov Fuchs’ “Ha-Kashrut”, pg. 56, based upon the Rema YD 92:1).

Although I do not recommend this practice le-chatchila, I believe that be-di’avad, one may be lenient, especially when the case involves questions of shlom bayit.

Silverware Found in the Wrong Dishwasher

What if one finds dairy silverware in a meat dishwasher, or vice versa?

The Rema (95:3) rules that if one finds a dairy spoon among meat cutlery, one need not be concerned that it was washed in a manner which would render it not kosher.

The Acharonim (see Taz 95:13 and others) point out that there are so many sefekot (doubts), one can assume that the dairy spoon was washed in a permissible way. For example, maybe the spoon wasn’t actually washed with the meat cutlery. Or, maybe the dishes were clean of residue and at least one of the types was eino ben yomo [over a day after last use]. Furthermore, we might add that maybe the water didn’t reach yad soledet bo [cooking temperature] (often people don’t wash dishes in water which is yad soledet bo, as it is very uncomfortable). Additionally, maybe there was shishim of water against the taste, or maybe the soap spoiled any taste that was present. In any case, we have clearly reached the “sefek sefeka” [double doubt] necessary to permit such a case.

Can one make the same assumption regarding a dairy spoon found in a meat dishwasher? Clearly, all the silverware was washed together. Furthermore, the water was clearly hot enough to enable a transfer of taste. One could possibly make an argument for leniency based upon the presence of shishim, as well as presence of detergent. Therefore, although the spoon is most likely permitted, there may be room in this case to kasher, when possible, the utensil in question.

The common custom, despite Rav Moshe Feinstein’s leniency, is not to use one dishwasher for washing meat and dairy dishes consecutively. Those who do permit this practice must accept the following assumptions:

1. The food residue, even if at times it is not spoiled, is nullified by shishim of water.

2. The detergent spoils the remaining food residue, even when there isn’t shishim of water in the machine.

Furthermore, those who use a dishwasher in America, in which the internal heating element does NOT heat the water, may have another reason to be lenient.

Rabbi David Brofsky is a senior faculty member at Midreshet Lindenbaum and writes a weekly halakha shiur for the Virtual Beit Midrash (VBM). He is the author of Hilchot Tefilla: A Comprehensive Guide to the Laws of Daily Prayer, and the recently published Hilkhot Moadim: Understanding the Jewish Festivals.