Can Educators Ride the Mercava Into the Future? 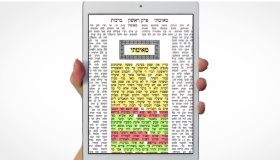 This paraphrase of a well-known Gemara in Horayot (14a) comes to mind when discussing the Mercava project. This new educational tool, promoted via YouTube, raises new learning possibilities by harnessing cutting edge technology and media savvy. But it also highlights the emphasis often placed on the wrong skills and exacerbates unique educational challenges of the twenty first century.

I had already seen the Mercava promotional video when Professor Yitzchok Levine submitted the link to the Lookjed Jewish educators’ discussion group that I moderate. Professor Levine wrote:

In my more than 45 years as an educator I have seen too many things that were supposedly going to revolutionize learning that led to naught. I am not saying that this will happen to this endeavor, but I am skeptical of all of these sorts of things. Let them prove me wrong.

There is good reason to be suspicious of products that present themselves as “the future of education.” In the course of the past 100 years, technological developments including radio, television and even LP records were presented as the wave of the future.
See, for example: here, here, here and here.

Many of the educators who responded to Professor Levine’s post expressed a distinct lack of comfort with the Mercava video. They explained their hesitation in a number of different ways, ranging from their previous experience with the unfulfilled promise of technology to the question of whether the experience of learning and teaching Jewish texts should be in the realm of computers rather than the mesorah of traditional Torah study. While all of those who commented viewed the introduction and implementation of technology in their classrooms as a given, they seemed reluctant to put their full faith in a well-produced YouTube video that was heavy on glitz and light on content.

The concern of these educators certainly has some merit. The closing few seconds of the video showed the range of people whose talents would need to be harnessed for this project to be successful. The list includes (I may have missed one or two):

It is not without reason that teachers might feel that the Mercava may be futuristic, but is weak on education. [1]For those of you who are interested in hearing the perspective of the educators who engaged in this discussion, the full conversation appears here: link.

One voice that believes that Mercava “might just be the future of Jewish education” is that of Tzvi Pittinsky, who was given a tour of Mercava and came away impressed. He blogged about this here: link

It is hard to know if this particular project is the future of Jewish education, but it is clear that Jewish education needs to move into the 21st Century. The features that I discerned in the course of the video – I found it odd that they are not clearly listed on their website – include:

Our students, as “digital natives,” fully anticipate that the texts that they use should contain many of these features. With technological advancement in every area of the general studies curriculum, it is disturbing to think that the only area in school that will still rely on texts that look like they were printed in the last century will be their Judaic studies classes. This is not an issue of radical change; it is merely enhanced access to the texts that we want our students to study.

The question becomes, what do we – and our students – do with these enhanced texts? If we assume that students no longer need to be proficient at word translation because there is always a translation available to them, and that they do not need library skills because they can “click though” to the next text that they need, what is the job of the teacher?

While it may appear at first glance that having texts readily available is a boon for learning, it presents several challenges, and the additional materials offered by the Mercava exacerbate those challenges further. The goal of education generally – and Jewish education specifically – is not merely the gathering of information. Inculcating ideas and values comes through effort and exertion. It is rare that we truly value something that we received with limited effort. But beyond the ready availability of texts, we must distinguish between support materials like maps that expand our understanding, and explanatory materials like translations and prepared videos that limit students to a given perspective. Prepared videos that present a single approach encourage shallow thinking and a skewed sense of mastery. The use of art or videos need not limit students’ ability to think and analyze. A good example of how art can expand students’ thinking can be seen at www.alhatorah.org.

A similar problem exists with real-time answers from teachers. Instant gratification does not encourage deep thinking. At the same time that we deal with a student population that has come to expect the answer to any question in the time that it takes to tweet and re-tweet, we need to educate them that patience is a virtue and that better answers are to be found with long-term reflection and analysis.

My son is doing graduate work in educational technology at Tel Aviv University and he has been interviewing leading religious educators in Israel about their concerns with technology and internet use. Somewhat surprisingly, they do not express fear that their students are becoming addicted to gaming or pornography. Their concern is that young people are losing their innate abilities to interact with their communities and their peers in a healthy way, and that they are being encouraged to think superficially.

These realities create new challenges for Jewish studies teachers, who will need to learn to become expert in blended learning, that is, communities in which teachers and students interact both online and in person, taking advantage of the resources now available to us and mentoring students to become thoughtful, creative, committed members of the Jewish community.

In a world where information is readily accessible to all – where everyone “owns the wheat” – the future of education has to be taking students beyond that information. Teachers will no longer be purveyors of information; their calling will become ensuring that their students do not settle for superficial collection of information, but become adept at thoughtful analysis, deep understanding and sincere application.

It is a challenge that committed Jewish educators should embrace.

Rabbi Shalom Z. Berger, Ed.D. is Director of E*Communities at the Lookstein Center for Jewish Education where he moderates the Lookjed list. He also serves as Senior Content Editor for the Koren Talmud Bavli. He is currently developing a Flipped Classroom Teacher's Guide for that work.