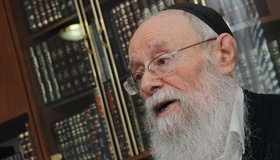 A talmid muvhak of both Rav Moshe Feinstein and Rav Isser Zalman Meltzer, influenced by his close relationship with Rav Elazar Schach, Rabbi Greenblatt was the author of the ten volume set of halachic responsa the Rivevos Ephraim and the two-volume Rivevos Ephraim al Hatorah. He was a remnant of a different era, a talmid chacham of almost unparalleled depth and breadth, who could regale you for hours with stories and conversations he had had with gedolim of the previous generations. Over the years that I was privileged to learn with him, he would sprinkle them in periodically, filling in a gap with an anecdote or answering a question with a short laugh and a story about how just such a maaseh had occurred with one of his rebbeim. He would bring the text to glorious life as a real teacher should. Rabbi Greenblatt remains a link in the mesorah and a man whose scholarly likeness we may not see again for a very long time.

Rabbi Greenblatt grew up learning Torah in Eretz Yisrael, and only left for America at age nineteen so that he could send back money to support his parents and nine siblings. Before he made the trip he received blessings from several gedolim, including Rav Schach, Rav Isser Zalman Meltzer, and the Chazon Ish. Rav Isser Zalman told him that he would merit to return to Eretz Yisrael one day, after having done great things for the people in America. When he got to New York, he spent a couple of years learning closely with Rav Moshe Feinstein, before Rav Moshe sent him to Memphis so that he could make that community bloom. Rabbi Greenblatt was initially hesitant to go, but with Rav Moshe’s encouragement he agreed. He opened a Sunday school, then a yeshiva; he led tefillah, did schechita, milah, gave shiurim at all levels, and completely transformed a city, producing thousands of talmidim in the process. He accepted his duty in life like a soldier committed to fulfilling his mission. He was unable to attend Rav Moshe’s funeral because there was no one else he could find to read Megillah for his kehilla. When he lost all of his money to Madoff, he held off on telling people for as long as he could so that he would not become a burden. He acknowledged his fortune as part of God’s ultimate plan, and saw the tragedy as a chance to fulfill Rav Isser Zalman’s bracha and return to Israel. He spent his last few years happily teaching and learning with chavrusas from all over the world, in person and on the phone.

Encyclopedic in his knowledge, he was also firm in his principles and rulings. When I was studying with him for semicha, Rabbi Greenblatt emphasized the importance of always making sure to stay true to God and never fearing repercussions. He once walked out of a shul position on Motzei Yom Kippur, right after neilah, because he felt that the community was willing to compromise halacha for financial considerations.

In a world of constantly falling heroes Rabbi Greenblatt was a man of untouched purity and uncompromised holiness, the epitome of what every Rav should be.

Rabbi Greenblatt was a man whom people trusted. Calls would come in from all over the world, and people would ask his advice on the most personal decisions. Some would give their names; others would talk to him all the time and yet remain anonymous. He never pushed, and never let a person feel that he was being judged. In an incredibly impressive and understated feat he had connections and was respected across almost every line and divide, from secular to religious, from young to old, from Reform to Orthodox, from novice to sage. When the Israeli government needed someone to monitor certain shechita factories in America, they called him. When the gedolim of Eretz Yisrael were debating where to place the mezuzah on the gate of Shaar Yaffo, they called him. And when countless thousands of others needed help or guidance, they called him. He was very down to earth in his approach, and always made sure to speak to people at whatever level they were on. He was not a fan of segulos or cheap fixes; he preferred that people work hard and try to better themselves in service of Heaven. I remember him once saying that all of the segulos in the world were not equivalent to the zechus of simply learning one Tosafos. He was a leader and a manhig of his community and a wide swath of the Jewish world.

What made Rabbi Ephraim Greenblatt so special was his personality and mindset, his sense of humble servitude. Kind and gentle, he was always smiling, and always willing to give of his time and energy for others. Walking into the little Memphis house he lived in for 58 years before he returned to his native Israel four years ago, surrounded by his beloved library of 26,000 seforim, you were immediately able to sense that this was a man who never had a minute to himself. You were just as likely to see him learning alef-beis with a newly interested baal teshuva he had recently met in shul as you were to see him conversing with a gadol from Eretz Yisrael about a complex halachic matter of significant communal weight. There would be multiple phones ringing, a revolving doorway of people who had appointments to learn, and faxes coming in constantly from Jews from every walk of life hoping to get his opinion on some matter and knowing that for at least a few moments, they would get his undivided attention. And in the center of it all was Rabbi Greenblatt, sitting at his little desk, smiling. At any given moment he was probably writing two or three teshuvos (always in duplicate–one for the recipient and one for himself, a trick he learned from Rav Moshe to make sure that he always thought through issues at least twice), answering a question after gently assuring the next caller that he would be right with them. He would help everyone, calmly, one after another, in a never-ending series of emotional investments. Pastorally, he had an incredible bedside manner; warm and reassuring, you knew that he was authoritative and authentic, that he was speaking truth and that he really cared. Many appreciated who they were talking to, but still more did not even know that they were dealing with a gadol; he was just the nice man who had offered to spend some time with them teaching them to read, or the rabbi that a religious friend had recommended they call out of the blue for some advice.

Rabbi Greenblatt once confided in me that one of his favorite times of week was Friday night, because that was the only time he really had a chance to sit and learn. He would stay up late into the morning hours, going through literally three or four seforim in one night. He was never interested in fame or fortune, never sought additional leadership positions that might accord him honor. He was the living, breathing fulfillment of the Gemara in Horayos 10a, which gives Rabbi Gamliel’s description of the rabbinate. “Do you think I am offering you power? I am offering you servitude!’ Happy and content to serve his people and his God, Rabbi Greenblatt was an eved Hashem in the truest sense of the word. Thousands of people across the globe are mourning the loss of their teacher; thousands more don’t even realize that the rabbi their own rabbi turned to in times of distress or doubt is gone.

Rabbi Greenblatt will be sorely missed by the people he served his entire life. Yehi zichro baruch.

Rabbi Dr. Moshe Goldfeder is Senior Lecturer at Emory Law School. He was a talmid of Rabbi Greenblatt.