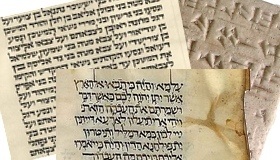 Essay VII: The Idea of Law in the Tanakh vs. The Idea of Law Today[1. Portions of this essay have appeared previously in my essay What Is This Thing Called Law? The Jewish legal tradition and its discontents]

In the previous essay I delineated a critical distinction between two ways of thinking about law: as common law and as statutory law. I further showed that whereas most modern people think of law as statutory law, law in the ancient Near East was universally thought of and composed as common-law.

What can this distinction tell us about the nature of law in the Tanakh generally and in the Torah specifically? To my mind, it can tell us a whole lot, especially when we see the same law presented in highly divergent ways. The conclusions that I will draw abut how law functioned in the time of the Tanakh may surprise some. Following my main presentation, therefore, I will turn to remarks by the Netsi”v about the development of halakhah that support these conclusions.

I. Law in the Tanakh: Common Law not Statutory Law

Our earlier distinction between common law and statutory law throws great light upon what we call “law” in the Torah. Intuitively we read the legal portions of the Torah through the lens of statutory law. Yet, law in the Tanakh follows a common-law conception of how law and legal writing work, as does ancient Near Eastern law generally. This explains why nowhere does the Tanakh instruct judges to consult written sources.[2. Cf. Shemot 18:13-26; Devarim 1:16-17; 16:19-20; Divrei Hayamim II 19:4-7.] Narratives of adjudication, such as Solomon’s “split the baby” trial (Melakhim I 3), likewise make no reference to written sources of law. No single collection of Torah “laws,” such as the Book of the Covenant in Shemot 21-23 or the “laws” of Sefer Devarim (chs. 12-26), displays an attempt to provide a comprehensive set of rules to be applied in judicial cases. Here, as in the Code of Hammurabi, critical aspects of daily life receive no legal attention. The Torah clearly endorses and sanctifies the institution of marriage. Yet, if you want to marry a woman—just what do you have to do, ritually or contractually? The Torah nowhere says. That would be unthinkable in a work of statutory law. Biblical “law” is not “law” at all—in the sense of statutory law.

Let’s look at two examples of how law in the Bible is negotiated through a common-law mentality. Recall the parable of the poor man’s ewe in Shmuel Bet 12:1-4. David has slept with Batsheva, the wife of Uriah, one of his soldiers on the battlefront. The prophet Natan wishes to bring the errant king to an awareness of his misdoing. He brings a fictitious case to the king for adjudication in which a man blessed with large flocks steals and slaughters the ewe of his neighbor, a poor man who owned nothing but the ewe, which he loved very much. The king does not realize that the parable is a metaphor for his own lust for women. Significant for our purposes here is the punishment that David imposes upon the thief. What should be the ruling here? If Torah law is statutory law, then the answer is simple: David had no need to look farther than Shemot 21:37: “If a man steals an ox or a sheep and slaughters it or sells it, he shall pay five oxen for the ox and four sheep for the sheep.” David, however, deviates from this ostensible “statute.” He indeed obligates the thief to four-fold restitution—as per the “law” in Shemot—but, also sentences him to death (Shmuel Bet 12:5-6)! From a statutory perspective, David’s actions are out of line. A cardinal tenet of statutory law is the principle of strict construction—interpreting the law as literally as possible. If Sefer Shemot calls for four-fold restitution and no more, then no harsher sentence may be leveled.

Torah “law,” however, is not statutory law; it’s common law, which is to say situational and ad hoc. When Sefer Shemot proposes that a thief that slaughters a stolen sheep should pay four-fold restitution, that is not a prescriptive, statutory law. It is, rather, an example of justice. In most instances that a man steals a sheep and slaughters it, he does so because he lacks means and wishes to provide for his family. It is relatively easy to pilfer a sheep from the pasture, and so the Torah prescribes a harsh financial penalty. David, clearly aware of the proposition in Shemot 21:37, applies that teaching to the specifics of the case at hand. In the case brought to him by the prophet, the thief’s actions are flagrant and contemptible in the extreme. The thief here was neither hungry nor desperate. The aggrieved—the poor man—was denied his only, beloved possession. The prescription of Sefer Shemot would simply not do here. The thief’s avarice and callousness warrant his death. From the anachronistic perspective of statutory jurisprudence, the law in Shemot is plain and literal. Going beyond the letter of the ostensible “statute,” David performs a miscarriage of justice, even as he cites the proposition. However, from the perspective of common-law jurisprudence David utilizes the case in Shemot as “a datum from which to reason” and applies justice to the specifics at hand in front of him.

The idea that divine law can be as malleable as human law is counter-intuitive to some. It is one thing to posit that laws of human origin evolve in a common-law fashion. Humans are fallible and limited in their perspective. But surely divine law is different. God’s wisdom is infinite and thus His laws cannot be altered. This intuition, however, misunderstands common-law thinking. The fluid nature of the common-law stems only partially from the limitations of the human jurist. The common law insists on fluidity because society itself is in constant flux as well. Even divine law requires adaptation to the changing needs of society.

This view of biblical law as common-law is substantiated when we examine how law is approached broadly across the Tanakh. Laws in the Tanakh do not assume a single, immutable form. Rather, the basic institution undergoes restatement and receives new expression across the ages. This is seen with regard to the laws of Shabbat, Pesach, yibum (levirate marriage) and many other commandments. Just consider a well-known example: levirate marriage (yibum) in Megillat Rut. The prescription in Devarim 25:5-12 speaks solely of the obligation of a brother-in-law to his deceased brother’s widow. Rut, however, insists that Boaz has an obligation to marry her, (3:9), even though Boaz was but a distant cousin of her deceased husband. Boaz, in turn, reveals that there is an obligation to redeem the land of the deceased, when a man performs yibum (4:5-6). This is nowhere hinted at in the laws of land-redemption in Vayikra 25, nor in the laws of yibum in Devarim 25. What Megillat Rut shows us is a common-law reapplication of the institutions of yibum and land redemption, as they were practiced in Boaz’s time. The manifestations of these mitzvot in his time were different from what the Torah had originally specified, and differed also from the halakhah that Chaza”l would spell out on these matters.

The prophets of Israel censured Israel for many failings: theft, murder, idolatry. Nowhere do the prophets “throw the book” at the people with the claim that they were performing the law, but doing so in the wrong fashion, by failing to adhere to a strict reading of a passage. Modern statutory jurisprudence mandates that judges adhere to the exact words of the code because the code by definition is autonomous and exhaustive. As we have seen, however, the ancient Near East knew no notion of statutory law. Hence, when Boaz performed a form of yibum that varies from a strict reading of Devarim 25:5-10, no one thought that he was contravening that passage. That passage was an example of proper practice, reapplied anew in every generation. I have presented here a fluid notion of legal practice—certainly more fluid than we find in Talmudic writings, and much more fluid than we find in normative halakhah today. Yet some of the greatest rabbinic figures envisioned that once upon a time law did evolve much more fluidly than it does today. I conclude with an example of one such voice: the Netzi”v.

II. The Changing Nature of Halakhah in the thought of the Netzi”v

In his important work, How Do We Know This?, Jay Harris reveals that the rabbinic tradition had always been of two voices concerning the continuity of the halakhah. One voice is more familiar to most Orthodox Jews today and claims continuity of tradition: little has changed, and much of the mesorah can be traced all the way back to Sinai. A flagship source for this opinion in the tradition is the statement in Berachot 5a that Mikra, Mishnah and Talmud were all given to Moshe at Sinai. At the opposite end of the spectrum, Harris notes, one can cite the aggadah in Menachot 29b that when Moses sat and witnessed R. Akiva teaching a halakhah to his students he was dismayed that he did not recognize the law that R. Akiva was teaching, and was heartened only when R. Akiva explained that this law was, in fact, halakhah le-Moshe Mi-Sinai. The suggestion is that even Moshe himself might not have been familiar with the laws later granted status of halakhah le-Moshe Mi-Sinai. The issue here is not which approach to halakhah is historically correct, or even which is theologically correct. It is certainly that case that the former position has wider in currency in our day. But the latter position is well-represented in the sources.

In particular, I’d like to bring attention to comments of the Netzi”v about the changing nature of halakhah and the oral law. Consider his comments to Devarim 5:1:

Elsewhere (Vayikra 25:18), the Netzi”v underscores that the ongoing process of deducing rules of interpretation, and deriving through them actual laws throughout history. He notes that Hillel the Elder had his seven rules in his generation (Tosefta Sanhedrin 7:5) and later R. Yishmael derived his thirteen. The Netzi”v’s approach raises many fascinating questions: just what were the rules of interpretation in each generation prior to the rabbinic period? Who was it that was empowered to derive these rules? Why did this process of identifying new rules of interpretation slow down, or cease altogether? Why do we seem to have little record of this activity as part of the mesorah? While all of these are worthy questions, they are not my concern here.[4. See Netzi”v’s introduction to his commentary on She’eiltot for his lengthy treatment of this topic.] Instead, I wish to draw several conclusions about the Netzi”v’s thinking:

The Netzi”v nowhere uses the language of common law vs. statutory law, as I have here. Yet his notion of the changing nature of the rules of interpretation suggests that the Torah, in his opinion, was not a statutory code. From here we move to our fourth and final essay of this series and address our primary question: why do laws in the Torah seem to contradict each other?

The next installment of this series will appear Tuesday morning, December 11th.
———

Joshua Berman is a professor of Tanakh at Bar-Ilan University. He learned at Yeshivat Har-Etzion and has semikhah from the Israeli Chief Rabbinate. Among his books are The Temple: Its Symbolism and Meaning Then and Now (repr. Wipf & Stock, 2010) and Created Equal: How the Bible Broke with Ancient Political Thought (Oxford, 2008), a National Jewish Book Award Finalist in Scholarship.