Isaac Leeser: The Right Man at the Wrong Time

Posted by: Aharon Rakeffet-Rothkoff in History of Torah in America, Journal Dec 25, 13 2 Comments 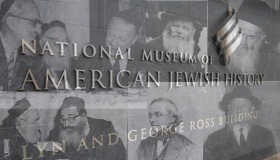 Isaac Leeser (1806-1868) was a visionary, ahead of his time… to his frustration. The ultimate mazal is to be the right man in the right place at the right time. Whatever Leeser tried to do failed but eventually became standard. Sadly, he was at the wrong time but years later he was proven correct. 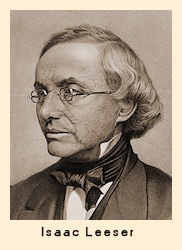 Leeser was born in Germany and orphaned at a young age. He received a good Torah education but was impoverished. His uncle brought him to Richmond, VA at age 18. He never married and often came into conflict with congregants, but enjoyed a long rabbinic career, even though he was never ordained as a rabbi. In Richmond, he was appointed Chazzan in the Sephardic synagogue, a rabbi-like position that required a man of Torah learning, something rare in America at that time. He had small pox in 1834 and his brother cared for him, eventually dying from the disease he caught from Isaac. This greatly impacted on Leeser, who reportedly carried a tinge of sadness with him all his life—never marrying, losing his brother and endlessly arguing with congregants.

Leeser was invited to become Chazzan in the prestigious Congregation Mikveh Israel in Philadelphia. However he left after a dispute with community leaders. A synagogue member was put in cherem, excommunication, by lay leaders of the community for reasons we do not know for certain but seem to be due to fighting with synagogue elders. Leeser was told to announce this cherem from the pulpit on three successive Shabbatot but he refused to do so. He was censured by synagogue leaders, who cut his salary in half as punishment. His supporters broke away in 1857 and founded a synagogue for him, Beth El Emeth, where he served for the rest of his life. As we will see, he was what we would call today an Orthodox rabbi, fighting for tradition when Reform was just starting. In return, many felt he was too “frum,” as we say today, too inflexible for the modern world.

Some scholarship has been written about Leeser. In my opinion, the best article is by Moses Isaacs and Nancy Klein in Guardians of Our Heritage, a volume R. Leo Jung edited. We will also discuss a study by a Conservative scholar, Moshe Davis, who in his book The Emergence of Conservative Judaism argues that Leeser was a forerunner of the Conservative movement. We will discuss why he is incorrect.

One of Leeser’s most important contributions was a monthly newsletter, The Occident, in which he eloquently and forcefully argued for tradition. The very title, Occident, implies a new world in contradistinction to what was left behind in Europe. I believe he was influenced by R. Samson Raphael Hirsch, who also published a newsletter, Yeshurun, in which he reached out to the common people. Both Hirsch and Leeser recognized and utilized the power of the written word to strengthen tradition. R. Hirsch’s articles showed an openness to general knowledge and literature. Similarly, Leeser exhibited a worldliness in The Occident.

Leeser was the forerunner of Artscroll, Koren and all the successful Orthodox publishers

He fought many of the battles that we take for granted today. In particular, he vigorously opposed any changes in synagogue practice. It may seem surprising at first, but Leeser was in favor, at least in concept, of what was called “Minhag America.” He wanted a single nusach, prayer text, in America rather than allowing congregants to choose Nusach Sefard or Ashkenaz. He argued that if this is up to choice, there is no end to what will be decided by majority vote. If Isaac Mayer Wise’s “Minhag America” had been consistent with halacha, Leeser would have supported it.

Leeser also fought the long-standing battle for synagogue decorum. Christians attend short services and are quiet during the prayers. In contrast, Jews talked and acted disrespectful during the long prayer services. Leeser wrote in The Occident:

We regretted to observe in the place we attended that many spent the Kippur day in running in and out. I must pointedly condemn the practice of rounds of visits to various places of worship on that solemn day for such intrusion disturbs the devotion.

Time and again, Leeser raised the issue of lack of decorum and asked what can be done about it.

At that time, kosher supervision was not as significant a concern as it is today because food was largely homemade. It only revolved around issues like shechitah and matzah. But supervision of holy objects (tefillin/mezuzah) was a problem. Many salesmen made false claims about their merchandise’s origins. Leeser cried out about this problem. He accomplished little but foresaw a world in which standards and supervision were available, as they are today. 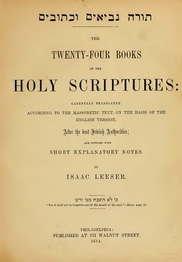 However, Lesser also had an innovative side that caused some to claim he was a precursor to the Conservative movement. Moshe Davis makes this argument at length and I will cite some of his examples. He points out that Leeser retranslated the King James Version as the Jewish Bible, changing the Christian interpretations but keeping the core translation. In fact, all English translations followed this approach and were based on the King James Version until the new JPS translation in the 1960’s. The Leeser Bible was extremely popular. I remember that it used to be in every shul as the standard Jewish Bible. After his death, Leeser’s publishing enterprise became the Jewish Publication Society, which still operates today. He was the forerunner of Artscroll, Koren and all the successful Orthodox publishers.

Leeser did not regard Reform as a separate movement

Leeser preached in English, which was a radical move. To my knowledge, he was the first Orthodox rabbi in America to break with European tradition and preach in English. It is interesting that his English is very Germanic, with long and complex sentences, but still the language of America. Once he started, other Orthodox rabbis followed suit. Leeser also believed in speaking to women, inspiring them, caring for their religious well-being. He wrote in The Occident:

The females, too, belong to Israel. And they also must be taught that they may understand and observe the law…. There is so much given to women, especially the women of Israel, that we may freely say with a great writer of modern days whose name we do not remember, ‘that we are always what women make us.’ When the child first begins to think, it is his mother who infuses in his mind the first ideas. It is his mother who teaches him to lisp the first words. If he is able to learn something of God, it is his mother again who instructs him to serve the great Being who is the creator of all.

Isaac Leeser was the inspiration for women’s prayer books published in Philadelphia, what we call today “techinot.” These are all now common activities among the Orthodox.

One of the most complex issues of the modern era, one that particularly vexed the Orthodox rabbinate in the twentieth century, is relations with non-Orthodox Jews and particularly the non-Orthodox rabbinate. The 1956 dispute over the Synagogue Council of America, which included synagogues and rabbis from all the movements, still resonated decades later. Leeser felt that there was no such thing as Reform Judaism, which at that time lacked any institutions and was more of a sentiment and mindset. To Leeser, Reform was a symptom of lack of knowledge, which can be resolved with education. Those of us who engage in outreach know that he was not entirely mistaken about this.

In the 1860’s, Leeser opened Maimonides College, the first American rabbinical school. At that time, all the clergy were imported from Germany, Hungary, and a handful from Eastern Europe. The 1870’s and 1880’s was different, when Eastern European Jews came to America in large numbers. But no one could predict that in the 1860’s. Maimonides College never succeeded. It had a handful of students and lasted only five or six years. It never got off the ground because the base was not there. The Reform movement began its rabbinical school in the 1870’s, JTS started in the 1880’s but in the 1860’s there was not enough interest in a rabbinical school. Surprisingly, Maimonides College joined forces with Reform. Leeser did not regard them as a separate movement. He said, “We should not hate our reformer brothers for their opinions since we should tolerate the sinner though we detest the sin.” Although, at that time, Reform was less extreme. Isaac Mayer Wise claimed to never leave his home in the morning without studying a page of Gemara. He even threatened to sue Leeser for calling him a “mechallel Shabbos,” a Sabbath desecrator.

In 1855, there was a conference on establishing a “Minhag America” which Leeser attended. As we explained, Leeser favored a unified and established prayer text. He hoped that Reform would compromise and they could all agree on a siddur for the sake of unity. But there was a limit to how much Reform would compromise—such as references to sacrifices and the return to the Land of Israel—and the experiment failed. He thought they all could agree on basic ideas but he was naïve. Around that time, Reform declared the second day of Yom Tov optional. Leeser tells the story that Isaac Mayer Wise got upset when people did not come to his Temple for even the first day of Sukkot in 1855. Leeser responded triumphantly that when you abolish the second day of Yom Tov, people will not respect the first day either.

In his time, Leeser was known as a right-winger who refused to compromise on various synagogue issues, such as use of an organ and mixed seating. However, as mentioned, some later historians claimed he was a precursor of the Conservative movement. The term “Conservative” did not come into use until the mid 1910’s. JTS began in the 1880’s but did not call itself Orthodox for fundraising reasons. It used words like “tradition” and “commitment,” and differentiated itself from Hebrew Union College. As JTS developed, it became attached to Historical Judaism. The nineteenth century European scholars of Historical Judaism were personally observant but viewed the Oral Torah as a gradual moral development (e.g. Professors Frankel and Graetz).

The Jewish Encyclopedia, Universal Encyclopedia and his biographer, Moshe Davis, all attribute this affiliation to Leeser. But this is unfair. He was the first traditional rabbi with vision, with dreams, who saw what the world needed. He started a yeshiva, published English translations and attempted to make Torah accessible to all. He demanded synagogue decorum and acted to establish kosher standards. Every one of his dreams eventually came true. If he could only see what has become of Philadelphia, New York, Baltimore and elsewhere, how the Torah thrives on the American scene.

This essay was adapted from the audio by R. Gil Student and reviewed by Rav Rakeffet.

Rabbi Dr. Aharon Rakeffet-Rothkoff is a Rosh Yeshiva at Yeshiva University's Gruss Institute in Jerusalem. He has published a number of books, mostly recently his scholarly memoirs, From Washington Avenue to Washington Street. This series of essays are adapted from R. Rakeffet's 2012-2013 lectures on the subject.