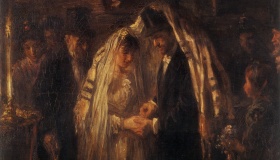 There is an ancient custom for a bride and groom to fast on their wedding day.[1. Rema E.H. 61:1, Rema O.C. 573:1, Kitzur Shulchan Aruch 146:1] There are many reasons cited for this custom, some practical, and others more spiritual in nature. For example, one of the explanations offered for the fast is to ensure that the groom does not become drunk in the course of the pre- wedding ceremony celebrations.[2. Beit Shmuel E.H. 61:6] Not only is an intoxicated groom unbecoming, but it also calls into question the legitimacy of the entire ceremony.[3. Rambam Ishut 4:18. Likewise for a divorce, Rambam Gerushin 2:14] In the event that the groom was drunk during the ceremony, there would be grounds to suggest that he was not fully cognizant of what he was doing, which may render the ceremony invalid.[4. Magen Avraham 573]

In ancient times, when it was common for minors to marry, it was the father who would accept the betrothal ring on behalf of his daughter. In such a situation, the father would fast on behalf of his minor daughter.[5. Magen Avraham 573] In fact, there was once a custom, though no longer practiced, for a father to fast on the day of a child’s wedding.[6. Darkei Moshe O.C. 580, Sefer Haminhagim Chabad p.75]

One’s wedding day is also a day of atonement, similar to Yom Kippur, when all of one’s sins are forgiven.[7. Yerushalmi Bikkurim 3:3, Yevamot 63b] In fact, the mincha prayer recited by the bride and groom on their wedding day is similar to the prayers of Yom Kippur. As such, fasting on such an occasion is certainly in order. There is a well known teaching which compares a groom to a king in a number of ways.[8. Pirkei D’rabbi Eliezer 17] Among these similarities is the fact that a king is judged in Heaven each and every day just like a groom is judged on his wedding day.[9. Mahari Bruna 93]

There are a number of days on the calendar on which fasting is forbidden, such as Chanuka and Rosh Chodesh. In the event that one is to be married on one of these days, the requirement to fast is waived. In such a situation, some authorities recommend fasting the day before one’s wedding or on another day as close to the wedding as possible.[12. Likutei Sichos, Vol. XXIV, p. 464] Some authorities advise forgoing the fast when getting married on any day thath Tachanun is not recited.[13. V’shav V’rapeh 2:84] There are also communities where it is customary that the bride does not fast on her wedding day.[14. Matteh Moshe 3:2, Likutei Maharich 3:130, cited in Made in Heaven by Rabbi Aryeh Kaplan]

There are a number of other reasons for fasting on one’s wedding day, as well. Some authorities suggest that fasting on one’s wedding day is a segula for Divine assistance in dealing with any feuds which may arise between the two families – especially when financial matters are involved.[15. Shabbat 130b, Mahari Bruna 93] It is also a viewed as a segula which has the power to ward off potential arguments that the couple might otherwise have throughout their marriage.[16. Mahari Bruna 93] The fast is also cited as a sign of respect and reverence for marriage.[17. Cited in Bishvilei Haparasha p.42-43] Indeed, doing so is consistent with an ancient custom to fast prior to performing any mitzva that is both beloved and infrequent.[18. Minhag Yisrael Torah 61:9] Abstaining from food on one’s wedding day also serves to symbolize that one’s primary purpose in marriage are the spiritual benefits and not the physical or material ones. [19. Rabbi Aryeh Kaplan in Made in Heaven]

It is a matter of dispute whether or not one who marries early in the day is required to continue to fast until nightfall just as when all other fast days customarily conclude. According to the opinion that the fast is because one’s wedding day is a personal day of atonement, it would seem that the fast should be continued until nightfall.[20. Bach 562, Beit Shmuel E.H. 61, cited in Bishvilei Haparahsa p.44] However, according to the view that the fast is intended to ensure that the groom is not intoxicated under the chuppa, there would be no reason to continue fasting following the ceremony.[21. Rema O.C. 562:2]

It is also suggested that the wedding ceremony concludes the atonement element of the day, at which time the Yom Tov nature of the day begins. As such, breaking the fast following the ceremony is most appropriate.[22. Chachmat Adam 129:2] Common custom is to conclude the fast at nightfall or after the ceremony, whichever comes first. In the event that the ceremony will not be held until quite some time after nightfall, the bride and groom must be careful not to consume any alcoholic beverages.[23. Chachmat Adam 129:2, Sefer Haminhagim Chabad p.75, Kitzur Shulchan Aruch 146:1] Fasting on one’s wedding day is not observed by all communities and, in fact, there are many Sefardic communities that don’t have such a custom.[24. Magen Avraham 559] In other communities, the fast is optional.[25. Ben Ish Chai;Shoftim 13] ——–