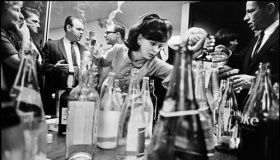 Editor’s note: Recent trends in Jewish life highlight the very real problems of intermarriage, assimilation, massive loss of Jewish identity, and the very survival of Jews and our communities as an endangered minority in an open society. This raises the question of how to remain separate, numerically viable, and strongly committed to Jewish life and traditional values. Historically the halacha has utilized various principles in dealing with this challenge. The following essay examines one such principle in a contemporary context.

In the previous installment, we discussed under what conditions it is permissible to drink liquor or other beverages with nochrim. A full presentation of these laws, however, requires us to analyze another issue – that of attending parties with nochrim.

The Talmud2 writes that the Jews who live in the Diaspora worship idols in purity. The Talmud explains that this means that when nochrim make personal celebrations, such as weddings for their children, the Jews’ attendance is like the eating of idolatrous sacrifices. This is true even if they bring their own food. The Talmud justifies this with a verse:“Lest you make a covenant with the inhabitants of the land, and they prostitute themselves to their gods and sacrifice to their gods, and one of them invites you and you eat of his sacrifice” (Ex. 34:15). From the end of the verse, Chazal derive that accepting an invitation of a nochri is equivalent to eating of his sacrifices. Chazal rule strikingly that one violates from the moment one is invited (and presumably accepts).

In addition to this legal passage, there are many aggadic pieces that stress how problematic it is to attend nochri parties. It is cited as the reason the Jews in the time of Mordechai and Ester deserved to die4 and as a reason for exile.5 However, we will not focus on those texts.

B. Idolatry or Chatnut, Biblical or Rabbinic?

To assess the nature of this prohibition, we will start backwards and show some of the problems arise methodologically. The Drisha6 wonders whether the prohibition can be waived on the basis of eivah. He references the dispensations that are granted to do business with nochrim even near their holidays, which are justified as they prevent offending the nochri,7 and wonders whether they apply in this circumstance.

Taz8 presents a withering critique of Drisha. He argues that eivah can be used to waive the prohibitions regarding business because those were rabbinic decrees enacted to prevent association with idolatry. This law, however, he argues on the basis of the context of the verse cited, was meant to create enmity. The verse warns that one should not make a pact (pen tichrot berit) with the nochrim. If this is the case, a concern of offending nochrim is irrelevant – that is the point! He also seems to imply that the prohibition is biblical, which would not make it subject to the exception of eivah.9

Shach10 counters that the prohibition is rabbinic, and was instituted to prevent associating with idolatry. As Rashi notes, the concern is that the nochri may thank his idol that the Jew attended his party. Thus, he argues, the prohibition can be waived if it will severely offend the nochri.

However, relying on the Shach is difficult, because several Rishonim that neither he nor Taz cite explicitly reject his position. Raavad14 explicitly states that it is a biblical prohibition and Ritva15 goes further, arguing that because of this eivah cannot mitigate the prohibition. Ritva argues that if the nochri sends food to the Jew, there is only a rabbinic problem and that can be waived.

Furthermore, this position was known to other Achronim who ruled in accordance with it. Erech HaShulchan16 cites and rules like Ritva, Chida17 cites this piece and agrees, Yavin Daat18 cites Ritva and argues that the prohibition is rabbinic but still prohibited even when there is eivah, and Baer Hetev of Mahari Tiktin19 cites Taz approvingly. Considering this evidence, Rabbi Hershel Schachter told this author that he felt one should rule like Taz.20

It should be noted, however, that the Tzvi LeTzadik21 rules like Shach and claims Rashi does. Additionally, as we will see below, Rambam may agree somewhat as well. A similar position can also be derived from Meiri.22 However, Rashi is not conclusive, because regarding shechar he implies that there is a more general prohibition of going to parties due to concerns of chatnut. Rabbi Moshe Feinstein23 is lenient, and permits one to attend but only to drink a little – which he considers arai and therefore subject to the leniencies that are accepted in Shulchan Aruch about shechar. This position is also accepted by Kaf HaChaim.24

C. What Types of Parties?

Rabbi Moshe Feinstein29 argues that Rambam derived this expansion from the concept of chatnut itself. This position emerges as well from Kol Bo30 almost explicitly, as well as many of the Rishonim mentioned above who claim the shechar was prohibited so that Jews would not eat at the parties of nochrim. If that is the motivation for shechar, all parties must be prohibited. Tur31 and Beit Yosef both accept the position of Rambam. The Beit Yosef, however, assumed the source was some Beraita that he did not have, though we have provided some of the explanations for Rambam above that do not assume this.32 In Kesef Mishne,33 however, he assumes it is an expansion of the passage in Avodah Zara. Shulchan Aruch does not cite this prohibition, and only mentions the prohibition on formal parties such as weddings. While Pri Toar34 rules leniently, as does Aruch HaShulchan,35 arguing that if one brings all his food to the party, that will create enough of a distance and prevent chatnut, this is not accepted by many Achronim.

One could have challenged the extension of Rambam if one thought the prohibition was only because of idolatry,36 and only formal celebrations cause the idol-worshiper to serve his gods. This was how Rabbi Avraham Alkali understood Levush’s dispensation for regular social gatherings. However, if one though the passage in Avodah Zara was about chatnut, then one could still claim that even that prohibition is limited to parties that are formal and have invitations, as the Talmud implies the problem is partially because of the keriah. This position is taken by Rabbi Moshe HaKohen37 who attests to the widespread custom in Provence to be lenient on regular social gatherings. Meiri mentioned above also seems to confirm this custom in Provence.

One could suggest a middle position for Rambam. A formal party, which also has the potential problems of Avodah Zara (or for others, the biblical prohibition of vekara lecha) is prohibited even if the Jews are the majority or eat at separate tables38 – the very acceptance of the invitation to these events are problematic. Social gatherings, however, are permitted in the correct context – where the Jews are primary. Second, social gatherings are permitted if the Jews sit at separate tables, even if they are the minority. These distinctions are accepted by Rabbi Avraham Alakali39 and Pri Chadash.40 Furthermore, the former prohibition is likely not mitigated if one does not eat at the party, while the latter is.

Thus, nochri weddings would seem to be prohibited, even if it would cause offense, as they very acceptance of the invitation is problematic. Purely social gatherings would be subject to the qualifications above. However, if despite the complexities that arise with the position of Shach and assume it is the position of Rashi, one could permit even weddings if not attending would cause offense.

What category do office parties fall into? Rabbi Menashe Klein41 prohibits them based on Taz. Rabbi Hershel Schachter thought this should be the Halacha as well. He thought making an appearance if necessary might be less problematic (to receive a bonus, for example), but lingering would be more problematic. Rabbi J. David Bleich42 thought it depended on whether a formal invitation was sent out to the company or a sign was hung on the bulletin board – the former would be a problem while the latter would not.43

From the Beit Yosef,44 it seems that a party can be as small as two people. However, the Aruch HaShulchan45 rejects that, and it seems reasonable that two people would be a meeting and not a social gathering. As mentioned above, many Achronim permit in cases when the Jews and nochrim are at separate tables, at least in the case of social gatherings. If the party takes place in the house of a Jew, the consensus of posekim is to permit it. Rabbi Feinstein is explicit, and permits having parlor meetings with nochrim at Jewish houses, but forbids it at the nochri’s house. He discourages using a nochri hall for such a purpose as well.46

Rabbi Baruch Chaim Hirschfeld47 argues that attending for business purposes is permitted because it doesn’t fall under the original decree. The decree was meant to distance us socially, but work related meetings fall under a different category. This is stronger if one thinks the decree is rabbinic and not biblical, but in conjunction with other arguments, it may provide room for leniency.

Attending bars for social reasons is possibly prohibited and definitely discouraged. If one must, it should not be a regular activity, and one should prefer sitting at a table than a bar, and should refrain from having alcohol.

Formal parties, such as weddings, which require invitations, are problematic. While some believe that the prohibition can be waived because of eivah, this goes against what seems to have been mainstream in Rishonim. Nevertheless, there are several prominent poskim to rely on, such as Shach, Rabbi Moshe Feinstein, and Aruch HaShulchan. Sitting at separate tables possibly alleviates problems, and having your own food may also mitigate the problem.

Office parties have several other grounds for leniency. First, they may not be social gatherings at all, and even if they are, they may not be parallel to weddings and therefore not subject to the issur diorayta. Then, there may be reason to permit because of eivah. If one does not stay for a long time, it may be permitted on the basis of arai and akrai which are recorded in Shulchan Aruch. Not eating can also lessen the halachic issues.

These are issues that come up often and a close analysis of the sugyot suggests a more restrictive position than that taken by most people. Nevertheless, there are many grounds for leniency as well. This is not meant as final psak – but this should act lehaalot et hadavar al shulchan melachim.

Jonathan Ziring is pursuing an MA in Jewish philosophy and rabbinical ordination from YU. He has taught classes and lectured at many campuses, schools, and synagogues, most recently at the Columbia University Hillel. He has been a Tikvah fellow, a senior fellow at the Summer Beit Midrash of the Center for Modern Torah Leadership, a fellow in the Cardozo Center for Jewish Law, and a fellow in the Straus Center for Jewish Ideas and Western Thought.