Asara B’Tevet: When On A Friday 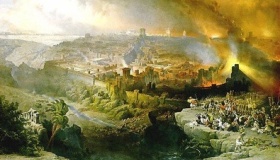 Asara B’tevet, the day that commemorates Nevuchadnezzar’s siege of Jerusalem,[1. See Melachim II:25; Yirmiyahu 52:4; Yechezkel 24:1,2.] is the only fast that can occur on a Friday.[2. Abudraham, Ta’anit; Magen Avraham 550:4; Aruch Hashulchan, OC 550:2; Mishna Berura 550:10.] This is quite significant and demonstrates that although it is a “minor fast day” its status is distinct from among all the other “minor fast days”. In fact, if Asara B’tevet were to occur on a Shabbat (though nowadays this is not possible due to the way the current calendar was established)[3. Magen Avraham 550:4,5.] it would be observed on that day, as well, earning itself a standing similar to Yom Kippur.[4. Abudraham. See Rambam, Hilchot Ta’anit 5:5 and Beit Yosef, OC 550 for a dissenting opinion.] The reason that Asara B’tevet and Yom Kippur must be observed on the actual day they occur is due to the expression “b’etzem hayom hazeh” (“on this specific day”) which is used in reference to each of them.[5. Yechezkel 24:2; Vayikra 23:28; Aruch Hashulchan, OC 549:2.] For this reason Asara B’tevet and Yom Kippur are never advanced or postponed.

When Asara B’tevet occurs on a Friday, the fast must be observed until nightfall even though this requires one to enter Shabbat while hungry, fasting, and distressed which is generally to be avoided.[6. Yabia Omer 6:31.] The Friday Shacharit service remains the same as if the fast would have occurred on any other day of the week. So too, at Mincha, the Torah and Haftara are read and “aneinu” is added in the Shemoneh Esrei as normal. Tachanun and Avinu Malkeinu, however, are omitted.[7. Aruch Hashulchan, OC 550:2; Mishna Berura 603:3.] It is interesting to note that there once existed a custom not to read the Torah at Mincha when Asara B’tevet occurred on a Friday, but very few communities conduct themselves in this manner today. Indeed, there are those who argue that the custom likely evolved due to a misunderstanding of earlier sources.[8. Aruch Hashulchan, OC 550:2.]

All of the regular Shabbat preparations, including showers and haircuts, may be performed as normal when Asara B’tevet occurs on a Friday, even by those who normally refrain from such activities on fast days.[9. Mishna Berura 551:7.] Nevertheless, those who refrain from listening to music on fast days should refrain from music on Asara B’tevet, as well. Those who wear tefillin at Mincha on fast days must be sure to recite Mincha early in the day[10. Nitei Gavriel, Chanuka 62:4.] as it is improper to don tefillin close to the arrival of Shabbat.[11. Nitei Gavriel, Chanuka 63:4.] One who has the custom to taste the Shabbat food every Friday may do so on Asara B’tevet, as well, but one must be sure to only taste a small amount of food and spit it out without swallowing.[12. OC 567:1; Mishna Berura 567:6; Kaf Hachaim, OC 567:10.]

For the sake of convenience, it is permitted (and even encouraged) for congregations to recite Kabbalat Shabbat and Ma’ariv a little earlier than usual in order to allow congregants to arrive home and recite Kiddush precisely at nightfall.[13. Nitei Gavriel, Chanuka 63:6 footnotes 9, 10. For a very interesting discussion on the permissibility of accepting Shabbat early and concluding the fast at that time (and certainly before nightfall), see Nitei Gavriel, Chanuka, Sheilot U’teshuvot 14 and Yabia Omer 6:31.] Some authorities permit one to rely on a more lenient definition of nightfall in order to allow the Shabbat evening meal to begin as soon as possible.[14. Nitei Gavriel 63:7.]  Those who are especially hungry can recite Kiddush as soon as the fast is over and defer the singing of “shalom aleichem” and other preliminary zemirot for later in the meal.[15. Nitei Gavriel, Chanuka 63:8.] One who recites maariv early must be sure to repeat the shema after dark. Those who have the custom not to recite Kiddush between 6pm and 7pm should disregard this custom on such a Shabbat.[16. Nitei Gavriel, Chanuka 63:9.] It is permitted to rinse one’s mouth, such as with mouthwash, before reciting Kiddush.[17. Mishna Berura 271:13.]

There are a number of reasons why one should consider reciting Mincha especially early (“Mincha gedola”) when Asara B’tevet falls on a Friday. On the most practical level, it allows the lengthy Mincha service to be discharged early in the day, allowing one to devote the remainder of the day to Shabbat preparations. Convening Mincha immediately prior to the arrival of Shabbat forces people into an earlier Friday afternoon routine than they are accustomed to, which is likely to cause distraction, disorderly Shabbat preparations, and widespread late arrival to shul.[18. Minhagei Eretz Yisrael 27:28.]

Reciting Mincha early in the day is also recommended as one will still be wearing one’s weekday clothes at that time. On the other hand, reciting Mincha immediately prior to the arrival of Shabbat would force one to recite the mourning-flavored fast day prayers in one’s Shabbat clothes which is considered inappropriate.[19. However, there are those of the opinion that one should always wear one’s Shabbat clothes for Mincha on Friday, even on Asara B’tevet, regardless of the time of day one recites mincha. Nitei Gavriel 62:3.] It is also preferable to distance the mournful prayers of a fast day as far from the arrival of Shabbat as possible.[20. Devar Yehoshua 3:63, cited in Nitei Gavriel, Chanuka 63 note 4.]