The Problem of Apologetics 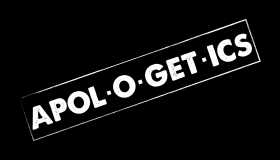 Students often find challenging the confrontation between Jewish tradition and their college studies. They are sometimes frustrated by their attempts to explain Judaism based on their newly acquired knowledge from the halls of academia. This encounter, when unsatisfying, has led many wonderful and thoughtful people to abandon Jewish tradition. However, the challenge is really a false dilemma, based on a mistaken premise. It is the problem of apologetics.

R. Reuven Ziegler writes in his Majesty and Humility: The Thought of Rabbi Joseph B. Soloveitchik (pp. 178-179):

Apologetics (from the Greek word apologia, meaning defense) results when a person accepts an external frame of reference as authoritative and tries to reconcile tradition with that external doctrine. When viewed this way, tradition becomes “problematic.” By forcing tradition to fit into a preconceived and alien framework, one effectively places it into the proverbial mitat Sedom, or Procrustean bed. This inevitably leads to distortion of the tradition, either by assigning it unlikely meanings or by ignoring that which does not cohere with one’s theory.

Rav Soloveitchik did not engage in apologetics. He had utter confidence in Jewish tradition and asserted its conceptual autonomy. He did not seek to “synthesize” or “harmonize” it with any other system of thought. Rather, he accepted Jewish tradition itself as his frame of reference, mining his vast erudition in fields of general knowledge for ideas which could shed new light on Judaism or enhance his understanding of man.

This non-apologetic approach characterizes the Rav’s entire relationship to secular knowledge.[1. While the Rav’s thought is non-apologetic in the sense that “there is no attempt to demonstrate that traditional Judaism is completely congruent with philosophy (or any part of it)” (R. Yitzhak (Isadore) Twersky, “The Rov,” in Rabbi Joseph B. Soloveitchik: Man of Halacha, Man of Faith, ed. R. Menachem Genack (Hoboken, NJ, 1998), 29), he does set out in his earliest major work “to defend the honor of the Halakhah and halakhic men” (Halakhic Man (Philadelphia: JPS, 1983), 137).] Imbued with strong faith and a secure sense of self, he was unafraid to expose himself to new ideas, nor did he place limits on his children’s reading. The fact of divine revelation, entailing both belief in God and a system of norms, could not be changed by whatever he studied. But his understanding of tradition and his ability to communicate it could be enhanced through the study of “the best that had been thought and said in the world.”[2. Matthew Arnold, Preface to Culture and Anarchy (1869), xiii.]

Thus, the Rav’s acceptance of Jewish tradition as his conceptual frame of reference justifies his selective use of concepts derived from Western thought. There are also internal philosophical reasons, as elaborated in The Halakhic Mind, which justify this selectivity. Unlike the “theories of everything” propounded by philosophers from Aristotle to Hegel, contemporary philosophy no longer trusts overarching and all-encompassing systems. As a good student of twentieth-century philosophy, Rav Soloveitchik realized that – philosophically speaking! – he was not beholden to any one school of thought. Therefore, he had the freedom to utilize insights from different philosophical schools without being enslaved to any one of them. This freedom afforded him much greater room for creativity than if the parameters and assumptions of a particular system had confined him.[3. Interestingly, the Rav made the same point when comparing the Rambam to the Ramban (R. Twersky, ibid., 43-44, n. 17). While the former was somewhat straitjacketed by an Aristotelian philosophical framework and had to express his ideas in its narrow jargon, the latter was freer to exercise creativity in his religious thought.]

This consideration led Prof. Yitzhak (Isadore) Twersky to conclude that “to quibble whether [the Rav’s] premises are medieval or modern, rationalistic or pietistic, to argue whether his thought should be described as existentialist or neo-Kantian, is not very edifying.”[4. Op. cit., p. 34.] Rav Soloveitchik was far from being an orthodox Aristotelian or Kantian who struggled to justify Judaism in light of his externally-conceived philosophy. Rather, he was a man of the masorah who creatively and critically utilized the most appropriate ideas he could find in order to understand and explain the Jewish tradition and the human condition.

The challenge of linguistics, history or any other subject to Judaism assumes that Judaism must be explained within these external frameworks. Rav Soloveitchik disputed this indignity. Judaism is conceptually independent and is not subject to judgment under any external framework of thought.
———