Should a Torah-Observant Jew Mark the American Thanksgiving Holiday? 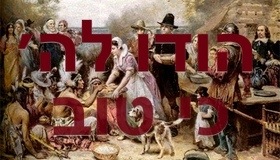 Should a Torah-Observant Jew Mark the American Thanksgiving Holiday?

Hanukkah as a Festival of Hodayah La-Shem (Gratitude to God)

Delivered by R. Joseph B. Soloveitchik at Congregation Moriah on December 6, 1966

In Hilchos Hanukkah 3:1-3, the Rambam provides a lengthy account of the events surrounding the Hanukkah story, something which he pointedly does not do in the preceding chapters that deal with Purim. Why?

The Obligation to Express Gratitude to God

The She’iltos precedes its discussion of Hanukkah saying that a Jew must always be willing to express praise and thanks (shevach and hodayah) to God for His miracles. There is a difference of opinion between Rambam and Ramban as to whether in general there is a separate mitzvah to express gratitude to God (the Rambam says there is none, as it is subsumed under the mitzvah of avodas Hashem she-be’lev, serving God inwardly, while the Ramban says there is one, insofar as there is no other general mitzvah under which it might be subsumed). But for both of them, whatever the mitzvah parameter might be, one is obligated to thank God for the chesed (kindness) that God bestows upon oneself, at the time (or shortly after) it is bestowed. Such for instance was the case with the Israelites at the splitting of the Sea of Reeds.

Should a third party beneficiary express such thanks, either at the time, or subsequently? The She’iltos continues: “subsequently on those days on which a miracle occurred, such as Hanukkah or Purim, one must bless God, as it says regarding Yisro ‘baruch Hashem Who saved you from the Egyptians.’” Why does the She’iltos reference Yisro, rather than other more obvious precedents for thanking God that are encountered throughout Tanach? The answer is that because Yisro praised God even though he was not a direct beneficiary of the chesed, we learn from him that we too must praise God on Hanukkah and Purim for the chasadim extended to our ancestors.

Purim, Hanukkah, and their Shared Foundation of Gratitude

The fundamental principle of both Purim and Hanukkah is the obligation to express hodayah (gratitude) for the events of those times. Thanksgiving is the shared yesod (foundation) of both festivals. Hence they both incorporate al ha-nissim in the thanksgiving sections of the Amidah and the Grace after Meals. Hence the al ha-nissim of Hanukkah concludes with “they established these eight days of Hanukkah to express thanks and praise (le’hodos u-le’hallel) to Your great name.”) Thus the Rambam treats both festivals in one unified section of his work, separating them only into disparate chapters.

With this foundation, we can answer another question. Why, immediately following the events of Purim, were the Sages opposed to Esther’s desire to make Purim a permanent feature of the Jewish calendar (Megillah 11a)? The answer is that they were concerned regarding the Torah’s prohibition (Deut. 4:2) of bal tosif (i.e., by adding a new festival they would be adding to the Torah’s commandments). Why then did they in the end defer to her and establish Purim as an annual celebration? Because they concluded that they would not in fact be adding to the Torah. For the Torah itself requires that we give thanks to God for His kindness, and an annual celebration of Purim would merely constitute a kiyyum (fulfillment) of this obligation. All that the Sages did was to mandate specific actions to be performed on Purim to express that gratitude, including the obligation of pirsumei nisa (making others aware of the original events involved). It is for this reason that the Rambam (at the end of Hal. 3) when presenting the required and prohibited acts of Hanukkah adds the apparently redundant words ke’kriyas ha-Megillah (“just like the reading of the Megillah.”) What he means to say is that the rabbinically required actions mandated for Hanukkah are likewise not new but are rather a fulfillment of the obligation to express gratitude to God, just like the actions of Purim.

For the same reason, the Rambam writes there that the days of Hanukkah are yemei simchah ve’hallel (days of rejoicing and praise), insofar as Hallel is the quintessential expression of gratitude to God. So too the Hallel obligation extends to lighting the Hanukkah menorah. That is, it is not a separate mitzvah, but simply a kiyyum (fulfillment) of the Torah’s own obligation to serve God by expressing one’s gratitude to Him.

We can now consider a related question: on Hanukkah does the obligation to express gratitude to God require a detailed description of those events and their associated divine chasadim, or is a generalized statement of indebtedness sufficient?

On the one hand we can learn from Avraham Avinu (see Genesis 23:12: “Avram bowed down (to God) in the presence of the people of the land,”) that there is no need to be specific. So too the Hagomel and Hatov ve’ha-meitiv berachos do not detail the blessings for which we are thanking God. On the other hand Yisro’s expression of praise and the al ha-nissim formulation are relatively detailed? In my view the answer is clear: when an individual gives thanks for a chesed he has personally been granted, only a general reference to the chesed is in order. When the chesed is granted to Klal Yisroel a more specific description is necessary. Hence on Hanukkah we go to significant lengths in expressing our indebtedness to God for His salvation. To that end al ha-nissim and biyemei Matisyahu carefully delineate the contours of the salvation wrought, and the nightly lighting of the menorah reenacts the miracle of the oil.

Furthermore, the national-corporate nature of the gratitude of these days extends to facilitating similar feelings of indebtedness to God by our fellow Jews. This is the significance of the requirement of pirsumei nisa (bringing others to recognize the chesed, and causing them to acknowledge God as well). To this end the daily recital of Hallel proclaims hodu la-Shem ki tov, i.e., “nor only I but you too must give thanks to God for He is good.”

One may ask why, if this is the case, the personal gratitude expressed via the Hagomel blessing requires what could be considered the equivalent of pirsumei nisa, i.e., the public setting of a quorum of ten men who respond by acknowledging the personal chesed? The answer is that such a quorum has nothing to do with pirsumei nisa – it is rather, as the Ha’amek Davar explains, a reflection of the requirement that the korban todah (the sacrifice made in expression of gratitude) which is the template for the Hagomel itself, could only be offered in the Temple in the presence of ten men.

Other Aspects of the Expression of Gratitude

There are two further aspects of thanksgiving that should be noted. Firstly, it does not suffice to mention only the specific event in question. One must also reference all of God’s chasadim – as we see in the Grace after Meals which includes the generic fourth blessing of ha-tov ve’hameitiv, in the Hallel (that makes reference to God’s kindnesses from the beginning of Jewish history until the end of time), and in the Hagomel (that states she-gemalani kol tov, i.e., Who has granted me all kinds of goodness).

Secondly, we learn from this passage in the Rambam that we must acknowledge that we were entirely undeserving of what we received. This emerges from the Rambam’s omission of any reference to the people having turned to God in prayer in response to the oppression they endured. In the first Halachah he writes that “Israel endured great suffering because of the oppression, until the God of our forefathers took mercy on them, redeemed them, and saved them…” It is instructive to compare this to the account in Exodus 2:23-24, which says that “they sighed (va-yei’anchu) from their work, they called out (vayizaku), and the cries (shavasam) from their labor rose up to God, and God heard their groaning (na’akasam)” in extremis. The Sifri, and later the Ramban and the Or ha-Chayim, make it clear that these words depict inarticulate pain, anguish, and despair – but not prayer. The Israelites in Egypt did not petition God in prayer to save them. God, however, responded in His mercy as if they had turned to Him in supplication. This is similar to the secret of the Yom Kippur goat sent to Azazel, which according to the Ramban symbolizes the suffering of Jews which God in His infinite mercy accepts as if it were a sacrifice to Him even though that is not the conscious intent of the sufferer. So too with Hanukkah: the oppressed Jews did not cry out to God in prayer, yet God came to their rescue in an act of absolute and unsolicited chesed. The first one to express a similar sentiment was Yaakov Avinu, who in Genesis 32:11 unambiguously declared his unworthiness with the words katonti mi-kol ha-chasadim (I am undeserving of all the goodness that You have bestowed upon me). True gratitude can only take place when it includes an awareness of being profoundly unworthy of the gift received.

We can thus understand why the Birkas Hagomel includes the term la-chayavim (to those who are guilty), for it acknowledges that God bestows kindnesses on us when we are entirely undeserving of them. Interestingly, the view of the Magen Avraham is that a person can only say this of himself, but not of others, hence if a husband says Hagomel on behalf of his wife he should omit the word la-chayavim.

In other words, the thanksgiving of Hagomel incorporates an act of viddui (confession) and tzidduk ha-din (acknowledging the justice of God’s decree). Just as in viddui one declares ki emes asisa va—anachnu hirshanu (You have acted correctly even though we have sinned), so whenever we thank God we must express our complete unworthiness of what we have received, and hence commit to doing better in the future, i.e., to engage in teshuvah (repentance).

In short, just as the Seder night is primarily intended as an expression of thanksgiving and praise to God for the undeserved and unsolicited redemption that He bestowed on our forefathers (and by extension on ourselves) in Egypt and Sinai, so throughout Hanukkah the central focus must be to internalize, articulate, and then project a profound sense of gratitude to God for having saved our progenitors and ourselves “in those days at this time,” as the story of Hanukkah attests.