One Great Man Reflects On Another 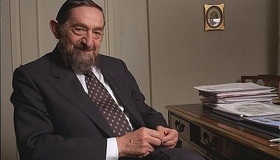 One great man reflects on another: Kurt Rothschild on Paul Reichmann

I sat down with Kurt Rothschild in the board room of World Mizrachi in Jerusalem to hear his reflections on the passing of Paul Reichmann, z”l. Kurt Rothschild is the honorary President of World Mizrachi and the beloved patriarch of the Toronto orthodox community, legendary for his philanthropy and stewardship of countless institutions. These are reflections of one great man of another, in his words. (Hebrew words are left as is, including the switch from modern Hebrew pronunciation to the traditional Ashkenazi pronunciation – for this communicates the comfort of the speaker in both)

I happen to cover the spectrum of the orthodox community. That is, while I am very actively and openly a Dati Leumi [Religious Zionist] person, Torah im derech eretz, I also personally financially support mosdot [institutions] of the Haredi network of schools in Toronto and to an extent in other cities–selectively, but I do so. The Reichmann family and most specifically the late Moshe, Paul, Reichmann are involved in a very big way in supporting the Haredi yeshivas, kollelim and schools, primarily in Toronto and in Israel. They, and again, specifically under the leadership of Moshe, spent very large amounts of money to build mosdos, to put up buildings or to help in putting up buildings and in the operation and educational costs of the yeshivot.

In their rise to great prominence and in the acquisition of very great wealth, they were without question the leading supporters of these mosdos who had an open door to, in particular, Moshe. Some of them were welcomed warmly and in a very supportive way. Many of them built a personal relationship with Moshe.

This has been reflected in the past few days in a very commendable way, in a very large number of roshei yeshiva, kollel leadership, Haredi school leadership who, even though in the last few years since the downfall of the Olympia & York empire, the Reichmanns and in specific Moshe could not give these places large amounts of money, they, in a very beautiful manner, expressed remembrance of chesed neurayich. They painted Moshe as an immense man of chesed, not only giving money but being interested in how the money is used.

On many occasions he bailed out mosdot who had gotten themselves into great hardship and great debt, but on the condition that once they got this large amount of money, they would not fall into the same pit and end up having the same difficulties a year or two later. In many instances this worked and in many others it didn’t. Not necessarily out of bad will but the ongoing needs of these yeshivas and kollelim grew quickly, servicing an ever larger group of students and avreichim [married kollel students]. These institutions were being supported by Haredi businesspeople but that proved insufficient for the enormous needs of these places.

The great virtue of Moshe was his immense generosity, his kindness to the people who came to see him, and his gracious giving. It is these things that are being stressed so much in these days since his passing.

As to my involvement, it was largely a matter of great personal friendship from the days the Reichmanns and I happened to settle in Toronto more or less at the same time. I was involved with them in tzedaka but also in business, as an electrical subcontractor in their buildings. The growth of my own company was very closely tied to the growth of Olympia & York. To the extent that I got involved in supporting a number of Haredi causes such as day schools and kollelim in Toronto, such as Beis Yaakov Hayashon, a large girls school of the Eida Haredis – it was due to my involvement with them.

I did not ask Paul or Moshe to support Dati Leumi causes and I never got involved in a political discussion or argument with them about this. He knew very well where I stood and he accepted it graciously, and I knew where he stood. For many years I ran scholarship funds for boys and girls going to Israel, both Dati Leumi and Haredi and he helped these scholarship funds which incidentally is being carried on by Leah Reichmann, his wife.

At one time very many years ago there might have been an opportunity to get the emerging haredi schools in Toronto to get support under the umbrella of the UJA Federation of Toronto. Since I was actively involved with federation, I tried to convince the Reichmanns to go along in such a relationship. I explained very clearly that federation would only require efficiency and number of students per class but would in no way interfere in the curriculum of the limudei kodesh. In fact this lack of interference by the federation in the curriculum is borne out in the case of the school Eitz Chaim, which gets very large support from the federation based on the financial standing of students and their ability to pay school fees. Or Bais Yaakov, who are not supported in the same way but get an annual allocation from federation.

But regrettably, Moshe’s hashkafa prevented him from accepting this suggestion. And as a result these schools are all on their own, depending largely on support of the Haredi population of Toronto. The Reichmann family was unique – they gave such very large support that when they were forced to reduce this support it was a devastating blow to the Haredi school system of Toronto. These schools continued to develop in spite of this blow, and while nobody gives support on the scale of the Reichmanns the schools do cover today a great part of their costs from private donations. This support is not necessarily sufficient and as a result, many of the schools are 2 or 3 months behind their wages.

Moshe himself never attended university and yet built a vast empire of real estate. He considered education important, in particular technical education, and so supported the Jerusalem College of Technology, Machon Lev, in order to give opportunities to religious students, be they army graduates, Dati Leumi or of Haredi background. Moshe and his brother Albert contributed to such causes.

What attracted me to the Reichmanns was their lifestyle – their great business integrity and how they conducted themselves, personally and in public, in a manner of Kiddush Hashem. We enjoyed a reciprocal relationship – for they shared with me a concern for welfare of people and of limmud and harbotzas hatorah [Torah study and dissemination].

I was never involved in any personal investments with them. And in fact, they had no partners in their business. Their business was totally and privately owned and financed, which proved to be a fatal error in the case of Canary Wharf and which caused their downfall. This perhaps may have been avoided if the project had been a partnership with banks, who as partners would have been forced to keep up with the construction. The construction at Canary Wharf was difficult in the beginning but in the end proved so successful — but only after the decline of Olympia & York, which was a great tragedy.

The Reichmanns were never involved in party politics of Israel or in the diversity of Jewish communal life in America and Canada. They quietly went about their business, their charity and their family life without political involvement of any kind.

The lifestyle of the Reichmanns never changed. Before and after the collapse of Olympia & York. They lived a bal habatishe life in beautiful but modest homes. They never used their money on extravagant luxuries and entertainment but lived a modest life, in good times and in bad. Their observance of the mitzvot, the observance of Shabbat and Yom Tov, the education of their children and other people’s children was paramount on the agenda. That was very much recognized by the Jewish and non-Jewish business community and by the educational and welfare component of the community.

And it is these things that are being given such mention and praise today now that Paul, the principal spokesman of the Reichmann family, lives no more.

Rabbi Reuven Tradburks is the representative of the Rabbinical Council of America in Israel. Before his aliyah in 2009, he served as a congregational rabbi for 23 years, the last 15 of which he was rabbi of Kehillat Shaarei Torah of Toronto.