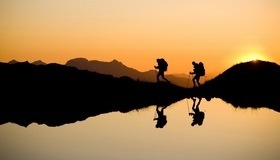 Ralph Waldo Emerson is quoted (possibly inaccurately) as saying that life is a journey, not a destination. Perhaps this idea can explain a textual anomaly in God’s command to Avraham to leave Ur Kasdim for the land of Canaan. Oddly, God does not tell Avraham where to go. “Go away from your land, from your birthplace, and from your father’s house to the land that I will show you” (Gen. 12:1). Why doesn’t God specify the destination? The answer lies, I believe, in a debate of Medieval commentators about the mitzvah to count the days of the Omer.

According to the Behag, the entire count is one big mitzvah and each day merely an additional step in the process toward completion. If you miss one day, you lose the entire mitzvah. According to most other commentators, each day is a separate mitzvah that deserves its own blessing. Therefore, even if you miss one day of the count, you can continue counting on the next day because it is an independent mitzvah (see Tur, Orach Chaim 489).

We can ask similarly about Avraham’s obligation to travel to Canaan. Was it one big mitzvah or was each step of travel a mitzvah in itself? Put differently, was the mitzvah in the destination or in the journey?

Avraham left Ur with his father, Terach; his wife, Sarai; his nephew, Lot; and their servants (Gen. 11:31). While they aimed for Canaan, they stopped in Charan, where Terach died. The rest continued on to Canaan. According to Ibn Ezra (11:31), the command to Avraham was given in Ur Kasdim and was the reason Terach and the rest left. (Ramban, ad loc., disagrees. See Radak and Mizrachi, ad loc.; the two opinions in Bereishis Raabbah 39:8).

Perhaps we can assume that Avraham was not commanded to make the journey on his own but his family was also commanded. If that is too bold an assumption, then we can at least suggest that they fulfilled an optional mitzvah by traveling to Canaan. Even if God only commanded Avraham, his family certainly fulfilled a mitzvah by accompanying him. For example, the midrash (Bereishis Rabbah 39:13) says that Lot was secondary, attached to Avraham when they left Charan. Ramban (Gen. 11:31) also explains that Lot and Sarai traveled because of Avraham. By accompanying Avraham, they shared in his mitzvah.

If the journey was one big mitzvah, then Terach failed to fulfill it. His death precluded his finishing the journey. But if each step along the way was a mitzvah, Terach accomplished a great deal with the portion he traveled. What of a child who reached maturity (bar mitzvah or the equivalent for a Noachide)? If each step is a mitzvah then his beginning mid-journey leaves him many mitzvah opportunities. But if the mitzvah is one big journey, then his ability to take part in it becomes similar to the question of a boy who becomes bar mitzvah in the middle of the Omer–a classic question which attracted much discussion. 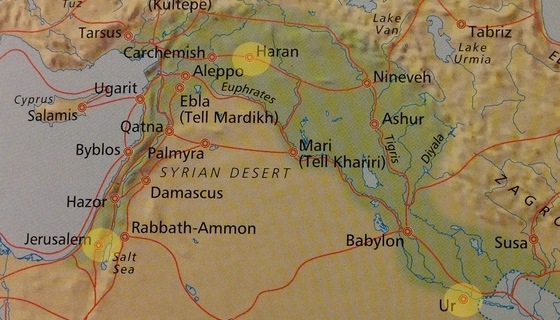 Similarly, my son suggested that if the journey is one big mitzvah then Avraham would presumably have been required to take the shortest route. But if the journey, rather than the destination, is the mitzvah then a circuitous and lengthy itinerary as acceptable. You are not delaying but extending the mitzvah.

Perhaps the language with which God commanded Avraham points in one of the two directions we have described. The lack of a destination’s name indicates that the journey is the mitzvah. Rashi (ad loc.) explains that this was intended to increase Avraham’s expectations, providing him reward with each step. Avraham’s vague command, his unique and unspecified mission, was to place his faith daily in God. He walked with the Lord to an uncertain destination, fulfilling a mitzvah at every point.

The map above is taken from James K. Hoffmeier, The Archeology of the Bible, p. 39, with the key points in Avraham’s journey highlighted

Kohanim and Levi’im, Staying in Their Lanes