The Rav on Shabbos Yom Kippur and Acher 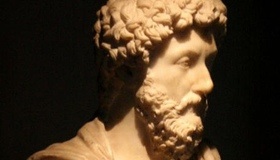 The following is a summary of the concluding section of a Yiddish lecture by R. Joseph B. Soloveitchik, given in November 1961 at a convention of Mizrachi-Hapoel Hamizrachi held in Atlantic City, NJ. It bears particular relevance to Yom Kippur that occurs on a Shabbos, as it does this year. I express my gratitude to Professor Barry Landy of Cambridge, U.K.

Do you think that Acher heard the heavenly voice well – and understood it correctly?

The Rambam (Hil. Teshuvah 7:5) states “the Torah has promised us that at the conclusion of the exile, the Jewish people will repent, and then immediately be redeemed.” We believe that no matter how deeply a Jew may be sunken in sin, and living a purely physical existence, there remains burning within him a ner Elokim nishmat ha-adam (“a spirit of man that is the lamp of God”-Proverbs 20:27). Therefore, one should never discount the possibility of his repentance. The Sages recount that when Acher rode a horse on Shabbos, his student R. Meir pleaded with him, saying “even you should repent.” According to the Talmud Bavli (Chagigah 15a), Acher responded, “I have heard it proclaimed from behind the partition ‘return O backsliding children (Jeremiah 3:14), except for Acher.’” As opposed to the Bavli, the Yerushalmi (Chagigah 2:1) quotes Acher as saying, “I once was riding a horse on Shabbos Yom Kippur past the Holy of Holies, and I heard a heavenly voice (bas kol) coming from the Holy of Holies declare, ‘return O backsliding children, except for Elisha ben Avuya.’”

Do you think that Acher heard the heavenly voice well – and understood it correctly? God forbid! After all, how can a heavenly voice make a determination that contradicts a foundation of the Jewish faith that “even if one is a heretic all his life, if he repents in the end, he is forgiven, as it says, ‘tashuv enosh ad daka’ (‘You return man to contrition’-Psalms 90:3) i.e., even (as the Yerushalmi puts it, at dichduchah (the moment when life is crushed).” How is it possible that the heavenly voice could deprive the great Tanna of this opportunity? True, he “caught a glimpse and was diminished,” but even then he obviously was still capable of hearing the heavenly voice, as he reported to his beloved student R. Meir. Acher certainly would not have told him a lie. What then did the heavenly voice want from Acher, who was such a profoundly and tragically alienated scholar?

There is something else we must ask. If the heavenly voice did not want Acher to repent, it should not have connected with him in the first place. And even then, why did it begin with the demanding words “return O backsliding children” – and then conclude with the awful damnation of “except Acher?”

I believe that we can find the true intent of the heavenly voice by examining the differing versions of this story as found in the Bavli and the Yerushalmi. And so we can ask: how in fact did the heavenly voice address this sinner? Did it call out to him using his real name, Elisha ben Avuya, or did it use his pseudonym Acher? The answer is very simple. The endearing words “return O backsliding children” were surely addressed to Elisha ben Avuya himself; it was he whom the heavenly voice pleaded with, and sought to draw near, like a mother who always finds something positive in her child. However the concluding phrase, “except for Acher,” was addressed to Acher. In this, the Talmud Bavli records the correct version of the words of the heavenly voice, by which the Shechinah sought to bring Elisha closer to herself while repulsing Acher. Why? Because the real Tanna, who was a Sage of Israel whom Rebbe (R. Yehuda Ha-Nasi) even quotes in Pirkei Avos (Avos 4:24), never sinned, never betrayed Knesset Yisrael, never identified with the Romans, and never sought to tear Jewish children away from Torah and the fear of Heaven. It was another person, Acher, who was the traitor.

Moreover, upon careful examination it becomes clear that the betrayal occurred in a remarkable way. One morning an alien soul insinuated itself into Elisha, convincing him that he was not really a student of the Sages of the mesorah, that Knesset Yisrael was not his mother, and that its future was not his future. Suddenly Elisha the Tanna was displaced by Acher, and it was Acher who deserted the beis midrash, produced heretical works, desecrated the Shabbos, and rejected everything holy and precious. All the while, the real Elisha remained hidden in the depths of his personality, an Elisha who never betrayed God or the Jewish people, but was a hostage of the pseudo-personality that was Acher.

Elisha knew God’s power, but he did not know his own power

And so it came to pass that on a certain Yom Kippur that coincided with Shabbos, Acher became deranged and publicly mounted a horse and rode it on the pathways of the villages, towns and cities of the land of Israel, as Jews looked out the windows of their synagogues in disbelief. “Who is this boor who has the audacity to violate the holy aura of Shabbos Shabbason?” they asked each other, stunned and confused. Then suddenly something remarkable happened. Inside that tragically misguided personality, the long dormant soul which had been lethargically sleeping in the depths of his being awoke, and in a moment pushed Acher’s hand to lead the horse in the direction of the Holy of Holies.

After all, why would Acher suddenly ride by the Holy of Holies on Yom Kippur, while publicly violating the day? Acher must himself have wondered what drew him to the Holy of Holies on the very day that was so powerfully connected to that place. Suddenly, the hidden soul, captive daughter of the King, demanded that she be heard, saying, “Elisha, you are not Acher! The dark soul who has enthralled you is not your friend, but your worst enemy! Elisha, identify rather with me, with your past, with your teachers and your colleagues! Come to me, push Acher away, he is not you, he is the very devil! Do you not see that you are drawn to the Holy of Holies like a magnet? It is Yom Kippur today, and God is waiting for all of us to come back to him. Elisha, do you not hear the heavenly voice that calls out to you to repent? As you pass by the Holy of Holies, do you not remember how the rebbe would speak of the avodah (Temple service) of the Kohen Gadol on this day? Elisha, assert yourself, listen to the heavenly voice, return O backsliding children!”

And thus did Elisha ben Avuya hear the heavenly voice that called on him to disassociate from the Acher who was his pseudo-personality, his false identity. But tragically, fate decreed that Elisha would make a terrible mistake. Instead of accurately hearing the words “except for Acher” (that were the actual words of the heavenly voice, as recorded in the Bavli), he erroneously heard “except for Elisha ben Avuya,” as the Yerushalmi records him hearing it. How did it happen? He had come to believe that he and Acher were one, and that he could thus not separate from Acher. What he heard was shaped by what was in his mind. And so he turned the horse away, and in that tragic moment the pure soul of the great Tanna disappeared, never to be heard from again.

The Yerushalmi concludes the story with the words, “he knew My power, but rebelled against Me.” Do you know why Elisha rebelled against the Creator, in spite of his greatness in Torah? Because he did not appreciate his own strength, and thus betrayed God. It is as if to say, Elisha knew God’s power, but he did not know his own power to overcome his outer Acher, and thus he turned away from God. His own weak self-awareness and his failure to “know himself” were the real cause of his tragic sin.

Indeed, Rabbosai, we have for many years worked with the non-religious, with sinners, because in each one we have recognized an Acher-like tragedy. We have believed that in every non-religious Jew there can be found an Elisha ben Avuya, who might from time to time arise, protest, and run toward the Holy of Holies, even if he is riding a horse on Shabbos Yom Kippur. Were it not for the hidden Elisha ben Avuya within them, they would not sacrifice for Eretz Yisrael and its people as they do. Many times, we engage in a bitter fight with the Achers. We struggle bitterly with their stubbornness, even as they do much damage. But even in the thick of such battles, we have never forgotten that deep inside all the Achers, there dwell Elisha ben Avuyas who are trying to purify them. True, many times they avoid the Holy of Holies so as not to hear or understand a heavenly voice. They prefer to not identify with holiness and the mesorah. Sometimes they feel that their way back to God is blocked, with no way through, so convinced are they by Acher, who is after all a master debater and dialectician.

But the day will yet come, when the heavenly call to return will be heard clearly, and the inner Elisha ben Avuya will arise from within the depths of their personalities. Then the great miracle will occur when “all of your children will be taught of Hashem, and great will be the peace of your children” (Isaiah 54:13).

More than fifty years after these ideas were articulated, their echoes reverberate with undiminished force. Many are the lessons and conclusions that a Jew, any Jew, can take from them. Here are but a few thoughts – I’m sure others can find their own.