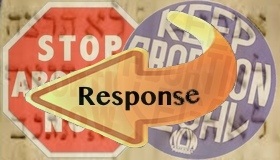 I read carefully R. David Shabtai’s well written article and find that I do not agree with his criticisms. Now is not the time or place to go into Beit Midrash disputations but I will attempt to reply to some points where I believe the critic has incorrect assumptions.

He states definitely that none of the Rishonim say that abortions are only a rabbinic prohibition. But I respond, why search for Rishonim when you have an open and simple case in the Gemara (Arachin 7a)? The Gemara allows killing the fetus so that the mother is not to suffer Innui Din? Is this child then a rodef, as the Rambam requires to permit abortion? Even more so, in that same source (Arachin 7a) Chazal permit aborting the child specifically so that the mother, sentenced to execution, not undergo a bloody birth on the way to her demise. If the prohibition would be Torah-based, how could they advise such a procedure for such a slight cause? In R. Shabtai’s learned article, he skipped this Talmudic quote, upon which I based my whole article. This opposes his major assumption.

As per his erudite comment that “Leika Mi-da’am ” that whatever is prohibited to the Gentile is simultaneously prohibited for Jews too, I think the critic overlooked my words in the Hebrew version of the article (Techumin 25, page 66), that this ruling is only according to Rabbi Yishmael, the minority opinion in that Gemara, while Halacha follows Rabbanan, the majority opinion. Therefore, Leika Mi-da’am is ruled out. In footnote 3, I cited six commentators who understood that the Rambam doesn’t give the ruling of Leika Mi-da’am. I also quoted Mishpetei Uziel, which says that even according to the Tosafot, the prohibition is only Rabbinic.

As to the Rambam basing the abortion permit in the rule of rodef, he did this to make the ruling rational, as the great teacher and educator constantly did throughout his writings. However, Chazal did not give that ruling, so you cannot rely on the reasoning to alter the law. To the contrary, Rashi (Sanhedrin 72b) gives the reasoning that until the fetus’ head exits, he has no individual soul. He is only a limb of the mother. This is the basis for my lenient ruling to permit abortions until the initial beginning of birth itself.

Concerning parents asking a rabbi for his ruling, certainly I agree. But that rabbi should be made familiar with the arguments that I collected. Many times, a rabbi might answer according to popular conceptions and notions, which are devout and cautious,but not necessarily proper to follow in cases of great difficulty. As the Talmud suggests (Berachot 9, et al), such cases must take the extreme circumstances into account, especially when dealing with a rabbinic prohibition. We see that the Rama adopts this attitude many times in his comments to Shulchan Aruch.

There is more for me to say but this not a personal dispute. Let the above suffice.

Rabbi Moshe Zuriel is the retired mashgiach of the Shaalvim Hesder Yeshiva and the author of over two dozen books on Jewish law and thought.