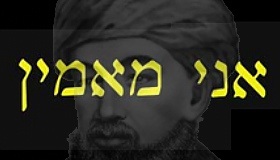 I. Afterlife and Resurrection

We can see that Rebbe adopts the same view as the Ramban from the discussion described in Sanhedrin (91a-b):

Antoninus said to Rebbe: The body and soul can exempt themselves from judgment. How? The body says, “the soul sinned….” And the soul says, “the body sinned….”

[Rebbe] replied: I will answer with a parable. What is this like? A human king who has a nice orchard…. He installed two guards, one lame and the other blind… [The lame guard climbed on the blind guard and directed him to steal from the orchard. The king] put the lame one together with the blind and judged them as one. Similarly, God will put the soul into the body and judge them together.

We see clearly from Rebbe’s words that the ultimate reward and punishment will be given to body and soul together. This corresponds with Ramban’s view that the primary recompense is after the resurrection, when body and soul are reunited. However, the Rambam, who believes that the primary reward and punishment is in the world of souls, cannot reconcile with Rebbe’s statement that the soul is judged together with the body.

Indeed, the Ramban (Sha’ar HaGmul, Mossad HaRav Kook edition, p. 300) proves that Rebbe agrees with him from another passage. In Sanhedrin (110b), Rebbe says that the ten lost tribes will return in the afterlife. We can infer that the afterlife is a place for physical existence and not just souls. (They are already in the world of souls and need not “return” to it -ed.)

We also cannot argue that the Mishnah really believes that the afterlife and resurrection are separate concepts. However, the Gemara later equated the two in order to explain that the punishment is measure for measure. In this way, one could say that the Rambam followed the Mishnah but not according to the Gemara’s explanation. We cannot say this because of the rule that an unnamed Mishnah follows R. Meir, who is also the earliest source of the concept that punishments are measure for measure (see Sanhedrin 100a). The Gemara is correct to explain the Mishnah as equating the two concepts.

II. Differences in the Rambam’s Words

I believe that in order to explain the Rambam’s position, we need to look carefully at his general approach to the Thirteen Fundamental Principles of Faith, which he lists in his commentary to this Mishnah (Sanhedrin, introduction to Perek Chelek) and codifies in his Mishneh Torah (Hilchot Teshuvah 3:6-8). One who compares these two versions of the Thirteen Principles will find a number of differences that demand explanation:

We can certainly find differences between the Rambam’s Mishnah commentary and Mishneh Torah, which were written many years apart. However, I believe that, in the case before us, we are able to reconcile the two texts without appealing to contradiction.

The Rambam organizes the thirteen principles in the Mishnah commentary as follows:

This division corresponds to R. Yosef Albo’s three principles in his Sefer HaIkkarim. In contrast, the Rambam presents a different division in Mishneh Torah (Hilchot Teshuvah 3:6-8):

(The Rambam (ibid. 3:6) describes three categories of deniers–deniers of the Torah (with three sub-categories), resurrection and redeemer. For the sake of simplicity, we divided and described it as above.)

Perhaps we can classify the categories in Mishneh Torah as follows:

(The source for this three-way distinction is in the Mishnah (Sanhedrin 90a) itself: “These have have no place in the world-to-come: He who states that there is no resurrection of the dead from the Torah, there is no Torah from heaven and the heretic (epikorus).” Resurrection corresponds to recompense, Torah from heaven to the connection between God and man, and heretic refers to a sectarian in Talmudic language. The Rambam reclassified heretic as sectarian and used the term heretic with another meaning.)

This distinction will resolve all the differences between the two presentations we discussed above.

The Rambam does this when his classifications are in the negative. However, when he explains the fundamental principles of faith in a positive fashion, he cannot omit belief in the afterlife. In Rambam’s opinion, the afterlife is the primary venue for reward and punishment. There is no connection between the afterlife and resurrection, and each must receive its own principle.

2. Rejection of the Oral Torah

According to the Rambam, belief in the Oral Torah is an integral part of belief in the Written Torah. This can be seen in the language of the eighth principle: “That the Torah is from heaven… And so, too, the explanations of the Torah….” Since, in his view, the two Torahs are one, he assigned them a single principle to emphasize their unity. In this, the Rambam is following his approach in the first essay (shoresh) in Sefer HaMitzvot, in which he includes all rabbinic commandments within the biblical commandment of “do not deviate” (Devarim 17:11). This unity of the two Torahs, itself a fundamental belief, is emphasized in the Mishnah commentary, where the Rambam explains the principles of faith on a theoretical level. However, when he undertakes the practical classification of different heretics, the Rambam only lists two types: 1) those who reject the Written Torah, and 2) those who accept the Written Torah but reject the Oral Torah.

We can also now understand the different placements of the tenth principle–God’s knowledge. In the Mishnah commentary, the Rambam functions as an educator, guiding the reader through the paths of faith, building a worldview step by step. Therefore, he organized the principles as we showed above: God, Torah, Recompense. First a person has to know his God; then he has to believe in the obligations God has imposed on him; and finally he must believe in the reward awaiting him for fulfilling those duties. Belief in God’s knowledge of human actions is a prerequisite for belief in recompense. Without knowledge, there can be no just reward.

The difference in the order of Mashiach and resurrection can also be explained with this idea. The Rambam, in the Mishnah commentary, is taking the reader one step at a time through the beliefs. The order of recompense is therefore chronological: afterlife, Mashiach and then resurrection. (The Rambam believes that the afterlife comes to a soul immediately after death — see Hilchot Teshuvah 8:1.) In Mishneh Torah, the Rambam lists the heretics according to their severity. As we explained above, a denier of resurrection includes rejection of recompense entirely. According to the Rambam, the Messianic Era is not a time for reward and punishment but the time that offers the greatest opportunity to earn reward in the afterlife. He writes (Hilchot Melachim 12:4):

The Sages and prophets did not desire the Messianic Era so they could rule over the world… and not so they could eat, drink and rejoice. Rather so they would spend time in Torah and its wisdom without resistance or disturbance, so they could merit the afterlife.

Therefore, the Rambam, in Mishneh Torah, listed a denier of resurrection and afterlife before a denier of Mashiach.

This loose translation was undertaken by R. Gil Student with R. Yaakov Ariel’s permission but was not reviewed by the author. Please consult the Hebrew original here (28 Iyar 5773).