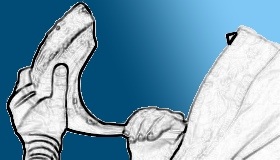 During the month of Elul, we observe the custom of sounding the shofar every morning after shacharit in synagogue. The reason for this custom is to inspire those present to begin the process of teshuva, in preparation for Rosh HaShana, the Aseret Yemei Teshuva, and Yom Kippur. This rationale is clearly articulated by the major legal authorities, including the Tur (א”ח ס’ תקפא)

Our sages instituted the sounding of the shofar from the first of Elul each year for the entire month in order to alert the nation of Israel to repent, as it is stated (Amos 3) “When the shofar is sounded in the city, will the people not tremble?…”

However, the day before Rosh HaShana, there is a custom not sound the shofar. There are two reasons suggested by the rishonim for this: (1) To distinguish between this custom of the sounding of the shofar during Elul, and the biblical commandment to sound the shofar on Rosh HaShana. (2) To cause confusion and disorientation for Satan, the angel who prosecutes against the Jewish People before God during times of Divine judgment, including the Day of Judgment itself, Rosh HaShana.

Maharil and Mateh Mosheh (cited by Eliyahu Zuta 551:3) state that due to this interruption in the sounding the shofar in synagogue, Satan will become disoriented and will think that Rosh HaShana has already passed. Their source for this is also the Sefer Minhagim, cited by Magen Avraham (see note 1).

This rather obscure reason for not sounding the shofar in synagogue on the day preceding Rosh HaShana (“in order to confuse Satan”) is well known among observant Jews, and it has led many scholars to raise numerous questions and objections. Are we really to understand this rationale as a literal belief that Satan, the angel assigned to prosecute against the Jewish People, will become confused because there is no shofar blown in synagogue on the morning of Rosh HaShana? Why does Satan fall for this simple “trick” every year? Has he not learned from our behavior every year for so many centuries? Why does neglecting to sound the shofar cause him to forget which day is Rosh HaShana? Can he not look up the date of Rosh HaShana on a calendar, as we do every year?[3] Perhaps a more serious question is the following: If Rosh HaShana is designated as the day when the Almighty judges the entire world, does it make any sense that this little “trick” would really cause G-d to change his verdict based on Satan’s absence at the trial?

I would like to offer my interpretation of what it actually means “to confuse Satan” [לבלבל את השטן]. To start with, there is a principle in the halakha that any activity we perform regularly for an entire month gains the status of habitual behavior. For example, on Shemini Atzeret we begin to say “משיב הרוח ומוריד הגשם” during the גבורות blessing. If we have not paid sufficient attention to our words during the Amida, and afterward we find ourselves in doubt as to whether we properly inserted this phrase, the halakha is determined by whether or not we are yet habituated to reciting it. If this situation occurs within 30 days after Shemini Atzeret, then the halakha is guided by a presumption that we did not say the phrase because we are not yet in the habit of saying it, and we are therefore required to repeat the Amida. If this situation occurs more than 30 days after Shemini Atzeret, then the halakha is guided by the opposite presumption—we assume that we did in fact insert the phrase because we are in the habit of doing so, and we are therefore not required to repeat the Amida.

We can apply this principle to the custom of sounding the shofar during Elul. The practice was instituted by the sages as a custom to help inspire teshuva before Rosh HaShana. However, to engage in this ritual for the entire month with no interruption before Rosh HaShana would put this teshuva in the category of automatic, habituated behavior. It might become a rote ritual that we automatically perform, without any thought as to what we are doing.

The sages teach, “הוא שטן, הוא יצר הרע, הוא מלאך המוות” (“Satan, the Evil Inclination, and the Angel of Death are all one and the same,”בבלי ב”ב טז..) This teaching means that there is no external, discrete Satan. There is no external source of evil separate from the human being’s inner desires and drives. When Satan is described in the Tanakh, midrashim, or aggadot, as a separate angelic entity, this must be understood as a metaphor for the Yetzer Hara. One of the primary methods employed by the Yetzer Hara to lead us to stray from duties that G-d has called upon us to fulfill is to lead us to minimize the significance of spiritual issues and obligations. Davening, learning Torah on regular basis, engaging in chessed activities, scrupulous observance of the so many areas of the halakha—it is very easy to become distracted from or apathetic to the importance of all of these elements of our religious life. In many ways, teshuva is a re-calibration our sense of priorities. The Yamim Nora’im were instituted by the Torah precisely to facilitate our collective engagement in this chehsbon ha-nefesh, in an examination of the degree to which we are or are not fulfilling our purpose. The goal of this teshuva is to restore our religious consciousness and spiritual sensitivity.

But what if our teshuva itself would become a rote, meaningless ritual (mitzvat anasham melumada)? If the purpose of teshuva is to break through the shell of apathy toward our spirituality, then to do it by rote would be completely inconsequential and meaningless. This is, I believe, what it means to “confuse Satan” by stopping the shofar blasts on erev Rosh HaShana. We will not allow our teshuva to enter the category of habit, as the yetzer hara would like us to. To the contrary, this break in the shofar blasts reminds us that our teshuva must remain authentic, and requires our full concentration.
———
[1] Rabbi Sholom Kamenetsky of Philadelphia informed me that the “Minhagim” which is cited by Magen Avraham as the source for this custom is the Sefer Minhagim of Rabbi Isaac of Tyrnau (late 14th century). After tracking down this book, it is clear that Rabbi Kamenetsky is correct, as that book states the following justification for this minhag (in the section, “Yemei Ha-Slichot”) שלא ידע מתי יהיה ראש השנה ויקטרג ח”ו (“So he [Satan] will not know when Rosh HaShana is, and will [therefore not be able to] prosecute, perish the thought.”) Eliyahu Zuta, in his commentary to Levush (א”ח תקפא ס”ק ג) states that this reason is also endorsed by Maharil and Mateh Mosheh.
[2] This discussion essay is limited to the custom to cease from sounding the shofar on the day preceding Rosh HaShana. However, the thesis developed here as to how to understand “confusing Satan” may serve as a basis to understand other minhagim as well. According to numerous rishonim, the notion of confusing Satan is the reason, or one of the reasons, for many of the minhagim we follow during Elul. The Talmud (Rosh HaShana 16a-16b) mentions confusing Satan regarding our conduct during the shofar blasts on Rosh HaShana itself. See Rashi, and Tosafot there. Also, Kitvei Ramban, Derasha Le-Rosh HaShana (Chavel, 242-243).
[3] See Rabbi Menachem Mendel Schneerson, Sha’arei Mo’adim, Rosh HaShana, “Elul” p. 49, for similar objections.

Nachum Klafter, MD is a psychiatrist, psychoanalyst, and professor of psychotherapy in Cincinnati, OH.