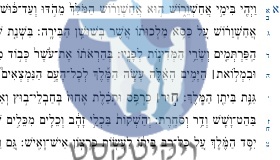 Miqra `al pi ha-Mesorah is a new experimental edition of the Tanakh in digital online format, now available as a carefully corrected draft of the entire Tanakh.[1. The first complete draft was finished on erev Shabbat Parashat Ki Teze, 10 Elul 5773; August 16, 2013.] It is based on the Aleppo Codex and related manuscripts, and consults the full range of masoretic scholarship.

There are currently two other important digital versions of the Tanakh online, but neither of them benefits from both of the above features:

The most visibly unique element of this new edition is that it has been formatted as a Tiqqun Qorim, by providing helpful features to the reader that are not always present in the manuscripts and older editions. For instance, when the final syllable of a word is not stressed, an extra ta`am has been added consistently in the proper place (pashta, zarqa, segol, telisha). Legarmeih and paseq are distinguished.[4. Implementation is still in progress on this feature.] Qamaz qatan has been added in full (all of the alternatives are documented where traditions differ about its application). These and many other stylistic features are described in chapter two of the introduction (in Hebrew).

The parashah divisions (parashah petuhah and parashah setumah) are indicated visually (not with the letters פ and ס), in way that maximizes their impact on a computer screen or in print, and is consistent with their use in the Aleppo Codex and by the Rambam. Sifrei Emet (the three poetic books Psalms, Proverbs, and Job) appear in an entirely new format (see the full text of Proverbs here for example).[5. The new format for Sifrei Emet and the reasoning behind it are discussed in detail here.]

Many more features can be added to the text in the future. Some volunteer programmers are already working on it offsite. Other volunteers who want to suggest corrections, add new features, or help improve this edition in any other way are welcome to make contact. Those who want to create derivative versions of it with special capabilities are also entirely welcome. The only condition is that they make their own work freely available to others under the same open terms as the work they used.

Some features of this edition are still under construction and not fully implemented (the most obvious being the markings for chapter and verse numbers). Here too, anyone who wants to help is welcome.

Readers and contributers are invited to copy small or large portions of this online Tanakh, and to otherwise use it (and even help to improve it!) in any positive way that furthers the study of Torah. The project is hosted at Hebrew Wikisource. To begin using the experimental edition, please go to its main index (or here for the weekly Torah readings and here for the Prophets and Writings).

2013-08-25
Seth (Avi) Kadish
Previous: Jewish Children Forced Into the Tsar’s Army
Next: Abortions That Are Kosher