The Most Important Discussions 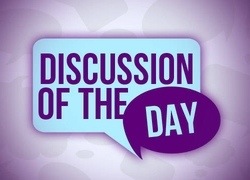 Recently, a self-described Orthodox Rabbi wrote what has become a highly controversial article challenging the authorship of the Torah. His radical approach, which shares more in common with the conclusions of academic Biblical criticism than with traditional Rabbinic Judaism, garnered a harsh reaction and prompted a firestorm of articles, posts, and blog entries. Many immediately declared his views heresy and called into question his status as orthodox.

Even the Yeshiva from which he received Rabbinic ordination felt obligated to pen a statement. Its president wrote, “Rav Z. is thinking honestly and personally, but his ideas are different from, and in some ways contradictory to, what we teach and ask our students to believe… His beliefs on this matter are his own and far from the broad classical views of Torah Min Hashamayim that we at the Yeshiva believe in.”

I reference this article not because I want to discuss its contents, merits, or appropriateness. In fact, though an analysis of the article is important and a discussion of the limits and boundaries of orthodoxy are critical, I don’t want to talk about the article at all. It is the volume and intensity of the reaction to the article that I believe deserve to be addressed.

To be clear, I am not minimizing a discussion of the authorship of the Torah and I understand that our religion comes with theological principles, boundaries, and challenges. In contemporary times, with children and adults having easy access to the compelling – at times, even seductive – arguments of Biblical criticism, we must introduce courses on our beliefs to the Jewish Day School and Adult Education curriculums. My question is not with the importance of the conversation; it is with the disproportionate assessment, in my opinion, of how important this discussion is in Orthodox Judaism right now.

In the “7 Habits of Highly Effective People,” Stephen Covey made famous the time management matrix that contains four quadrants – Urgent/Important, Urgent/Not Important, Not Urgent/Important and Not Urgent/Not Important. He argues that we spend way too much time on that which presents itself as urgent even if it is unimportant, but neglect and fail to address the non-urgent, yet very important work that will truly yield the greatest productivity and success.

It seems to me that Covey’s prescription for time management is highly appropriate and profoundly needed for the agenda-setting of the Jewish community. We seem to react to everything that presents itself as urgent even when it is not, in the greater scale of things, critically important, while we neglect issues that are of critical importance even if they don’t present themselves as urgent. Our attention, resources, and energy get focused on a controversial position taken in an article, or to provide tehillim rallies or funds to those that scream the loudest, take out the most colorful ads in Jewish media or acquire an endorsement from a “Gadol” who likely didn’t fully understand the issue to which he has attached his name.

A few years ago, two Jews were in prison simultaneously. One, an orthodox Jew who admittedly performed a crime and broke the law, received a particularly harsh and punitive sentence. The other, a secular Israeli who was risking his life serving in the IDF, was kidnapped by terrorists and held in unknown conditions. I remember my disbelief as I would receive emails and read full-page ads raising money for and holding tehillim rallies on behalf of the confessed criminal with a harsh sentence, with relative silence on behalf of our soldier who remained in captivity.

Who sets the agenda of the Jewish community? How should we dedicate our resources, energies, talents, time, and focus? How do we prioritize our collective to-do list? It seems to me that our agenda is being set for us by the media, zealots, and what topics attract the most attention on social media. If we are going to make a dent in fixing the problems in the orthodox Jewish community, we cannot simply have a reactive agenda, but we must articulate a proactive one that includes areas that may not seem urgent, but yet are critically important.

One might say authorship of the Torah and Biblical criticism is vitally important as we are losing observant Jews to those beliefs and they are abandoning an observant lifestyle. Surely there are thoughtful Jews grappling with these issues and an articulate and persuasive response by us may keep them in the fold. Yes, communicating the capacity to engage scientific thinking and traditional Judaism without compromise is a worthwhile exercise.

But let’s be honest. How many Jews do you know who stopped keeping Shabbos, began eating non-kosher, or entered a relationship with a non-Jewish woman because they couldn’t reconcile the authorship of Exodus and Deuteronomy? It seems to me many more are walking away because of the issues that we are not discussing broadly. Here is a short list of topics just off the top of my head that seem more “important discussions for the Orthodox community” right now than Biblical criticism:

The list could go on and on, but we, the organized community, must pause to actually create it, prioritize it, and then pursue it rigorously in order to make meaningful contributions to our future.

I look forward to studying the topic of the authorship of the Torah and a response to Biblical criticism with you later this year. In the meantime, let’s dedicate our focus to finding solutions to the truly most important discussions facing the Orthodox community. I welcome your input and partnership in addressing these questions and in stimulating discussion on these important areas.

Rabbi Efrem Goldberg is the rabbi of the Boca Raton Synagogue and a Vice President of the RCA.