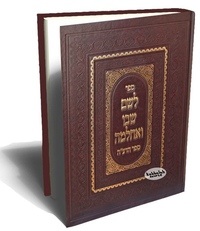 Words have meanings. If I ask your permission to shoot you with a pellet gun, wouldn’t you want to know whether “pellet” means a foam ball or a metal cylinder? If, when stating key beliefs–definitional propositions–we attach idiosyncratic definitions to common terminology, we confuse, mislead and possibly lead others to sin. This issue occupied the minds of great kabbalists of the last century.

God’s unity, His complete indivisibility, is challenged by kabbalistic terminology. I write this with awareness that the mystical metaphysics of Kabbalah are well beyond my training and expertise. Instead, I rely on (my best understanding of) R. Bezalel Naor’s recently published Kana’useih De-Pinchas, in which he presents and analyzes select letters from the archives of R. Pinchas Lintop, a little-known East European kabbalist of the early twentieth century. R. Lintop was a friend and colleague of R. Avraham Yitzchak Kook and R. Shlomo Elyashiv. These three kabbalists represent three trends in Kabbalah as well as communal orientations.

R. Elyashiv, whose famous grandson recently passed away at a ripe age, published guides to Kabbalistic thought, the first under the title Hakdamos U-She’arim, part of his series Le-Shem Shevo Ve-Achlamah (for which he was called “The Leshem”). One of R. Elyashiv’s particular stances outraged R. Lintop, who complained to both the author and R. Kook. While we do not have any response from either recipients, R. Naor is able to infer R. Kook’s response from other writings.

The debate revolves around an esoteric but crucial point. According to R. Elyashiv, the vessels (keilim) of emanation (atzilus) are not divinity but rather united with divinity via the lights (oros). In this, he follows R. Moshe Cordovero and the school of the Vilna Gaon. R. Lintop furiously argues that this contradicts the teachings of R. Moshe Chaim Luzzatto (Ramchal) and Chabad chassidus, according to which the vessels possess divinity.

R. Naor suggests that this debate hinges on another we have recently discussed here (link). Is God’s self-contraction (tzimtzum) literal or figurative? According to the Vilna Gaon, it is literal; God does not inhere in everything. According to Chabad teachings, tzimtzum is a metaphor and God is everywhere.

While esoteric, the debate is fundamental. What do we mean when we say that God is one? If other entities contain divinity, is not the phrase “one with a oneness for which there is no comparison,” in Rambam’s formulation, distorted beyond recognition? This was presumably a factor in R. Elyashiv’s arguments. R. Lintop’s response can be seen in two steps. On the one hand, he was following what he considered canonical sources. He was not innovating beyond the limits but following received tradition, which, by definition, is within accepted boundaries.

The second step must be seen as profound intellectual honesty. R. Naor publishes another passage from R. Lintop’s writings in which he denies that Rambam’s formulation of fundamental principles is the final word. He argues at length, long preceding the current debates over fundamental beliefs, that many great rabbis have disagreed with the Rambam about the existence of principles. In other words, he may agree that his position may not fit within Rambam’s definition of God’s oneness; he does not attempt to creatively redefine it by distorting words. However, that does not concern him because he does not consider specific principles binding.

Others, of a less radical bent, may take a different second step. Rather than denying the existence of principles, they may argue that the consensus, the kabbalistic tradition, accepts a slightly different formulation of God’s unity that allows for divine vessels. Because they follow tradition, which they believe is ancient and inspired, Rambam was the one who innovated and not them.

We have no record of R. Kook’s response. We know he corresponded with R. Lintop on other matters and presumably received two letters from him on this subject. We also know that R. Kook saw this part of R. Elyashiv’s book in manuscript and actually convinced him to soften his language against those who understand tzimtzum non-literally. To R. Elyashiv, the non-literalists are akin to Pantheists, close to Polytheists. To R. Lintop, the literalists reject divinity, bordering on Atheism. These are strong charges, indeed.

R. Naor found other places in which R. Kook said that he wished to merge the Kabbalah of the Misnagdim and Chassidim. How he planned on reconciling these opposites is unclear. It is hard to believe that he would accept the inherently illogical argument that since debate exists about what God’s oneness means, anyone who claims to accept it, regardless of how implausible that assertion, is adhering to traditional Judaism. Unclarity is not permission for chaos. More reasonable is the claim that since both sides follow respected traditions, both are acceptable. We can be sure that he did not share the antagonism of either side. I suspect that R. Kook’s tradition of reconciliation currently dominates.