The Importance of Leadership Styles 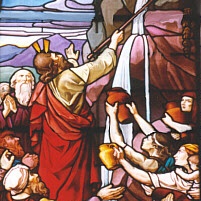 Rabbi Shmuel Goldin is the rabbi of Congregation Ahavath Torah in Englewood, NJ, served for many years as an instructor in Bible, Philosophy and Talmud at Yeshiva University, and is currently President of the Rabbinical Council of America. This essay and many more can be found in his recently published Unlocking the Torah Text: Bamidbar.

Many years ago, Rabbi Harold Kanatopsky, a brilliant teacher and orator who served as rabbi of my community during my teenage years, offered a new, innovative approach to the events at Mei Meriva [Moshe’s sin when hitting the rock – Num. 20:1-13]. So profoundly did this approach impress me that I have not only remembered it and quoted it over the years, but I have also added some thoughts of my own. I can no longer remember where Rabbi Kanatopsky’s ideas end and mine begin, but the foundation of this approach is certainly his.

To understand the events at Mei Meriva, we first must add to the puzzle.

As the Rashbam notes, this is not the first time that Moshe finds himself in the circumstances presented at Mei Meriva. An almost parallel event occurs earlier in Moshe’s career. Shortly after the Exodus, at a location known as Refidim, the Israelites find themselves without water and converge in complaint against Moshe. On that occasion God distinctly commands Moshe: “And you shall strike the rock and water will issue forth from it and the people will drink.”[Shmot 17:6]

This seems to make our questions concerning the events at Mei Meriva even more troubling. How can Moshe be blamed, as Rashi and so many others claim, for striking the rock at Mei Meriva when that was exactly what he was told to do – with success – on a previous occasion? Even more importantly, why does God command Moshe at Refidim to strike the rock and at Mei Meriva to speak to the rock? Given the similarity between these two parallel episodes, why does God change His instructions in such seemingly arbitrary ways?

Upon consideration, there is one powerful variable between the episodes at Refidim and Mei Meriva: the Israelites themselves.

As we have noted (see Unlocking the Torah Text, Korach 6, Approaches B; Points to Ponder; Chukat 2, Approaches D), the transition between these two generations marks a major paradigm shift in God’s relationship with His people. Over a forty-year period, the nation moves from the relational level of yira, fear and awe, to the level of ahava, love.

The erstwhile slaves who comprised the generation of the Exodus and Revelation were able to relate to God only on the primitive plane of fear. Shaped by their decades under the taskmaster’s whip, they responded to brute force and power. God, therefore, commanded Moshe at Refidim to speak to this generation in a language that they could understand. Strike the rock, He commanded, and let the Israelites recognize the power of their new heavenly master.

Forty years later, at Mei Meriva, a new generation has emerged that has not known slavery on an adult level. Nurtured under God’s watchful care, this generation has learned to relate to their Creator through the more mature dimension of ahava.

God therefore commands Moshe: Take the staff. Show the people that you can use it, but that you deliberately will not. Instead, speak to the rock and, in doing so, “speak” to the people. Demonstrate to them, at this critical moment, that the power of love is infinitely stronger than the power of brute force. Through love, I will provide for them now; through love, we will relate to each other across the pages of time.

Confronted again by the bitter complaints of the Israelites, he flashes back to Refidim. He sees before him not the Israelites of the day, but their parents and grandparents of yesteryear. Nothing has changed, he concludes. These people still understand only the power of the staff.

And in that one fell instant, as Moshe lifts his staff to strike the rock, he fails to transition with his people from one generation to the next, from one relational level to another. This failure seals his fate. He and Aharon (who makes no move to stop his brother) will remain forever part of their generation, consigned to perish in the desert without entry into the land.

Far from a minor misstep, Moshe’s actions at Mei Meriva emerge as a fundamental failure of leadership. This greatest of leaders remains rooted in the past, unable to respond to the internal changes that have transformed his people. God’s seemingly drastic response to Moshe’s failure at Mei Meriva now becomes understandable. Sadly, Moshe’s time has come and gone. A new leader must now emerge – a leader who will be able to transition with the next generation in its march towards a glorious future.