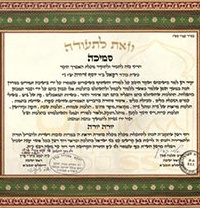 Late June is graduation time. As seminaries ordain new clergy, ready to go out into the world and lead communities, it is worthwhile to review what some great Torah scholars have written about the main functions of a community rabbi. In a recent article, R. Hershel Schachter quoted Prof. Saul Lieberman’s responsum demonstrating that ordination includes permission to serve as a rabbinic judge (dayan). We can look at other evaluations and see similar sentiments.

I recently stumbled onto a fascinating book by R. Moshe Lowenthal titled Serarah She-Hi Avdus: Sugyos Be-Rabbanus Ha-Kehillah.1 In a compelling style, freely mixing halakhah, history, advice and personal experience, R. Lowenthal explores at length the roles, responsibilities and opportunities of a community rabbi. In section 2 chapter 1, he quotes historians and halakhists who discuss the primary functions of a community rabbi. Everything I quote here is from his book, but I cannot quote everything. Note that these are just brief lists of a rabbi’s main tasks. It is not surprising that scholars disagree about which are considered “main.”

Many like to cite R. Joseph B. Soloveitchik’s quote from his famous grandfather, R. Chaim, that the main job of a rabbi is to look after the underprivileged.2 This is certainly true but does not represent R. Soloveitchik’s full view. R. Lowenthal quotes an important footnote in R. Soloveitchik’s Chamesh Derashos that I present here in the translation found in The Rav Speaks (p. 189 n. 6):

If the position of the Rav [community rabbi] were connected solely with halachah, Din Torah and the spreading of Torah knowledge, then the halachah that one may not appoint a leader without first consulting the community would not apply. Rabbinic appointment would in that case be in the category of the appointment of a Sanhedrin or a Judge, which is effected from above…

If, however, the Rabbinate finds expression in socio-political functions (care for general welfare, kindness, charity, representation and the like), then he is not only a Moreh Hora’ah and Dayyan but also a leader and his appointment requires the sanction of the community. It is unnecessary to stress that the history of the Rabbinate endorses the second definition. The Rav has never been only the Moreh Tzedek, but also the faithful shepherd of his flock…

R. Soloveitchik directly addresses the important point that rabbis today function in many spheres. Some are more social workers than judges. R. Soloveitchik concludes that rabbis are both and have always been. Perhaps today the balance has shifted more toward administrator and pastor but that is a change in emphasis, not a historical break. Note, also, that R. Soloveitchik uses the category of a judge to evaluate the legal side of a rabbi’s function. In contrast to R. Soloveitchik’s vision of a dual role, R. Moshe Sternbuch (Teshuvos Ve-Hanhagos 2:722) rules that many rabbis serve only as social workers and therefore lose all tenure rights reserved for halakhic leaders.

R. Samson Raphael Hirsch describes the following primary tasks of a rabbi in a letter to a student:

R. Yechiel Ya’akov Weinberg5 writes that a rabbi’s job is to:

R. Lowenthal quotes R. Mordechai Auerbach, the rabbi of central Tel Aviv, who explained the above disagreement between R. Soloveitchik and R. Epstein. Each emphasized the area in which they excelled. They certainly agreed that a rabbi must do many things but each focused on their personal area of expertise.

Elsewhere in the book (p. 291), R. Lowenthal quotes R. Yechiel Ya’akov Weinberg in the name of R. Azriel Hildesheimer that, in the latter’s time (mid to late nineteenth century German), it was insufficient for a rabbi to only know Jewish texts; he also had to know how to reach out to the public and teach them about Judaism. R. Shlomo Dichovski quipped that in our day (contemporary Israel), the issues are reversed. It is not enough for a rabbi to know how to influence the community; he also has to know how to decide on matters of Jewish law. As R. Joseph B. Soloveitchik said, both areas are important rabbinic roles.

As newly ordained clergy set out to change the world, we wish them success in their rulings, judgments, teaching, caring and service.

Some prior posts on rabbinic ordination:

The End of the Hirhurim Blog

The Final Year of Hirhurim