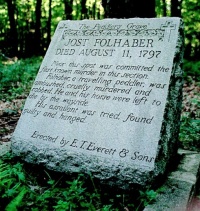 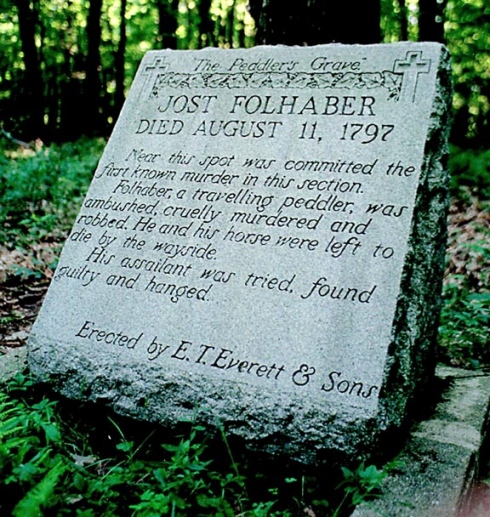 An article I wrote on the vanished Jewish community of Mahanoy City, Pennsylvania appeared in the summer 2012 issue of the OU’s Jewish Action magazine (link). My research into that small community of hard-working and honest Jews in the middle of Pennsylvania’s coal mining region was (and continues to be) extremely rewarding in so many different ways.

In the course of researching the Jewish history of Mahanoy City, I came across one fascinating tidbit that I have not yet seen discussed elsewhere.

Just outside Mahanoy City lies what is known as “The Peddler’s Grave”. There, a small tombstone commemorates the life of an innocent peddler named Jost Folhaber (or Foulhaver), who was robbed and murdered while passing through the area in 1797 (or 1810 according to other reports). The murderer — Benjamin Bailey — was soon caught, tried, and hanged for his crime. Jost’s slaying is remembered in an August 11, 1880 NY Times article[1] as “the first white man murdered by another in cold blood in the district that now comprises Schuylkill county”.

One particular detail in that 1880 NY Times account caught my eye: the reporter described the murdered peddler as “a Jewish person named Foulhaver”. I contacted a Mahanoy City area historian who shared numerous recorded accounts of the peddler’s murder with me. Aside from the NY Times article (written either 70 or 83 years after the slaying), no other source suggests that Jost Folhaber was Jewish.

Was a Jewish travelling salesman in fact robbed, murdered, and then laid to rest in “The Peddler’s Grave”? Or perhaps, in the 1880’s, peddling was so synonymous with Jews, that the writer of this NY Times article just assumed that having been a peddler Jost Folhaber must also have been Jewish?

Here’s a link to a recent news article on Peddler’s Grave:link

Here’s info from a blog: link