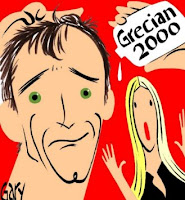 Can a man dye his hair? The answer is that it depends on why he wants to do it: Is it because he likes the way he will look with dyed hair or because of a practical benefit that he will receive if his hair is dyed? If, for example, people will respect him more or if his hair looks funny and dyeing it will save him from embarrassment.

The Shulchan Arukh (Yoreh De’ah 182:6) writes that a man may not dye even a single white hair black because it falls under the biblical prohibition of a man dressing like a woman. This seems fairly unequivocal.

In the mid-nineteenth century, the beard of a rabbi in Eastern Europe grew discolored and he asked the great rabbis of his time whether he is allowed to dye his beard to avoid the extreme embarrassment he was suffering. The Sho’el U-Meishiv (first seriess, vol. 1 no. 210) concluded that dyeing your beard black is only rabbinically prohibited. Since this rabbi was suffering extreme embarrassment, he was allowed to violate the rabbinic prohibition to alleviate the pain. Other authorities, however, ruled that he may not, including the Divrei Chaim (Yoreh De’ah, no. 62) and Maharam Schick (Yoreh De’ah nos. 172-173). On all this, see the Darkhei Teshuvah 182:17) and Sedei Chemed (Ma’arekhes Lamed, no. 116).

However, some later authorities disagreed. The Minchas Elazar (vol. 4 no. 23), who was the son of the Darkhei Teshuvah (and, I believe, actually wrote the last volume), disagreed in theory with those authorities who were strict but chose not to dispute them in practice. He concluded that the prohibition is only rabbinic, as above.

The Seridei Esh (Yoreh De’ah no. 41 in the new edition) has a long responsum on this subject. He argued that the entire prohibition is only against trying to beautify yourself. If, however, you have a pragmatic reason for dyeing your hair, then there is not even a rabbinic prohibition.

In an exchange of letters (Sefer Ha-Ma’or vol. 1 nos. 26-27), R. Elazar Meir Preil and R. Moshe Mordechai Epstein both argue similarly: There are two aspects to the prohibition against a man dressing like a woman — to try to pass as a woman, to beautify yourself like a woman does. A man can dye his beard (and presumably hair) in order to look younger to avoid hiring discrimination because that is neither for the sake of passing as a woman nor as a beautifying measure. (The Seridei Esh writes that he saw a responsum from R. Epstein in his Levushei Mordekhai, but I did not have the opportunity to look it up. It seems that he reaches the same conclusion but in a different context than his letter to R. Preil.)

One who is prematurely gray, and finds this to be a handicap with regard to marriage, or in obtaining a suitable position or appointment in his business or profession, is permitted to dye his hair in his natural color. This would also be the case if his intention is to avoid embarrassment, since the prohibition is essentially that a man is not to utilize women’s cosmetics or devices for purposes of adornment.

Of course, ask your rabbi before reaching any conclusion.