The Seder and the Symposium 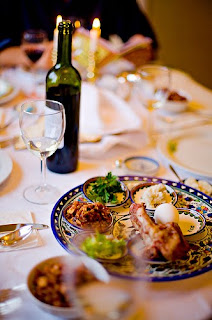 The striking similarities between the Passover seder and the Greco-Roman symposium have led some to believe that the seder is really just a Jewish version of this ancient secular event. I think that this is the wrong approach and have recently seen that Dr. Joshua Kulp says the same in his academic commentary published in the recent Schechter Haggadah.

I think most will agree that much of the seder has its origin in the times of the Mishnah, after the destruction of the Temple. Before then, Jews ate the Passover sacrifice with matzah and maror, and told the story of the Exodus. But much of the ritual we know as the seder did not exist. The four cups, reclining and text are all of rabbinic origin.

When the rabbis put together the ritual of the seder, did they intentionally copy the symposium to make a Jewish version of it? I think the answer to that is, “No.” They simply made the seder into a fancy meal, using the normal customs of their time. The goal was to act like free people, and that is how free people of their time engaged in festive meals. Here is what Dr. Kulp says about the subject (p. 196):

When the rabbis of the Mishnah wished to create a banquet meal to replace the sacrificial ritual lost when the Temple was destroyed, they did so in a form which was recognizable to them as the proper way to conducting a meal, all the while ensuring that they achieved their ultimate goals of studying Torah and recalling the Exodus. Indeed, we witness here a classic example of typical Greco-Roman practices (questions at a banquet) being combined syncretically with midrashic readings of the Torah (the child should ask the question). In contrast, children would not have participated in a typical Greco-Roman banquet. For the rabbis, a question to open the meal would affix their innovative practice of an ordered meal to their constitutive text — the Torah — all the while being recognized by people living at their time as the proper way of stimulating discussion at a meal.

With regard to rabbinic “assimilation” of Greco-Roman practice, the rabbis clearly were a group living in the Greco-Roman world, which they could no more avoid than we can avoid living in a world dominated by Western culture. Rather than using the loaded term “assimilation” in describing rabbinic practices parallel to the Greco-Roman symposium, I would say that the rabbis participated in this culture, rejected practices anathematic to their beliefs and implemented those which they did not find disturbing.

The question, of course, arises when the normal practices of a banquet change: Should we continue observing the seder in the Talmudic way? This was addressed in the Middle Ages regarding leaning. In Talmudic times, leaning while eating was a sign of freedom; it is how wealthy people ate in a symposium. When that no longer was the case, such as in Medieval Europe, the rabbis discussed whether to continue leaning during the seder. While there were dissenters, the consensus was to continue leaning, and that is what we do to this day. In other words, once the rabbis of the Talmud established the seder as a fancy feast of Talmudic times, we continue to observe our seder that way.