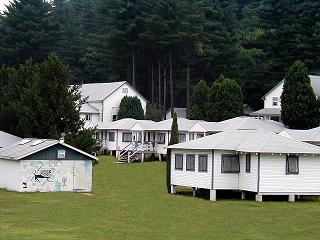 I Am Allison Benedikt, Well Not Exactly

In a recent essay, Allison Benedikt, film editor of the Village Voice, writes about her Zionist summer camp experience and subsequent alienation from it (link). Her piece has been called anti-Israel (link) but I don’t really see that. More than anything, I see myself in her story, which is perhaps why I read it more sympathetically.

Allison’s camp description was sufficiently familiar that I realized we had attended the same summer camp and Israel program. I confirmed this with my younger sister, who was a year ahead of Allison in camp. I recognized everything Allison described but I don’t consider it brainwashing, as some might infer from her description (although I doubt she meant it). It was a camp with a distinct ideology that included a single story, a very Zionist but also very left wing narrative of Israeli history. I remember when a former active member who became Orthodox visited camp for Shabbos, presumably visiting his brother who was on the staff (through an interesting twist in Jewish geography, I attended this brother’s wedding in Puerto Rico). The Orthodox brother spoke to the camp eloquently about his religious beliefs, noting that he was still politically aligned with the camp’s ideology. He joked that he once hitched a ride to a peace protest with Orthodox Jews and when they got there, all the others went to the anti-peace side and he went alone to the peace side. This was in the late 80’s when Peace Now was at its height.

My point is two-fold. First, Allison’s Zionist education was extremely left wing, pro-Israel and pro-peace. Second, I felt the same way as she as my religious trek took me far away from the camp’s ideology. In the early 90’s, Yeshiva University was, as it is today, decidedly pro-Israel and pro-setttlements. However, the school’s faculty and student body contained a healthy variety of viewpoints. As a student there, I was exposed to many different views on Zionism, including making the brief acquaintance with the American spokesman for the anti-Zionist Neturei Karta (whose mother lived in the neighborhood and whose views, for the record, I found repulsive). There were pro-peace, pro-Oslo Accords voices (this was the early 90’s) and very anti-Oslo sentiments as well. I remember when Yitzchak Rabin came to speak at YU and many were horrified at the prospect of honoring someone they considered to be so mistaken.

Most eye-opening to me was the radically different narrative of Israeli history I learned. Growing up, there were few heroes as great as Golda Meir. Yet in many sectors of the Orthodox community she was practically a villain. Not only was she virulently anti-religious, the alternate description goes, she was the reason thousands of Israeli soldiers died in the Yom Kippur War. Ben Gurion, as well, was an anti-religious bigot, whose main merit was that he exempted yeshiva students from army service. The mainstream YU Zionist narrative is much more accepting of these figures but my exposure to alternate points of view caused me to question all that I had previously learned. Were any of the Zionist myths I was taught true? Much like Allison, I needed to relearn the entire history of Israel.

Allison and I ended up in very different places, not least because of my day school and yeshiva studies. I married a Bais Yaakov girl and she married a gentile. I became an Orthodox rabbi and she a Village Voice editor. But we share an abiding uncertainty regarding Israel, presumably due to our later-in-life re-education. I oscillate between a pro-settlement view and a more moderate religious Zionism and she, on the opposite end of the spectrum, wavers between an anti-Israel position and a pro-Israel, pro-peace view. If anything, she is closer to her Zionist camp roots than I. As the pro-peace camp began to disintegrate following their apparent victory in the early 90’s that abruptly ground to a halt later that decade, many gravitated in their frustration toward what I would call an anti-Israel, or at least highly critical, position.

Like Allison, I feel compelled to reject as delusional the claims that Israel is a perfect democracy. Setting aside the Palestinian issue, the religious community is often subject to discrimination by overly violent police and to legal limitations on freedom of speech that seem to be enforced only on rabbis (link) and not imams or left wing politicans. There is much more to say about the culture and government but I hesitate out of love for the land. In short, the simplistic praises of my youth collapse entirely under scrutiny. However, with all its flaws, the country is still remarkably free considering its past and present challenges. The US was not built in a day nor, for that matter, is it free from criticism even after two centuries.

More than anything else in Allison’s article, I found her concluding sentence ironically troubling. Ironically because I feel the same way. Like her, some of my fondest memories are at the summer camp of my youth but I would never send my children there. However, my reason is strictly religious. I bear no grudge for the ultra-left wing Zionist education the camp provided even if I later rejected it. She seems horrified by it. The truth is that, much more than I, she has followed through on her left wing Zionist upbringing, taking its natural course as the world changed in the past twenty years.

I think Allison is terribly mistaken in her views on Israel. However, I see no need to attack her or condescendingly lecture her on what I believe are her errors. My only complaint to Allison is that she is too harsh on the camp of her youth. Idealism is good for the young and simplistic ideas are what teenagers thrive on. As you know, in real life nothing is either perfectly good or perfectly bad. Let kids enjoy a black-and-white view of the world. Let them become proud Jews and grow attached to their heritage. They will have plenty of time as adults to become cynical as they learn how complex life really is.